A member of the Wake County Schools Office of Equity Affairs announced she will be leaving the district as of Dec. 1. She is the second to leave the department this year.

Holler if you need a place to stay in California

Holler if you need intentional and strategic equity consulting, I’ll be @RISE_DEI

At the time of her hire in 2018, Mascareñaz was working for the Southern Poverty Law Center’s education offshoot “Teaching Tolerance,” which earlier this year was renamed as “Learning for Justice.’ Her original starting salary was $85,000 – well above the classroom teacher average. She was making around $86,708 as of 2019.

The tweet mentions “RISE DEI,” which is a limited liability corporation located in the Raleigh area. The company appears to have been created on April 29, 2021, according to records on file with the state.

Two Wake County Schools employees are listed on the RISE website alongside Mascareñaz. The first is Ryan Williams,  an assistant principal at Rand Road Elementary.

The second is Christina Spears, a special assistant within the Office of Equity Affairs (OEA). She is also the vice president of the union-affiliated Wake County Association of Educators.

Spears is also responsible for organizing and executing two “EdCamp Equity” events held on Wake County Public School properties. My reporting on EdCamp Equity gained national attention in March of this year in a City Journal article.  That article would be the first in a series by Christopher Rufo on the permeation of Critical Race Theory in U.S. schools.

Offerings on the RISE website include “consulting, training, speaking,” as well as promotion of the “Social Justice Standards” tied to the Southern Poverty Law Center, Mascareñaz’s employer prior to joining Wake County Public Schools.

Included in the list of RISE offerings is “Training using the Courageous Conversations framework, compass and four agreements.” This training is referring to Glenn Singleton’s Critical Race Theory infused signature course called “Courageous Conversations” and it is the same program the OEA has been using to train Wake County teachers. This could be a signal that Wake County Schools plans to farm out this kind of controversial teacher training in the future.

In both 2018 and 2019, Mascareñaz and the OEA made headlines for tweets instructing teachers not to “culturally appropriate” from Native Americans leading up to the Thanksgiving holiday season.

Teachers! Repeat after me:
I will not have my students make "Indian" feathers/clothes.
I will not culturally appropriate an entire people for "cute" activities.
I will tell my students the truth about this country's relationship with Indigenous people.#PinterestIsNotPedagogy

Do you teach Thanksgiving in a historical & culturally appropriate way? Are you centering voices of Indigenous people?
See links from NCDPI, @RaceJusticeEd about this crucial & often misrepresented part of our nation's history. https://t.co/yNrbP8RLWghttps://t.co/DBp2ioS4Bq

“I don’t feel comfortable with a generation of kids growing up thinking that Native Americans and Pilgrims sat down at a table together and everything was fine,” Mascareñaz said about the Thanksgiving tweet in a 2019 interview with the News and Observer. “As educators we should not be OK with that because it’s not the right story.”

Mascareñaz is the second OEA staffer to leave the department in the last six months. She was the second person to join the OEA, the first was its former head, Rodney Trice.

Trice was the OEA’s assistant superintendent and he resigned in May. His resignation follows my report at the North State Journal on a set of oversimplified Critical Race Theory talking points he delivered to the Wake County School Board.

Trice was hired by Wake County in 2014 to lead the OEA and his former position in Wake County remains vacant. His salary when he was hired in 2014 was$125,000.

As of his departure in May of this year, the district indicated Trice’s salary was $141,767.

Prior to working at the OEA in Wake County, Trice worked in the Chapel Hill Carrboro City Schools district. Shortly after his resignation in May, it was announced Trice was returning to Chapel Hill Carborro schools as the district’s “Chief Equity and Engagement Officer.” That district is paying Trice $161,94 for that role.

Prior to the departure of Trice and Mascareñaz, there were around eight to 10 staffers associated with the OEA. Their combined salaries in 2019 were over $650,000.

Staff salaries are a drop in the bucket compared to what the OEA has cost Wake County taxpayers. Since its inception in 2014-2105, the OEA has had expenditures of nearly $6 million.

The current total is likely higher because the data above does not include the 2020-21 school year. Staff salaries are not included in this total.

OEA pushes Equity at State Board of Ed

The OEA was behind the July 2019 “Equity” push at the State Board of Education which touted “leveraging student voices” to advance an “equity framework” that looks very much like that of the “Anti-bias Framework” created by the Southern Poverty Law Center’s offshoot, Learning for Justice (a.k.a Teaching Tolerance.)

Mascareñaz and Trice promoted the OEA and their work in a co-written article on the Learning for Justice website the following month.

“We believe that equity work is non-negotiable and must be part of the DNA of any school or district. It doesn’t matter whether we call it equity; diversity, equity and inclusion (DEI); or another title,” the pair wrote. “As leaders, we must all commit to this work. We must face the reality that we are in an ongoing fight to disrupt inequity wherever it exists.”

“In our district, we accomplish this by setting the conditions that encourage and inspire other educators to lead equity work: intentionally creating opportunities for new learning around equity challenges, changing attitudes and mindsets regarding equity challenges, and partnering with students and families who are closest to the gaps,” wrote Trice and Mascareñaz.

In 2020, right around the time the riots and protests over the death of George Floyd were occurring, the OEA rolled out a “Black Lives Matter” website.

The site prominently featured Patrisse Cullors, one of the three co-founders of Black Lives Matter (BLM). Cullors, known to be a Socialist, has also admitted to being a “trained Marxist.”

One section of the OEA’s BLM site included three-step instructions on “how to be an ally” to the BLM movement: 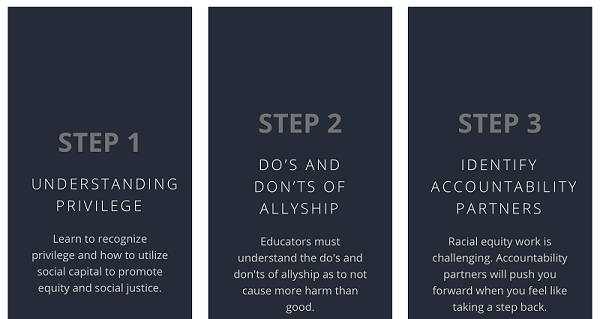 By August of 2020, angry parents had circulated a petition to remove it. Prior to the website being dismantled, there were changes made to the format which included Patrisse Cullors being basically edited out.

The OEA’s BLM website was registered by Trice. The site was taken down sometime after Mar. 23 of this year, which is the last time the Internet Archive’s Wayback Machine recorded a live capture of the site.

The BLM website is just one of many examples of the themes and  priorities of the OEA. 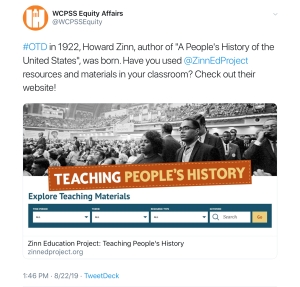 The OEA has no real accountability as I found out a few years ago when I asked the district for the goals and metrics used to determine the effectiveness of the OEA. I was told there were no metrics and that staff was evaluated individually.