This page serves as an archive of documents, resources, and articles on Leandro v. State of North Carolina and articles tagged “Leandro” on this website.

The Leandro case began in 1994 with a lawsuit centering on the state’s constitutional duty to provide an “opportunity for a sound basic education” to all public school students.

The name Leandro comes from one of the original plaintiffs, Robb Leandro, a former Hoke County high school student. The majority of Leandro’s over 20-year history was overseen by Judge Howard Manning but was reassigned to Judge David Lee in 2016.

The law firm of Parker Poe was asked by five low-wealth county school districts to handle the case. Families from five of those counties were original plaintiffs.

The main claim was that the state was not giving children the same educational opportunities in all districts. A key point was that the formula used for funding public education put low-wealth districts at a financial disadvantage because of the disparity in revenues school districts receive from local property taxes.

Leandro is over 20 years old and is extremely complex. The following milestones are not representative of the entire case picture.

A decent historical summary by NCbar.org is archived on the WayBack Machine.  The summary is dated, however, as studies have shown that pre-K is not as effective as initially believed.

Also useful is the 2003-04 report on Leandro II made to the NCGA’s Joint Legislative Education Oversite Committee (JLEOC).

1997: A North Carolina Court ruled that the state’s at-risk children have a fundamental right to the “opportunity to receive a sound basic education.” The ensuing trial lasted just over 14 months. One part of the ruling mandated pre-kindergarten for at-risk prospective students.

The Court defined at-risk students as students who met one of the following criteria: Member of a low-income family;  live in a single parent/guardian home; parents do not have advanced educations; are enrolled in free or reduced-cost lunch programs;  limited English proficiency; are a racial and/or ethnic minority.
(Leandro v. State, 346 N.C. 336, 347 (1997) (“Leandro I”).

2004: The North Carolina Supreme court upheld the previous lower court findings that a constitutional violation had happened; that at-risk children in the state were being denied their right to a “sound basic education.” The court did not agree with the lower court on pre-kindergarten mandates, calling it “premature” at that time. The Supreme Court then sent the case back down to the legislative and executive branches to come up with a solution to the constitutional violation.
(Hoke County Board of Education v. State, 358 N.C. 605, 632, 637 (2004) (“Leandro II”)

2017: A joint motion to hire an independent evaluator to review the case is made on the 20th anniversary of the case. At the same time, the State Board of Education filed to have themselves removed from the case. The board of education’s motion is later rejected.

2018: In February, Judge David Lee appointed WestEd to study and recommend a plan for the State to remedy the constitutional violation found in the Leandro case.  WestEd was tasked with making a final report to Judge Lee by March 31, 2019.

2020: Judge Lee’s consent order is a set of basic instructions giving the lawyers involved a 60-day window to submit plans on how to implement short-term goals. It was issued on January 21. Following the Consent Decree, Gov. Roy Cooper’s partisan“Sound education commission” recommended more school funding, but wouldn’t say how much. The latest reports by Cooper’s commission are on its website.

On June 15, the joint report to the Court was published: Fiscal Year 2021 Action Plan For North Carolina. Dr. Terry Stoops of the John Locke Foundation wrote an overview of what the plan entails, including around $426M in additional spending, for Carolina Journal on June 18.

In late August, the original judge in the case, Judge Manning, sat down for an interview where he blasted the idea that WestEd’s massive spending plan was going to make any difference.

“I realized money can’t buy you quality…You don’t just raise everybody’s salaries by $10,000 per year and expect to have all the grades go up by 20% because it’s not going to happen,” said Manning in the interview.

Sept. 1, Judge Lee signed the consent order. This puts the WestEd eight-year plan in motion with the foregone conclusion he will sign off on spending totaling $426.9 million. Of that spending, $235 million (55%) would go to just funding teacher raises.

The signing of the order comes around the same time that Education Week ranked North Carolina 15th in the nation in K-12 Achievement.

“North Carolina is also one of the most equitable states in the nation, earning a B for the “degree to which education funding is equitably distributed across the districts within a state,” writes John Locke Foundation’s Dr. Terry Stoops of the Education Week.

The day before Lee signed the order, lawmakers were made aware of his intent and issued a statement.

“Judge Manning had it exactly right when he blasted the focus on money instead of quality. Republicans have increased education funding by $1,748 per student, but that doesn’t matter if children aren’t being taught properly,” said Sen. Deanna Ballard (R-Watauga)

Ballard, who is a co-chair of the Senate Education Committee, continued “It’s so disappointing that the new Leandro judge, David Lee, wouldn’t even speak to legislators about this issue before issuing a consent order.”

In December, Judge Lee granted the request for an extension to the N.C. State Board of Education and Gov. Roy Cooper’s office for the eight-year plan that was supposed to be presented to the court. The new date set for this plan to be presented is Feb. 15, 2021.

2021: Cooper’s office and the Board of Education did not meet the Feb. 15 deadline. Judge Lee issued another extension of Mar. 8.  Assuming the governor and state board gets their act together for the Mar. 8 date and the plan is accepted by the Judge, the legislature will then have to fold it into their upcoming biennium budget and Cooper will have to refrain from vetoing it as he has for the last two presented to him.

A comprehensive remedial plan and appendix of implementation costs is submitted to the North Carolina Superior Court on Mar. 15. The 300-page report compiled by WestEd is very general and outlines around $8.29 billion in new state-level spending on schools over an eight-year period.  WestEd expects the federal government to pony up another $3.87 billion per year.

In short, WestEd’s report seems to think the problems will be fixed in eight years by forcing lawmakers to throw yet more money at the issues instead of actual, real instruction-related solutions.

It appears Judge Lee disagrees a bit with the spending part, and he’s right to hesitate given the bureaucratic gravy train that would be created by some of WestEd’s recommendations. On April 13, Judge Lee held a hearing at which he said he was not going to dictate to lawmakers how to spend the state’s education dollars.  EducationNC reported that Lee said, “I want this to be a cooperative effort with everyone having the same goal in mind.”

Of note in the laundry list of spending is $400,000 a year for a state “Office of Equity Affairs.” Interestingly, for the first time, the governor’s proposed budget also includes $800,000 for such an office.  Wake County created an Office of Equity Affairs which has not improved student or teacher outcomes but instead runs amok with social justice tropes, set up a Black Lives Matter website, and never-ending white privilege training for staff.

Judge Lee won’t sign any orders until after the State Board of Education gives some feedback and recommendations. Unless they hold a called meeting, the board doesn’t meet again until May 12.

On June 7, Judge Lee signed an order requiring the comprehensive remedial plan to be implemented “in full.”  Here are the provisions, including future deadlines for hearings and status updates: 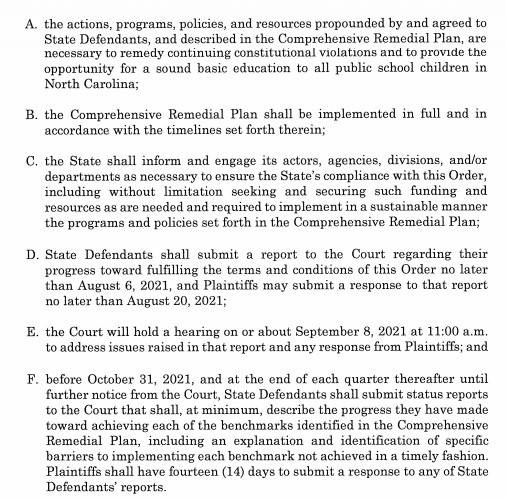 WestEd is a multi-million dollar non-profit that does education research for state and federal government.

The organization also has been hired by numerous think tanks and other education non-profits and has received over $17.6 million just from the Bill and Melinda Gates Foundation alone.

WestEd has been called into North Carolina several times in the past, including during the 2015 fight over Common Core. (More about WestEd in NC)