Emily Jean Durden, age 19, was arrested and charged with two counts of indecent liberties with a student, three counts of displaying material harmful to minors, and two counts of second-degree sexual exploitation of a minor.

“The investigation is still ongoing and if your child was victimized by Ms. Durden, please contact the Cleveland County Sheriff’s Office,” the release states.

Apparently, the School Resource Officer (SRO) at Crest Middle School was given information by a parent that a substitute teacher had allegedly sent inappropriate images and videos to their child.

The report to the SRO came in on Nov. 18 and the Cleveland County Sheriffs’ department began investigating. What deputies uncovered was Deputies said on Nov. 18, the School Resource Office at Crest Middle were sexually explicit conversations and videos shared by Durden with 13 and 14-year old students.

Various media outlets have reported that during an interview with law enforcement Durden admitted to sending the videos.

Cleveland County Public Schools has not yet issued a statement, however, it has been reported that Durden is now a “former” substitute for the district.

Durden does not hold a North Carolina teaching license, according to state records.

While Durden is only a substitute, she constitutes the 21st educator-related arrest tracked by this website in 2021.

The last time this website reported on an educator-related arrest in Cleveland County was in 2019.  At that time, Whitney Fite Baker, then age 28, has been arrested and charged with three counts of taking indecent liberties with a student. Baker, who taught special education classes, was issued a $25,000 secured bond at the time.

Fite was convicted in August of 2020 and was required to register as a sex offender for a period of “lifetime.”  Her victim was 17-years-old at the time. 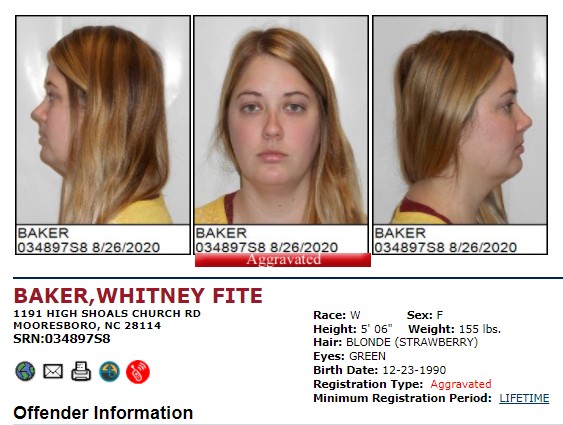 Was this article useful to you? Consider supporting the work of this site monetarily.

A.P. Dillon is a freelance journalist and is currently writing at The North State Journal. She resides in the Triangle area of North Carolina. Find her on Twitter: @APDillon_
View all posts by A.P. Dillon →
This entry was posted in A.P. Dillon (LL1885), CRIME, EDUCATION, Quiet Epidemic and tagged Cleveland County Public Schools, Emily Jean Durden, Quiet Epidemic. Bookmark the permalink.
Loading Comments...