As previously reported, the graduation rate in the state, as indicated by NC DPI, is 85.8%. However, the grade level proficiency and career and college readiness of students in key subject areas of English and Math remain nearly unchanged and low.

The End of Grade (EOG) exams are given to students in grades 3-8. They consist of two exams, math, and English.  Science exams are added in grades 5 and 8.

A look at the overall results of all EOG’s shows a state grade-level proficiency rate of 56.3%.

The previous year’s state grade-level proficiency rate was 55.7%. This represents an increase of just .6%.

This represents an increase of just .9%.

The state has been using the Common Core State Standards for four years, yet overall, the needle barely moved in the ‘career and college ready’ category.

The grade level proficiency is 56.3%, which is the same as the previous year.

Common Core Has Had Negligible Impact
For all the talk of Common Core being what’s needed to raise achievement, the standards do not appear to be making a dent.

Students who were in Kindergarten during the 2012-13 school year were the first to be exposed to Common Core. Those students would be entering 4th grade this year and would have been in 3rd grade last year.

Below is a comparison of the 2015-16 3rd grade EOG’s versus the previous year. These students, like the students the year prior,  have only been taught using the Common Core State Standards.

In a statement to the News and Observer, NC Superintendent June Atkinson blamed pre-k enrollment limitations and parents not enrolling their kids in Summer reading camps as possible explanations for the drop. Atkinson left out Common Core as a possible factor.

“Possibilities for the decline include not enough spaces in prekindergarten for students who need to prepare for school, teacher turnover in the early grades, and parents not enrolling children in summer reading camps that are designed to help students catch up, Atkinson said.”

Breakout by Ethnicity
The breakout of minority scores for the same grade level (3rd grade overall EOG) showed no improvement but instead decreases.  The first and highlighted score below is career and college readiness. The second score is grade-level proficiency.

Comparing the 3rd-grade EOG overall percentages between 2014-15 and 2015-16 white students saw little to no gains. 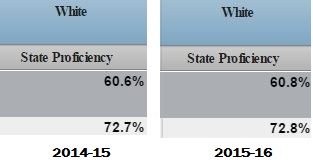 In fact, career and college readiness only ticked up a mere .2% and grade level proficiency ticked up .1%.

Asian students, by comparison, inched up only slightly but made the biggest gains of any racial group.

Career and college readiness increased  1.3% and grade-level proficiency up 1.4%.

A.P. Dillon is a reporter currently writing at The North State Journal. She resides in the Triangle area of North Carolina. Find her on Twitter: @APDillon_ Tips: APDillon@Protonmail.com
View all posts by A.P. Dillon →
This entry was posted in Common Core, EDUCATION, NC DPI, Testing and tagged Common Core, EOG. Bookmark the permalink.