Over the years, I’ve encountered highly questionable, inaccurate and slanted materials from Teaching Tolerance, which is an offshoot of the controversial Southern Poverty Law Center (SPLC). (As of Feb. 2021, Teaching Tolerance has been renamed to “Learning for Justice.”

Teaching Tolerance has been around for a few decades and has slowly over time built up a large following of teachers in large part due to the lure of “free resources” and other “free” teaching tools.

The SPLC and Teaching Tolerance consider parents who advocate for their child to be enemy combatants, as evidenced by their attack on parents objecting to Common Core.  As a front line fighter of Common Core, I was surprised Teaching Tolerance didn’t launch a parent version of the SPLC’s notorious “Hate Map.”

For the SPLC uninitiated, the Family Research Council was attacked in 2012 by a man named Floyd Lee Corkins who used SPLC’s notorious “Hate Map” as a hit list. Corkins went to their headquarters in Washington, D.C. with a gun and a bag of Chick-Fil-A sandwiches with the intent of murdering everyone inside and leaving a sandwich on each of the bodies.

Right here in North Carolina, a church was attacked, set on fire and ‘anti-gay group” was spray-painted on the sidewalk. The pastor of the church told WCNC that he believed that the person or persons who did it confused their church with the  “Providence Road Baptist Church in nearby Maiden, N.C., which is listed on the Southern Poverty Law Center’s so-called hate map.”

Given the way SPLC/Teaching Tolerance campaign in various ways to silence organizations, individuals and parents who do not conform with or fit into their radical world view, one might consider SPLC to be the Father and Mother of Cancel Culture.

Children deserve an education, not an indoctrination.

This page has been created to track articles on this website about Teaching Tolerance and to offer parents a “free resource” to combat them with.

An excellent place to start is the Family Research Council’s meticulously documented report: The SPLC’s Teaching Tolerance: What Parents, Teachers, and Administrators Need to Know. Download their full report.

Another good site to find information about the flood of radical ideological materials and teaching in classrooms across the United States is “What Are they Learning.”  This site allows parents and the public to report incidents at the state and district level, which in turn has created a searchable repository.

Parents should also check out the grassroots parent organization that is fighting back against Wokeism and BLM-style indoctrination called No Left Turn.

“From The 1619 Project, to Critical Race Theory, to Comprehensive Sexuality Education (CSE), the goal is to overturn our society by sowing divisiveness and hate,” reads No Left Turn’s mission and goals page. “The social unrest in the wake of the death of George Floyd in May 2020 provided the perfect cover for complete assault and takeover of the educational system. Aided by the mainstream media, many educators and administrators have become the true schoolyard bullies, using taxpayer funds to brainwash the children who are their captive audience.”

Teaching Tolerance Is An Oxymoron 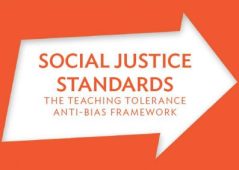 One set of “free” Teaching Tolerance resources that are 100% straight-up progressive indoctrination is the “Social Justice Standards.”

The stated point of these standards is to create social justice activists out of school children starting in Kindergarten. These “standards” are based on “Louise Derman-Sparks’ four goals for anti-bias education in early childhood.”

Derman- Sparks is a known socialist who has supported domestic terrorist Bill Ayers and worked closely with the late Dorothy Ray Healey, a major player in the California Communist Party USA. Healey went on to join the New American Movement and Democratic Socialists of America.

The social justice standards aren’t just polluting classrooms, they have made their way into churches as well. Several years ago, the Unitarian Universalists, the progressive activist church of choice of Reverend Barber and Moral Monday, folded the standards into their “faith development.”

Some Backstory &  The Use Of Presentism

Parents have sent me copies of lessons given in to their children in classrooms around the country and from here in my home state of North Carolina.  Some of them were more egregiously anti-American or propagandistic than others, but all of them carried a theme of inserting just enough facts to look like a respectable resource.

What’s worse is that these “resources” and “lessons” begin in K-5 and attempt to delve into topics that are way over the heads of elementary school children who have no knowledge base to draw from for comparison.  Complex lessons are been boiled down to a slanted and view with a distinct modern social justice theme. These lessons are delivered using the authority and respect the teacher commands to instill in the kids that what she is telling them is a fact.

The application of modern morality and/or social and racial justice narratives in a shaming manner to historical figures and events is purposefully intellectually lazy and is void of engaging in true academic inquiry. This is a staple tactic of the activists today and the long-term theme of Teaching Tolerance materials.

The delivery of their history and literary materials relies on the concept of philosophical presentism.

They are teaching modern leftist activism using a combination of moderately accurate information on a topic, mixed with biased language and assumptions. The given subject is then couched in oversimplified narratives that fit into the SPLC and Teaching Tolerance’s progressive worldview.

One can look at Teaching Tolerance’s “hard history” of slavery aimed at K-2 and 3-5 students and see that that Teaching Tolerance attempting to make children feel a certain way about past events based on a progressive world view of today. Not only is this teaching inaccurate and incomplete history, but it’s also teaching bad history.

And it’s getting worse.

As noted in a Nov. 24, 2020, Real Clear Investigations article, the “wokeism” peddled in classrooms has been kicked up a notch since the death of George Floyd.

Districts across the country are also seeing an influx of revisionist, false, and anti-American propaganda from the Zinn Ed Project, named after the late Howard Zinn.  North Carolina is no exception to this invasion and Zinn’s teachings are actively being woven into the state curriculum.

Zinn was a radical nut obsessed with Marxism and who had a deep hatred of the United States. He was also under FBI investigation from 1949 through 1974.  He died in Jan. of 2010 and is best known for writing the historically inaccurate and highly criticized A People’s History of the United States.

Zinn and his book have been given a thorough debunking by historian Mary Grabar in her book Debunking Howard Zinn. Grabar has pointed out that Zinn appears to plagiarize a number of passages from fellow radicals Gary Nash and Hans Koning.

How Teaching Tolerance Is Taking Over NC’s Largest School District

During 2018 and 2019, the Wake County Public Schools’ Office of Equity Affairs began openly promoting these SPLC-tied “Social Justice Standards” on social media, in classrooms around the district and in Spring 2019 began offering official professional development training for them.

The Office of Equity Affairs (OEA) is the epicenter of the proliferation of Teaching Tolerance activities and materials in Wake County Public Schools.

Read their latest “Equity Call to Action” document which outlines how they will impart their Teaching Tolerance-inspired ‘framework’ and “Essential Learnings” on “all students in every school, every classroom, every day.” 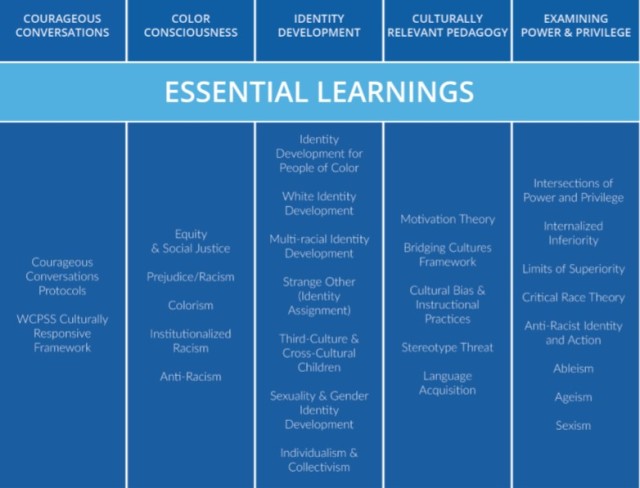 The Huge Price Tag of the OEA

As of the Summer of 2019, the OEA was costing taxpayers over $1 million dollars a year per records obtained by this website. But this was only part of the picture.

The overall spending on and by this department was much larger than this. Records received in late 2019 put the cost of this department at over $2.4 million since 2015. A look at the spending by the OEA in late 2021 upped that figure to $8.69 million.

In an attempt to determine how the OEA was being given such large amounts of money, Wake County Schools was asked for the means by which the district was using to gauge the performance and allot monies to the OEA. The response was that there was no such metric and that only individual performances were assessed.

OEA Staff information as of May 2022:

2. Lauryn Mascarenaz – “Director of Equity Affairs for Coaching and Leadership.” Salary at the date of hire: $85,000. Current Salary: $86,708.16. She previously worked for SPLC’s Teaching Tolerance and still writes on their blog. Update: Mascarenaz resigned in the fall of 2021 with a final compensation total of $83,309.

5. Dr. Teresa Rangel – “Family and Community Engagement in the Office of Equity Affairs.” Salary at the date of hire: $88,862.40. Current Salary: 2021 salary request did not list Rangel as a member of the OEA.

6. Pam Gales – “Senior Administrator, Equity Affairs.” Gales has been with Wake County Schools since 2014 and was making $78,932.40 a year ($6,577.70 per month). Current Salary: $83,739.
Gales previously was the “WCPSS HUB Program Manager.” HUB stands for “Historically Underutilized Business.” The HUB makes sure that certain “equal access to information and opportunities” go to minority and/or woman-owned businesses.