The NC Media was nowhere to be found. In fact, a Google search shows zero stories from any news outlet in the state save one – an LGBT specific one called Qnotes.

The lack of news coverage is troubling, given that on December 13th, the Charlotte LGBT Chamber’s Facebook page excitedly announced the Governor had accepted their invitation.

Nothing was mentioned about the event on Governor Cooper’s official or campaign-related social media. Nothing was found about it on the governor’s website.

The Charlotte LBGT Chamber of Commerce’s Annual Meeting and Gala was held on December 18th at the Westin Hotel.

Multiple photos taken at the event show that Governor Cooper was in attendance.

In the group photo posted to the organization’s Facebook page, Cooper and Charlotte Mayor Vi Lyles are acknowledged as “special guests.” 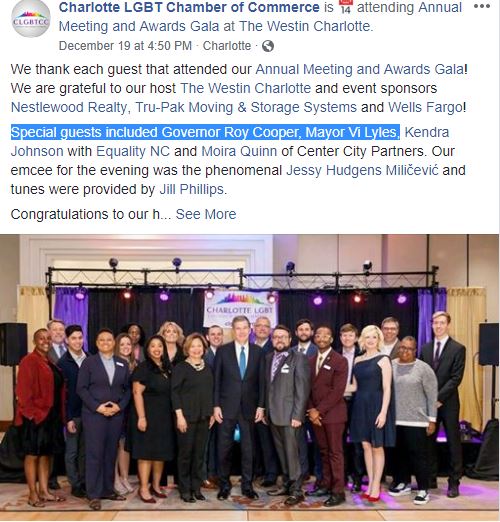 Governor Cooper is flanked on this right by Chad Turner, who hosted the gala and who is the LGBT Chamber’s acting Board President.

Chad Sevearance is a registered sex offender and was the leader of the transgender bathroom push in Charlotte two years ago.

Sevearance was convicted of lewd conduct with a child under the age of 16 in 2000 and he was required to register as a sex offender for a minimum of 10 years.

The incident occurred in South Carolina in 1998. Sevearance was 20 and the victim was 15.

Sevearance was a visible figure in the controversy surrounding Charlotte’s illegal ordinance making all bathrooms and shower facilities in the city limit ‘gender-neutral’, meaning anyone can use any facility they wanted.

Then-Attorney General Roy Cooper used HB2 as a campaign wedge issue and was apparently actively involved in the subsequent economic blackmail by a coordinated group of progressive and activist business leaders.

Roy Cooper talks to a group at the CLT LGBT Chamber of Commerce event. Convicted sex offender and host, Chad Sevearance, smiles in the background.
Click for original Image via Facebook.

House Bill 2 blocked the illegal Charlotte Ordinance and the firestorm began. That firestorm included false reporting, under-reporting, and in the case of the Charlotte Observer – not reporting at all.

A reporter for The Charlotte Observer also admitted to Breitbart News that the man they “frequently quote is the same man who was convicted for sexual assault of a minor in 2000.”

The Charlotte Observer knew Sevearance was a convicted sex offender, yet omitted that fact from their reporting for years.  The outlet was finally forced to report on it in March of 2016.

Given that the Mayor of Charlotte and the Governor were there as “special guests,” I searched the Charlotte Observer for news of the event. I found zero stories. But that could be because there is nothing about it on the Charlotte LGBT Chamber’s website.

The meeting and gala announcement appears to have omitted Cooper and Mayor Lyles names, otherwise, Qnotes would have included such high-profile names in their reporting.

I did find a story about the LGBT Chamber’s 2018 honored Corporate Partner, Wells Fargo. The company will be paying $575 million to settle “state investigations” into the company.

Wells Fargo was one of several companies the Human Rights Campaign and Equality NC employed to trash North Carolina over HB2 being ‘discriminatory’ while omitting any information about the Charlotte Ordinance.

Wells Fargo has made statements that their company is ‘all inclusive’, ‘tolerant’, ‘diverse’ and does not discriminate.

The company also is a major sponsor of Charlotte’s Gay Pride parade, which in 2017 was intolerant and discriminated against Gays for Trump by blocking them from participating.

Funnily enough, The Charlotte Observer reported on that story, but this time omitted Wells Fargo’s involvement.

A.P. Dillon is a reporter currently writing at The North State Journal. She resides in the Triangle area of North Carolina. Find her on Twitter: @APDillon_ Tips: APDillon@Protonmail.com
View all posts by A.P. Dillon →
This entry was posted in A.P. Dillon (LL1885), EXCLUSIVE, POLITICS NC, Roy Cooper and tagged HB2, Roy Cooper. Bookmark the permalink.