Taxpayer-funded social justice warrior propaganda. That is what the largest district in North Carolina has imported.

What am I talking about? The hiring of a Southern Poverty Law Center Social Justice Warrior into Wake County Schools.

Wait? What?@WCPSS, the largest district in NC and the 15th largest nationwide, extended a job for "Director of Equity Affairs" to someone from #SPLC which is the far left, biased hate group that pretends to track hate groups?#ncpol #nced #wcpss https://t.co/mdP4snVr0o

Do we really want this kind of divisive identity politics in our classrooms?

This district has bemoaned they need MOAR money year after year, but they have the money to hire two women to indoctrinate our kids?

Is it any wonder school choice is booming, especially in Wake County?

Parents of Wake County, ENOUGH IS ENOUGH.  Is it time to protest yet?

The “Office of Diversity Affairs” in Wake County Public Schools has hired Lauryn Mascarenaz to be the “director of equity affairs for coaching & leadership.”

Mascarenaz doesn’t appear to be a North Carolinian either, much less a Wake County resident. Her location on Twitter puts her in Alabama.

Her idea of a great lesson? Teaching kids that Cesar Chavez was a heroic social justice warrior and not a man whose mentor was a Saul Alinsky disciple and definitely not a man who treated his volunteers like dirt and regularly referred to farmworkers as “pigs.”

What does Mascarenaz think about white folks?
Well, they need to check their privilege. Even at the NY Times. 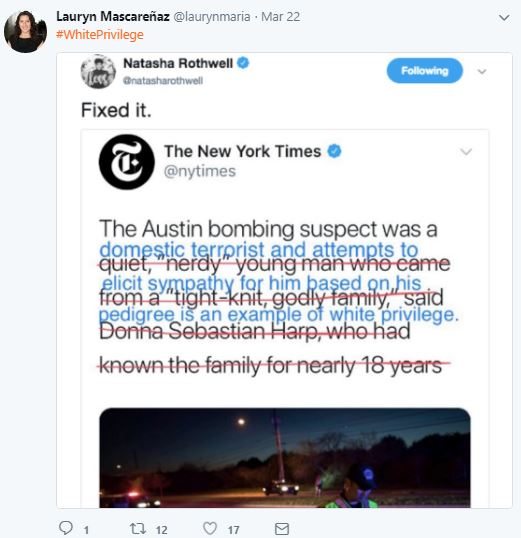 Not alarmed enough yet?  Let’s look at Teaching Tolerance, where Mascarenaz hails from.

Her bio over there reads:

Lauryn has 10 years’ experience as an elementary classroom teacher, literacy instructional coach and culturally responsive trainer. She holds a bachelor’s degree in American Studies and a master’s of education degree in culturally responsive teaching, both from the University of Colorado. Lauryn has a passion for educating teachers on engagement strategies and is particularly interested in closing the opportunity gap for young males of color.

What it doesn’t say is closing that gap by demonizing all other young males, their parents and whoever else fits into the white guilt/ white privilege narrative.

Go read her articles while they are still up.  One you should not miss is “Teaching the Inauguration” in which she promotes the anti-semitic and radical Women’s March.

I’ve written in detail about Teaching Tolerance and their goal of turning school kids as young as 5 years old into little social justice warrior activists.

I’ve also written about how social justice mess is crowding out actual academics in our schools – using our own tax dollars.

But Wait, There’s Not One, but TWO Social Justice Warrriors On Deck

In addition to hiring an SPLC hack, the “Office of Diversity Affairs” has also hired a white guilt ridden teacher out of Durham.

Project READY refused to comment when asked about their materials. Instead, they shoved responsibility for responding to the WCPSS communications department.

Read about Project READY here and pay attention to their use and interest in using Social Emotional Learning (SEL).

Everything in this woman’s Twitter timeline is about social justice, specifically race.
Math? Science? Reading? Nah.

Here is a full view of the poster above.

Her Twitter timeline is also littered with white guilt themes and Black Lives Matters narratives, but she doesn’t “represent all white people.”

Teresa really loves our President.  This screen grab is just one the of dozens of similar tweets.

Parents, it’s time to punch back twice as hard

Folks can read about Wake County’s latest taxpayer-funded social justice infusion in the Twitter moment below.  Then, ask yourselves, just how much more of this crap are we going to take? And on OUR DIME. Maybe it’s high time that parents showed up to the next school board meeting?

A.P. Dillon is a reporter currently writing at The North State Journal. She resides in the Triangle area of North Carolina. Find her on Twitter: @APDillon_ Tips: APDillon@Protonmail.com
View all posts by A.P. Dillon →
This entry was posted in EDUCATION, Racial Justice, Social Justice, Wake County School Board, YWBMTC and tagged SPLC, Teaching Tolerance, WCPSS. Bookmark the permalink.