Did you know that the Wake County schools Office of Equity Affairs recently gave presentations to both the Wake school board and the NC State Board of Education? The presentation included an explanation of how they will “leverage student voices” to advance their “Equity Framework” in “schools and classrooms.”

The presentation to the State Board of Education occurred on June 5th. Audio of  OEA’s presentation begins at the 1:41:39 mark or close to it.

I have not had the time to transcribe the full set of remarks, but as a parent, I found the premise and direction of this presentation disturbing. It bears mentioning that the thrust of the presentation includes an emphasis on an “Equity Framework.'”

The overarching theme of the “Equity Framework” is the OEA’s focus on training teachers to have an “action-oriented mindset” which will move social and racial justice themes through their students and classrooms.

Teachers are supposed to see “inequities wherever they are,” according to remarks made by Rodney Trice, Director of the OEA.  Trice went on to say we need to make sure these inequities are “disrupted wherever we see them,” and that the goal was to “see, understand, interrupt.”

At no time was ‘equity’ or ‘inequity’ defined during the presentation. In fact, what the OEA team meant by ‘disrupt’ or ‘interrupt’ was never defined or explained either. 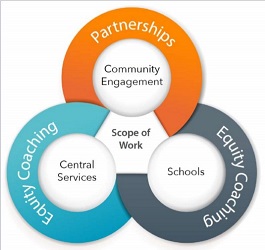 The Office of Equity Affairs’ (OEA) “Equity Framework” appears to be patterned directly after the “Anti-Bias Framework” created by Teaching Tolerance, an offshoot of the left-leaning Southern Poverty Law Center.

The framework began and seems to hinge on the training of all Wake County schools staff in five areas:

The first item on the list is Courageous Conversations. This is a seminar developed by a man named Glenn Singleton who runs an outfit called the Pacific Education Group (PEG).

Singleton’s Pacific Education Group is the same outfit which is providing ‘implicit bias’ training for NYC Schools and is at the center of charges of a “toxic” workplace complaints and claims of a “white purge” currently being leveled at NYC Schools Chancellor Richard Carranza.

In controversial “implicit bias” training, New York City’s public-school educators have been told to focus on black children over white ones — and one Jewish superintendent who described her family’s Holocaust tragedies was scolded and humiliated, according to firsthand accounts.

A consultant hired by the city Department of Education told administrators at a workshop that “racial equity” means favoring black children regardless of their socio-economic status, sources said.

The NY Post has chronicled the allegations, including that the NY Dept. of Education has a contract with Singleton for “$775,000 in services,” and reports that $582,603 of that amount has been to date. 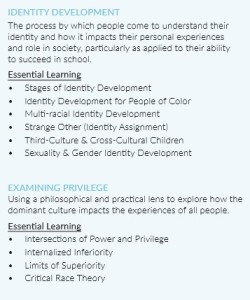 Singleton’s ‘Courageous Conversations’ and ‘Beyond Diversity’ training sessions have been used by the OEA across Wake County Public Schools for over 4 years and have cost taxpayers hundreds of thousands of dollars – $261, 790 to be exact.

That $261k is just a drop in the bucket. Singleton has been peddling these programs for decades and districts nationwide have paid him millions.

For an eye-opening trip down Glenn Singleton’s cash cow memory lane, visit Hans Bader’s 2007 article titled “Embarrass Your Employer, While Getting Rich Off of “Diversity” Scams.”

Included Bader’s article is a scathing and brutally honest analysis of Singleton and the biased ideas his programs put forth:

“Singleton promotes the basest racial stereotypes, such as claiming that “’white talk’ is ‘verbal, impersonal, intellectual’ and ‘task-oriented,’ while ‘color commentary’ is ‘nonverbal, personal, emotional’ and ‘process-oriented.’” He also blathers about “the ubiquity of white privilege and racism,” and depicts Asian students as being “majority students” just like whites because they have the temerity to succeed academically in a predominantly white society. But although he views minority culture as not being “intellectual” and “task-oriented,” it is white teachers whom he blames for the underperformance of many minority students, since he claims it would be a “racist statement” to place any responsibility for minority underperformance on minorities themselves.”

Wake County is hardly the first to use Singleton’s programs, New Hanover schools used it in 2015.

In addition to Singleton’s race-based training, Wake County Public Schools also paid out over $48,000 to a similar group based in Greensboro, North Carolina called the Racial Equity Institute.

The OEA’s presentation to the State Board and to the Wake School Board is an ‘after the fact’ event. The ‘advancement’ of “leveraging student voices” in schools and classrooms has already begun.

OEA’s presentation document states that educators will be the instruments for the infusion of raced-based and social justice training into “schools and classrooms.”

“Educators will work to socialize intelligence and effort among all students in every school, every classroom, every day.”

“Educators will be intentional about interrupting beliefs and practices that serve as barriers to student achievement.”

“Leaders will model and advance courageous conversations about special education status, family income, and race, and how these attributes shape teaching and learning experiences in schools and classrooms.”

As previously reported, the OEA also means for schools and classrooms to start using the Southern Poverty Law Center’s “Social Justice Standards.”  Training of teachers in the district on these standards – and I used that term very loosely –  has already begun.

During 2019, Wake County was offering courses they categorized as ‘professional development’ like “Creating Engaging and Equitable Classrooms” and “Seeing White” where  teachers take a “deep dive into questions about whiteness and its political, economic, and social constructions.”

View the full list of the “equity” training offered.

The Cost Of “The Office of Equity Affairs”

I recently had written that the OEA was costing Wake County taxpayers $742,441 a year, and mused that at this rate, the department would be over $1 million soon.

Sooner than expected, I found out how right I was.

Wake County’s School Board has been unable to live within a budget that’s been over a billion dollars for years. Million dollar departments like the Office of Diversity Affairs are part of why. So is paying over a million for MVP Math, which is spectacularly failing students.

Point of interest on the above graphic –   I had to do a records request to get it as I was unable to locate the budget for the OEA in any published Wake Schools annual budget. This begs the question, where else is the board spending the taxpayer’s money that has been hidden from view?

Update 2021: I was able to obtain a running total of budget expenditures made by the OEA since its inception in 2015. As of the 2019-2020 school year, this department has cost Wake County taxpayers nearly $6 million dollars. See below.

It has been my experience that the term ‘equity’ is an ever moving goalpost that is often used interchangeably with ‘equality’. Organizations and activists, like the Office of Equity Affairs, use this type of terminology to not bring equity in opportunities but instead to force equity in outcomes.

Inclusion often follows equity in the buzzword list, but that word has lost all meaning. In fact, inclusion always seems to become exclusion.

Diversity and inclusion are often paired together creating a combination where students are first boiled down by sex, race, ethnicity, sexual orientation, and beliefs sets and are then turned into identity-based quotas and data sets used to maintain the facade of a state of equity.

Inclusion, equity, diversity — all noble concepts, but which have been perverted into endless ways to create silos of victim classes to divide people instead of uniting them.  Instead of improving teaching skills and subject instruction, concepts like the “Equity Framework” seek to level the academic playing field through a junior version of identity politics. And there’s nothing ‘equitable’ about that.

A.P. Dillon is a reporter currently writing at The North State Journal. She resides in the Triangle area of North Carolina. Find her on Twitter: @APDillon_ Tips: APDillon@Protonmail.com
View all posts by A.P. Dillon →
This entry was posted in A.P. Dillon (LL1885), EDUCATION, EXCLUSIVE, NC Board Of Education, Parental Rights, Racial Justice, Social Justice, Wake County School Board and tagged OEA, Office of Equity Affairs, WCPSS. Bookmark the permalink.