Yesterday, I noted that Al Jazeera had taken interest in the arrests of eight young people after a water balloon fight occurred at Enloe High School in Wake county. In the end, that article circled back to discuss that perhaps this would tie in to the racial discipline quota the Department of Justice was proposing as reported by The Daily Caller.  I somehow missed the text of the complaint filed by the DOJ on Wednesday. It is an example of what the Daily Caller reported.

A complaint filed Wednesday against the Wake County Public School System alleges “a pattern of discrimination and unlawful criminalization” in Wake Schools.

North Carolina’s Advocates for Children’s Services filed the complaint with the U.S. Department of Justice against the Wake County Sheriff’s Department, eight police departments in Wake County and the WCPSS, alleging violations under the U.S. Constitution.

Wake County Sheriff Donnie Harrison said he is unaware of the complaint and therefore could not comment.

A spokeswoman for WCPSS said the system is reviewing the complaint.

“The Wake County Public School System’s over-reliance on unregulated school policing practices, often in response to minor infractions of school rules, results in the routine violation of students’ education al and constitutional rights,” the complaint says. “Specifically, evidence suggests that the rights of students with disabilities and African- American students in the Wake County Public School System are routinely violated.”

The complaint from 2010 is here. Read Coalition complaint letter that followed.

So this isn’t just a memo from the DOJ, it’s actually being put into practice. There is a zeroing in on School Resource Officers in the introduction. Something to keep an eye on.

More About The DOJ Complaint

The article continues on and recounts moments where unnecessary or excessive force has been used on students in Wake county. It also reveals the point of the complaint, which lines up directly with the DOJ’s intent to start suing schools — only they won’t sue the school system all by itself, that would look monstrous. They will sue the sheriff’s departments too.  WNCN, with emphasis added:

The complaint points out that North Carolina is the only state that treats all 16- and 17-year-olds as adults when charged with criminal offenses, and then offers no opportunity to return to the juvenile justice system.

“The line between school discipline matters and criminal matters is often blurred in Wake County, with WCPSS staff and law enforcement officers routinely collaborating in the perpetuation of a school-to-prison pipeline, whereby students are pushed out of school and into the juvenile and criminal systems at alarming rates,” the complaint says.

“While schools may be justified in permitting law enforcement involvement in response to the most serious and unlawful student misbehaviors, the overwhelming majority of the referrals to court for school-based behavior in Wake County have been triggered by minor student misbehavior.”

Zero tolerance is seemingly a target in the complaint. I’m in favor of dropping a lot of that type of thing. We’ve all seen the idiotic results like suspensions of 6-year-olds for pastries eaten into the shape of a gun, however, in some of the rougher schools beyond primary grades, that would be like dropping the only line of defense.  Holder is quoted in the bottom of the article actually referring to zero-tolerance policies as the reason problems from schools get injected into the criminal justice system. WNCN again:

“A routine school disciplinary infraction should land a student in the principal’s office, not in a police precinct,” Holder said.

Are there instances of this type of thing going on in Wake county? Probably. But why specifically Wake county? Why not Charlotte Mecklenberg, the other large district in North Carolina? For that matter, why North Carolina. Is this happening in specific counties in other states?

Warning, from here down the story starts peeling like an onion with more layers than I care to count.

What groups are involved in bringing this to Wake county specifically? Well, the NC NAACP, specifically the Raleigh chapter, is one. The complaint lists dozens of others. One group highlighted by news reports was NC HEAT. NC HEAT held a press conference outside the Wake County Superintendent’s open forum in Wendell last night, which is how I came across them. These forums were not well-publicized and residents are not used to them, yet this group came out and held a presser. Honestly, I can’t remember the last time an open forum like this was held in Wake County. Anyway,  you can see a video of the NC HEAT here. Too bad Reverend Barber couldn’t attend, seeing as he is listed by name in the complaint.

Who or What is NC HEAT?

The HEAT stands for “Heroes Emerging Among Teens”.

NC HEAT making waves to stop the School-To-Prison-Pipeline as a plaintiff in a Federal legal complaint launched by… http://t.co/GdQ2dZfRSk

Fun Fact: The background to their Twitter page is the big Wisconsin Solidarity Fist that was used by the unions during their protests in Madison.

They have a Facebook presence as well. Their cover picture was an eye-opener:

Yes, they are wearing prison-like orange jumpsuits and shouting through a bullhorn.

The website for NC HEAT hangs off of a WordPress site called “Wake Youth“.

Blazing across the top, is the header,  “Youth Organizing Institute” with a sub-header of “STOP RACISM & SCHOOL RE-SEGREGATION, CHALLENGE THE SCHOOL TO PRISON PIPELINE, AND MAKE SCHOOLS SAFE FOR LBGTQ YOUTH”.

Sounds like a students’ rights group focused on discipline and zero-tolerance right? Not exactly.

NC HEAT apparently is affiliated with the Youth Organizing Institute (YOI). The YOI is listed in the complaint that was filed. Specifically, Qasima Wideman is listed at the bottom of page 68.

The YOI has its own anonymously registered WordPress site, but the address is EmpowerYouth.Org. That matches up with the email address for Wideman in the complaint.

On the About Us page, it describes what the “Youth Organizing Institute” is and it amounts to a protester training camp for kids.  Here is the ‘training’ they say they offer:

A version of Organize the South Or Die … for kids. How nice.

YOI has an annual report.  Read it.  On page 11, they get into detail about how YOI and NC HEAT participated in Moral Monday, complete with a picture of some of them with Reverend Barber. This quote from page 11 made me shake my head:

“McCrory, you’d better watch out, because today we are all raising our hands- and we want to know why Wake County can spend so much money on untrained security guards, but can’t hire even half the recommended number of counselors per  school,” said Markyona on the Witness Wednesday held to mark the 50th anniversary of the bombing of the 16th Street  Baptist that left four young girls dead.

First, the governor has nothing to do with security guards in schools or counselors. That doesn’t matter though, because this is from the Blueprint NC cripple/eviscerate script. It’s not about fixing what might be wrong, it’s about beating Republicans and the Governor over the head every chance they get.

You can see the who’s who of the Left in NC that gave money to YOI on page 13 of their annual report. The last one on the list is Blueprint NC’s major funder, the Z. Smith Reynolds Foundation.

By the way, some of the parties that filed the complaint against WCPSS are also donors to YOI. YOI says it is a 501(c)3 under ACRe, which as of the writing of this article, was listed as “exempt expired” and other documents showed they were on hold for renewed exemption status by the NC Secretary of State. If you hit their filing details, you’ll see they’ve brought in over 100k in grants in 2013.

The Youth Organizing Institute is a project of Action for Community in Raleigh (ACRe), a registered 501c(3) organization

Just to review:  NC HEAT is tied to YOI which is tied to ACRe. Got that? The money river flowing behind the scenes here is meant to be hard to follow. The ACRe Board:

Hit the next page of the annual report and you’ll find Blueprint NC staffer, Erin Byrd, being honored at a YOI gala.

This Moral Monday/Blueprint NC activity ties in with their “Recent Accomplishments” on the YOI website. Three of them stand out:

Gee, look at that.

These groups are less about discipline issues in schools and more about training kids to do the will of the Left in NC. The Pope boycott was the NC NAACP’s doing. Is YOI funding the activities of NC HEAT? YOI says it’s a 501(c)3 too.

There is a picture that was embedded in the list above under the first item, it shows kids involved in a FLOC rally. For those of you who don’t know what FLOC is, it stands for Farm Labor Organizing Committee.  It’s the AFL-CIO’s farm organizing arm. Here it is blown up: 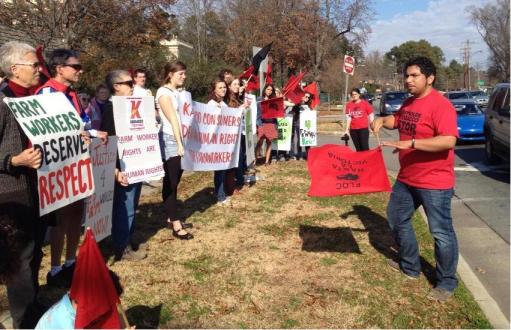 There are some familiar faces in the YOI/ NC HEAT crowd. Flashback to October 2013 and the News and Observer Story, Groups to march to Central Prison to protest Wake County school discipline policies.  There was a press release in the story, look who the contact name is:

Youth March in Raleigh to End The School-To-Prison-Pipeline

WHAT: Youth-led march with great visuals and dynamic youth and parent speakers as a part of a National Week of Action to Stop School Push Out

WHERE: The march begins at Washington GT Elementary School (1000 Fayetteville St, Raleigh, NC ‎27601) and ends at Central Prison (1300 Western Blvd) with a stop at the SNCC plague by Shaw University

In regards to this article he is Development and Communications Director for YOI and listed as “Development Director” for ACRe on the 2013 financial info filings at the NC Secretary of state. He’s also found in an attachment that lists ACRe’s board of directors.

We know that name from other places.

The Bryan Perlmutter who was arrested as a member of the NC Student Power Union and is part of the NC Vote Defenders (who still won’t reveal what 501 is giving them money) and involved in the Fast Food strikes being organized by the AFL-CIO in North Carolina. Strikes which were also supported by the Reverend Barber himself and of which Perlmutter attended. Hit the bottom of this article and read about Mr. Perlmutter’s activities I’ve just mentioned.

Flashback to Perlmutter’s May Day Arrest:

*As of Sept. 2017, NC Student Power Union has removed ONLY Perlmutter’s video describing his arrest. Four other similar videos are still on YouTube.