A line was crossed tonight in Holly Springs, NC by the North Carolina Association of Educators (NCAE). A flyer for a planned Teacher “Walk In” was distributed to kids at Holly Ridge Elementary school in their ‘take-home folders’ today.  This “Walk In” has been talked about in the media a bit but nothing hit as close to home as this did.  This flyer had no business being ferried home by our children. Keep reading to see why. 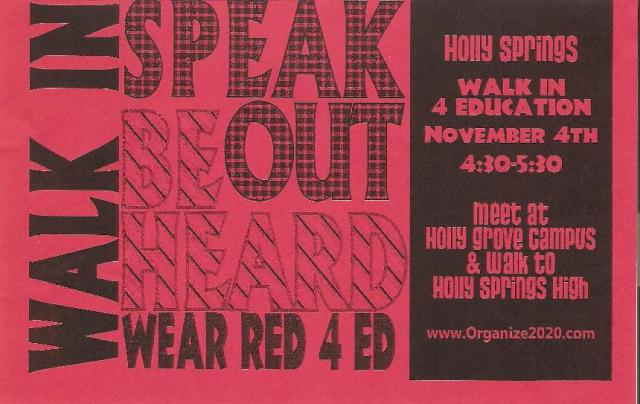 I have no idea how or where it was produced, but I do know it appears to have been given out school wide. If this was done on the tax payer dime at this school, clearly some explaining needs to be done. I am willing assume that some teachers probably didn’t realize what they were distributing. It may likely be that some teachers or teacher assistants collated it with a slew of other materials to send home and didn’t really look at it. In any event, the principal has been contacted and asked about this, but no response yet. I will update when I get one.

This is a site affiliated with the NCAE. It is almost purely politics, shows shots of teachers protesting at Moral Monday and takes nasty aim at the Governor and the NC General Assembly in its banner messages like this one:

North Carolina lawmakers are showing reckless disregard for public education, teachers, and the youth of our state. Join with us to support NC education & the democratic process.

Now go read the mission statement, which ends with this paragraph detailing the point of Organize 2020 — to bring unions into our schools.:

As teachers, we need to be treated as professionals: with the respect and compensation commensurate to the critical role that we play in our communities. We need to have the confidence to be a powerful voice in the decisions that are made about our schools, curricula, and practice. We need professional support and access to opportunities for growth as professionals. We need time to plan lessons, assess and give feedback on student work, and build relationships with our students, coworkers, and community members without sacrificing our health and relationships. We need hope. We need a union.

Seriously?
This is pure political organizing using our children. It’s the NCAE using our kids to drive their own agenda. This isn’t about kids or education, this is about unionizing. This is a political agenda being toted home literally on the backs of our kids. It’s appalling.

If you think that this might be being blown out of proportion,  consider this email sent by a teacher at Holly Ridge Elementary during a Teacher Work Day yesterday. Not only is controversy stirring Wake school board member Susan Evans involved, but apparently a “mayoral candidate”? Try and tell me this isn’t political.

Fraley isn’t the only one pushing this at Holly Ridge.  WRAL has Bambi Lockhart on record:

“What we want is real positive change,” Bambi Lockhart, a teacher at Holly Ridge Elementary School, said. “The kind of change that will lead to student growth and global education. That will bring the best and brightest back to our state and our schools. And that will help stop the war on North Carolina public schools.”

Note the CC: on the email to Paulette Leaven, the President of the Wake NCAE. Leaven is remembered for her thoughts on how segregation would come back if we didn’t bus for socioeconomic reasons in Wake County. Funny how that hasn’t happened and how much she sounded like Reverend Barber.

I certainly hope Leaven is on hand for this event like the email says, because I will be there to ask the question of WHY this blatant piece of political propaganda was sent home with our kids. I’d also like to ask why I should even consider supporting them when they are aligning themselves with the likes of Reverend Barber and vitriolic mess that is Moral Monday.

Hey, while you’re now looking at the Organize2020 site, be sure you don’t miss their Tumblr account that tells us “What Our State Needs”. No, not political at all there. The lack of self-awareness from the first item to the third and fourth ones is staggering.

“We are a member led group of the NCAE doing grassroots organizing for public education.”

And because.. well, Education is SOCIAL JUSTICE…or something?

10:22 AM 10/30/13: Pete Kaliner is reporting that Guilford Cty Superintendent sent a similarly worded email specifically talking about the Walk In to staff.
Also, if parents reading this have kids that received this flyer at Holly Ridge, the principal is Joy Gorman and her email is jgorman@wcpss.net
State wide education contact information here.

* Update – I have a screen shot of an email sent out by Nora Carr of Guildford County Schools that is promoting the Walk In.

11:27 AM 10/30/13:  Guilford county schools promoted this event on their official Twitter account. Iredell-Statesville has also promoted it through official channels:

Wake County Schools are redirecting parents upset by this to their ‘official grievance’ process. Should I send this back in my kid’s back pack?:

@MichelleDouglas We are not lawyers – but we can offer advice. Talk to your school’s principal.

11:40 AM 10/30/13: Located a Twitter account called @TeacherWalkOut which points to a site called TeacherWalkOut.com. That site redirects you to here: http://ncteacherwalkout.weebly.com. There is a page with a list of the schools supporting this event. Look and see if your child’s is on the list.

Events in the Wake county area include:

1:45 PM 10/30/13: So far, not a single representative, superintendent, principal or official of any kind has contact me back on this. I don’t know which is the bigger shameful bit, using our kids to bring this home or the silence when questions are asked about it. *Note: The Principal of Holly Ridge has replied. When I have a copy I will update again. UPDATE: I have been sent a copy of the reply from Principal Gorman (below). I applaud her taking control and stepping up to act. 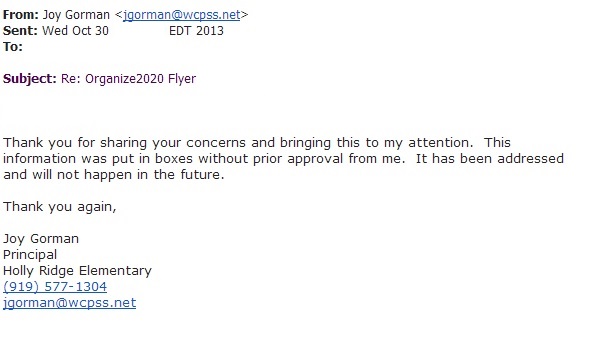 Terry Stoops at John Locke has observations about ideas for activities at these Walk Ins that include ice cream for the kids and Tibetan style flags.

I’ve also been informed that the Lacy Elementary event will be between 8 and 9 am. Right before school begins – I assume it is happened at the school? Parents dropping off their kids or that have kids in any early care activities will likely be able to witness this if that is the case.

2:34 PM 10/30/13: A reader has sent me emails from Lacy Elementary coordinating the Walk In event at their school. They actually wanted volunteers to assist because they are planning to meet while IN school, with the event broadcast on television??

The second email alters the request for volunteers after complaints were made but the event appears to still be planned to go on:

3:10 PM 10/30/13: Senator Berger and Senator Hunt have released a statement on the upcoming Walk In Protest.

Raleigh, N.C. – At least one North Carolina elementary school is soliciting volunteers over the internet to watch students while teachers walk out of their classrooms to participate in a politically-motivated one-hour strike next week.

And the North Carolina affiliate of the national teachers’ union has stated on record they  “affirm the desire, and right, of educators to use tactics like a walk-out or strike” – a clear violation of North Carolina law.

“Schools have a duty to educate and protect our children, not serve as marching grounds for political protests orchestrated by unions. We are deeply disturbed the NCAE is encouraging teachers to turn their backs on their classrooms and leave their students in the care of strangers who may lack formal training and background checks. Things have reached a new low when a teachers’ union is willing to abandon its core responsibility and jeopardize student safety for its own gain.

“As attorney general and our state’s chief law enforcement officer, Roy Cooper has an obligation to protect our children’s safety, and we look forward to his swift response.”

The statement continues to include examples I have just recently posted.

5:30 PM 10/30/13:  I have received a press release from one of the “Mayoral Candidates” mentioned in the Walk In email by Stacey Fraley ( screen grab posted in the original article above).  The statement is as follows:

Vinnie DeBenedetto, a candidate for Holly Springs mayor, today strongly denounced actions taken by certain teachers in Holly Springs schools and called on the Wake County School Board to investigate.

“I am concerned that some children were sent home with what appeared to be political fliers for Monday’s ‘Walk-In’ event,” said DeBenedetto. “Children should not be used as props or political messengers.”

DeBenedetto is one of two candidates for mayor in next week’s election. While the Mayor of Holly Springs does not have jurisdiction over local schools, DeBenedetto says that the mayor has an obligation to ensure schools are learning environments and not used for political purposes.

“I call upon the Wake County School Board and the State Board of Education to look into this matter and see if any rules or laws have been violated. I also call on other candidates to clarify their reactions to these events”.

DeBenedetto had previously served two terms on the Parsippanny-Troy Hills School Board in New Jersey and was an adjunct professor of business. He had accepted an invitation to Monday’s “Walk In”, but withdrew upon learning about the fliers and the political nature of the event.

“I have several friends who are teachers in Holly Springs schools and I used to be a school board member and a teacher myself. I accepted an invitation to this event with the understanding that it was an opportunity to talk with teachers and learn about what I could do as mayor to help them. But when I learned that this was a political event and that children were being used to promote it, I promptly withdrew.

“I want to communicate with all concerned citizens in Holly Springs, especially teachers. As mayor, my door will always be open to anyone who wishes to talk. But I won’t participate in a partisan event that misuses children as political messengers.”

Current Mayor Dick Sears, who is running for re-election, has confirmed that he was also asked to participate. I have not received a formal statement from him yet. If I do, I will post that one as well.

It is also worth noting that the NCAE has taken down the Walk In page on their site. If this is an attempt to distance themselves, they are too late. I have the text saved.  The tweet that originally came from the NCAE promoting it contains a link that leads to an empty page now.  The Walk in Toolkit is also gone. I retweeted the link in question:

When you click the link to the ‘Walk In’ tweeted by @NCAE, it goes to a blank page now? https://t.co/cWlCjqPKTO @NCPlottHound

THANK YOU to Carolina Plott Hound for linking.

THANK YOU to Pete Kaliner at WWNC News Radio 570 for linking.

THANK YOU to Civitas for linking.

THANK YOU to Doug Ross for linking.