Have you signed up for our workshop on @Tolerance_org Social Justice Standards?
Join @laurynmaria and the OEA team on May 4th for this incredible learning opportunity!
Eschools -> SRN#19170052#Equity4Wake pic.twitter.com/nHCrAWRNa5

Who is Teaching Tolerance? They are the ‘education’ arm of the now embattled hate group tracking hate group, the Southern Poverty Law Center (SPLC).

What do they do?  Perhaps Jacob Laskin described them the best when he wrote that “the program, far from a good-faith effort to instruct schoolchildren in the merits of tolerance, is designed to spread the virtues of political correctness among pupils while promoting liberal pieties among their teachers.

The materials are a clear distraction away from the teaching of actual academic subjects. For example, just last month, Teaching Tolerance spent time dissuading teachers from using certain books and hindering children from learning to read by recycling the 2017 attacks that Dr. Seuss and his books are racist. 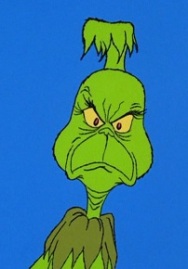 That’s not a joke.

According to Teaching Tolerance, Dr. Seuss has”a history of racial baggage that educators should understand when introducing his writing to their students.”

That quote does not do the article justice, you have to go read the whole thing and see what they are basing this alleged ‘racist baggage’ on and to understand what the point of it all is:  Promotion the political machinations of the National Educators Association (NEA).

Many people likely don’t realize that the NEA sponsors Read Across America Day which reaches over 45 million teachers and impressionable children. That’s a giant platform to push an agenda on.

[Read: SPLC has become what they started out fighting against]

Getting back to the OEA tweet, the “Social justice standards” mentioned are aligned to Common Core and, to be blunt, are indoctrination garbage with zero academic value. The shortest, most accurate description of Teaching Tolerance’s materials comes from Discover the Networks:

“The Teaching Tolerance lesson kits contain reading materials and suggested classroom activities designed to steer K-12 students toward the conclusion that America is an inequitable, racist, and sexist society.”

Teaching Tolerance makes it plain that they designed these standards to train kids to be social justice warriors in a “collective action” army. The standards start with Kindergarten and run through 12th grade.

Links to my entire 5 part series on these standards are found at the end of this article.

Where the Standards Came From

According to the Teaching Tolerance website, these standards are based on, “Louise Derman-Sparks’ four goals for anti-bias education in early childhood.”

Derman-Sparks is a known socialist and has supported domestic terrorist, Bill Ayers. In 2008, Ayers came under media attacks for his associations with then-candidate, Barack Obama. In response, college professors around the country signed a statement of support for Ayers. Sparks, who was of the Faculty Emeritus at Pacific Oaks College, signed that statement.

In addition to supporting domestic terrorists, Sparks worked closely with the late Dorothy Ray Healey, who was a major player in the California Communist Party USA. Healey went on to join the New American Movement and Democratic Socialists of America. Sparks was also a member of the “Socialist Community School” that was started in 1979 and later taken over by the Democratic Socialists of America.

This woman is who Teaching Tolerance is modeling their standards after. Let that sink in a moment and then consider the woman Wake County Public Schools has hired to carry on Derman-Sparks’ work.

Where the Standards are Going: Into Wake County Classrooms

Lauryn Mascarenaz (the woman in the tweet) was hired her last year by WCPSS. It’s no surprise that she’s pushing the Teaching Tolerance Social Justice Standards because she’s a former Southern Poverty Law Center/Teaching Tolerance employee.

Given the rise of antisemitism, it’s alarming to note that Maacarenaz wrote an article called “Teaching the Inauguration” in which she promotes the anti-semitic and radical Women’s March and asks teachers to “discuss how protest and resistance have played pivotal roles in our country’s history.” On the surface, the article looks innocuous but is a well-structured slow build of leftist narratives on religion to racism to voting.

Mascarenaz is currently pulling down $85K a year to belittle teachers about their ‘white privilege, condescend to them about holiday lesson options and promote LGBT ‘safe space kits’. 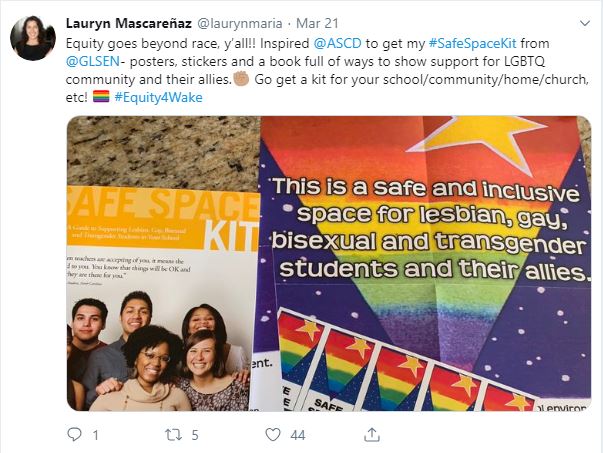 But Mascarenaz is not alone, she’s one member of the staff for the “Office of Equity Affairs” or OEA for short. The main purpose of this office has nothing to do with improving actual academics and everything to do with ‘training teachers’ to be ashamed of their skin color.

I’ve recently learned that there has been an addition to the staff of this office Dr. Maria Rosa Rangel has apparently been added as the “Family and Community Engagement in the Office of Equity Affairs.”

I received information from WCPSS that Dr. Rangel has been with the district since 1996 and is making $7,405.20 per month, which is 88,862.40 a year, not including benefits. The district also sent a job description for Rangel along with the salary information. Part of that description says Rangel is responsible for “planning, developing, and delivering equity professional learning experiences for district employees.”

The addition of Rangel’s salary brings the OEA’s total costs to $663,509 a year.

Remember all of this money as the Wake County School Board complains it cannot work the billion dollar budget it has.

What is the Office of Equity Affairs and Why Does It Exist?

What does this office do? Officially, this is the line:

“We are committed to working to eliminate racial or socioeconomic inequities within our school system by eliminating achievement gaps and disparities in student discipline.”

WCPSS created the OEA to satisfy a complaint filed by the NC NAACP and ‘racial advocacy’ groups over the alleged ‘school to prison pipeline’ and the higher rate of suspension of minority students.

The creation of the OEA is specifically mentioned in the recent agreement between the U.S. Department of Education’s Office for Civil Rights (OCR) and WCPSS. The agreement, in conjunction with discipline policy changes already made, mimics the PROMISE program, which allowed Nikolas Cruz’s disturbing behavior to escalate, enabling him to murder 17 classmates and teachers and injure 17 more at Stoneman Douglas High School in Parkland, Florida.

I have some more things percolating in the pipeline regarding the OEA. I received an anonymous tip that all of the teachers at Wake County’s SCORE Academy were pulled out of the classroom to attend a two-day ‘white privilege’ seminar called ‘Beyond Diversity.’

Not only were the teachers pulled out of class, so were the kids. The closure of SCORE for those two-days of white privilege training impacted around 300 kids.

The tipster said the seminar was ‘required by OEA and I have put in a records request for details. An initial response to my request from Tim Simmons, Director of WCPSS communications, said that “The Office of Equity Affairs does not require attendance at its sessions.” The materials sent to the teachers tell a different story.

For those unfamiliar with the SCORE Academy, it is one of four “alternative schools”  in the district. SCORE is run by Principal Jody Hinds and has two divisions – A and B. Most of the instruction is virtual through lectures given over the internet and components are web-based. Students are issued laptops for the duration of their tenure with the score.

The A division “serves as a re-engagement program for students between the ages of 16 and 21 who fit specified criteria according to the school’s policies.” Translated, this means kids who drop out and come back within a certain time frame to finish their high school degrees.

The B division is described as a “long distance blended learning opportunity for students who have been removed from their base school for violating a WCPSS student discipline policy.”  In other words, suspended students.