In this edition of Wake County Public School System (WCPSS) updates, we’ll look at my remarks to the Wake Board about the BIMAS-2, a subjective mental health screening being given at seemingly random school locations, the latest draft of the reassignment plan and schools that are failing.

A parent sends me a picture of another broken-down WCPSS bus, this time in the Fuquay-Varina area: 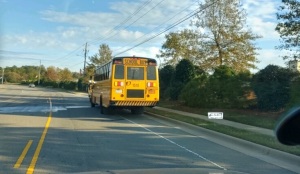 WCPSS piloted a mental health screening in half a dozen schools during the 2018-19 school year. This school year the plan is to experiment with this in 4o more schools and the list parents have cobbled together so far includes:

It needs to be mentioned that the number 40 seems to be a random number thrown out to the public at this point.

Parents asking for the list have been given only a handful of school names and the list seems to change each time the district is asked. The changes in the list are likely because district officials have said that the schools are individually deciding whether or not to participate.

Communications Director Tim Simmons told one parent that “Most schools are screening all students, some schools have opted only to screen certain grade levels. This decision is made at the school level.”

The district so far has refused to say what the true point of this is, who is collecting the data, where it is stored, who has access to it and what it is being used for.

I have a records request in place asking for more specifics, but it has not been fulfilled yet. In the meantime, I have been told that Paul Koh, the Assistant Superintendent of Student Support Services, is in charge of this circus. I will be emailing him this week, so stay tuned.

This mental screening assessment is not named in the parental notification letters which some parents have gotten but has instead been called a ‘social, emotional and behavioral assessment.”

This assessment is the BIMAS-2 and it relies on an already overburdened teacher to give their “best guess” when rating your child on a list of 34 criteria on multiple occasions throughout the school year.

The district has attempted to claim the BIMAS-2 is not a psychological assessment, but I contend that it is,  as the BIMAS-2 is being used to predict physical, emotional, or mental well-being.

The use of the BIMAS-2 appears to be in violation of the Protection of Pupil Rights Amendment (PPRA), which offers multiple protections to student privacy.

According to ABC 11, “The psychologist behind BIMAS said the mental health of kid should be screened just like vision, hearing, or speech, and it would offer educators a chance to step in to help.”

“I still feel good about withdrawing,” Green Hope High School parent Rachael Ayscue told ABC 11, adding that “(They should have been) much more transparent. Let us know why are we taking it, what’s going to be done with it and what’s the purpose.”

The letter that went to Olive Chapel parents compared the BIMAS-2 to “a quick temperature check.” 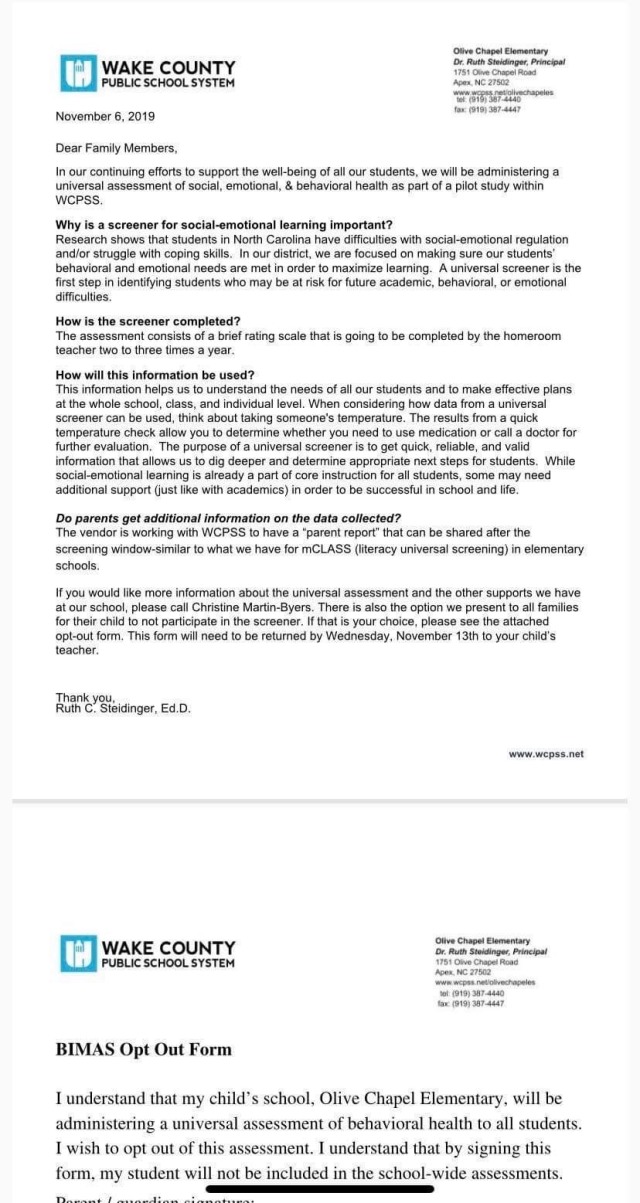 Parents can opt their child out, but the district has told me that parents have to opt-out each time the BIMAS-2 is administered. As a parent of a child in one of the experiment schools, I am not OK with this and I spoke out about it at the November school board meeting.

I asked the board to change this opt-out policy for invasive items like the BIMAS-2 and pointed out that the school should have been able to show me this assessment.

However, when I asked to see it, the principal violated district policy and my federal rights of inspection and then fobbed me off onto the disrtict communications department to respond to my request.

Opting out is apparently standard operating procedure in Wake County and that has to change. As I told the News and Observer:

“These are minor children, and the district has no business evaluating them medically or psychologically without the express written permission of their parents or legal guardians.”

Our children are in school to learn, not to be used as guinea pigs in the latest education fad. They are students, not pawns caught up in a data collection dragnet.

The district has a bad habit of treating parents like an inconvenient afterthought when we should be the first thought. These are our kids and what starts with parents, changes everything.

#2 – The Latest Draft of the Reassignment Plan

Draft 2 of the reassignment plan was released and there were significant changes. The News and Observer has a decent summary of what was altered:

▪ Students who were being reassigned from Highcroft Drive Elementary to Salem Elementary are now proposed to attend Turner Creek Elementary.

▪ Students are no longer proposed to be moved from Brassfield Elementary to Wakefield Elementary. It could be a temporary reprieve because student assignment staff said a revised recommendation will be made next year.

▪ Students who were proposed to be reassigned from Fuquay-Varina Middle to North Garner Middle are now proposed to attend West Lake Middle.

I truly hope Brassfield and Wakefield parents are paying attention because board member Roxie Cash said: “This is a delay for a bigger move.”

The WCPSS board is also trying to blame reassignment on K-3 class size reduction.

“There’s no mercy on these numbers,” school board member Christine Kushner said of the class sizes.”

This reassignment is not the big one. The board still is planning to take up district-wide reassignment of students using a “socioeconomic index.”

The WCPSS board spends at least 20-3o minutes each meeting patting themselves on the back for having visited a school or for something they tweeted about since their last meeting.

What you won’t hear them talk about are the continuously low-performing or failing schools in the district, two of which, Barwell Road and Bugg elementary schools, are now under consideration to be put into the Innovative School District (ISD) to be run by an outside group or charter operator.

But there Barwell and Bugg are not along.  Another six schools are failing.

The WCPSS Board has been crystal clear about their hatred for charter schools and very open about wanting to shut them down and Christine Kushner has insinuated on more than one occasion that charters are inferior to traditional district schools.

The WCPSS board are huge hypocrites on this matter. Here’s why:

Low performing is defined as a school that for two of the last three consecutive years, has a majority of students performing below grade level, did not exceed growth and did not meet a performance grade of “D” or “F.”

Under the 2010 Race To The Top grant, NC agreed to develop a program to reform low-performing schools.

That program that was developed is called TALAS, which stands for Turning Around North Carolina’s Lowest-Achieving Schools. TALAS has four options districts and schools can use for this reform: turnaround, restart, closure, and transformation.

The Wake school board applied for one of these TALAS models for six schools and their application was approved by the NC State Board of Education (NCBOE).

Here’s where the hypocrisy hits. The board chose was the Restart model, which mimics charter schools.

A.P. Dillon is a freelance journalist and is currently writing at The North State Journal. She resides in the Triangle area of North Carolina. Find her on Twitter: @APDillon_
View all posts by A.P. Dillon →
This entry was posted in Big Ed Complex, EDUCATION, LL1885, Parental Rights, Wake County School Board and tagged BIMAS-2, ISD, Reassignment, Restart Schools, WCPSS. Bookmark the permalink.