Buncombe teacher arrested on charges of having sex with a student

A Buncombe County Public Schools teacher has been arrested on charges he had sex with a student. 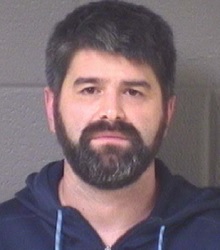 Keith William Grandy, age 37, is charged with two felony counts of sex acts with a student.

Sex with a student is a Class G felony carrying a sentence of 8-31 months for each charge.

A statement by the Buncombe County Sheriff’s office says that a search warrant was executed on Grandy’s residence on Nov. 13, the same day he was arrested.

The press release also said Grandy has been suspended by the district is being held at the Buncombe County jail under a $65,000 secured bond. The next scheduled court appearance is set for today, Nov. 14.

Grandy has been teaching at North Buncombe High School for the last year and according to his bio page on the school’s website before it was taken down. The cached version of the page called “Welcome to Grandyland” still can be accessed.

According to his staff webpage, Grandy taught level I and II English classes. The bio also says he was previously a head start teacher and taught at both East Chapel Hill High School and Madison Middle School.

Grandy’s North Carolina teaching license is for the areas of English 9-12 and Language Arts 6-9. His license will expire in June of 2020.