Yesterday there was a lot of discussion about the Wake County Schools (WCPSS) budget ‘shortfall’. That shortfall has a price tag of $16.8 million.

Given that WCPSS has over a billion dollar budget, what transpired yesterday should have parents questioning how the board spends their money.

Even the News and Observer’s Ed columnist thinks it’s a big deal:

.@WCPSS asks for full $35.7M increase from @wakegov commissioners or else warns cuts & higher fees may be needed https://t.co/15bdtI3Jnx

How does the WCPSS board plan to make up the shortfall? By cutting services and raising taxes.

Imagine a Republican majority school board doing this. Imagine the outrage.

Keep imagining, because there will likely be no outrage from the vocal Left leaning non-profits and protest groups. 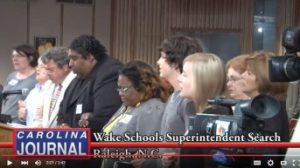 Don’t expect Rev. Barber to protest this board over cutting anything either, he’s too busy being upset that legislators want to keep tuition and fee hikes from hitting students in the UNC system.

Going back to that list of cuts — Did you notice the second part of the last item on the list above?

WCPSS already boosted teacher supplemental pay. WCPSS’s supplemental pay was already one of the top 3 largest in the state before the boost.  The board made a huge production out of it too. Now, due to their arguable lack of planning in other areas, they are proposing freezing it.  Hey, it’s a book out of Governor Perdue’s  freezing Teacher Pay playbook!

Good on the News and Observer for including the ‘blame shifting’ this board is trying to pull with these proposed cuts.  Maybe if this board was half as invested in cutting their administrative bloat, social justice warrior infused positions and pandering to special interest groups, we might see a different budget story.

Don’t forget, this board wants yet another Bond too.

Keep scrolling down the News and Observer article and you see the punchline: Board approves $1.98 billion building program.

That new building plan spans 7 years, multiple miscellaneous items, 14 schools and 11 new projects.  All of this to accommodate growth; a growth rate which this board has inaccurately estimated in the past.  The real growth in Wake county comes from homeschooling and charter schools.