Alright, this is going to be a long article. Get your coffee and settle in.

At the News and Observer, the headline reads, “NC education department used Koch-funded group for proposed history lessons“. Take a moment to go read it, but don’t be sipping that coffee when you do.  I have to admit, even for News and Observer, this article was a bad joke.  I left a comment on the actual article which I am not going to rehash but has important points in it; you can hit that at the bottom of this article. 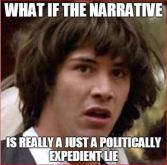 The thrust seems to be that because NC’s Department of Pubic Instruction (DPI) used resources from an education group who received a grant from the Koch brothers, that somehow the highly controversial and liberally biased new APUSH (AP U.S. History) framework is needed as some kind of counter-balance.

Stop laughing.
That’s what Bonner was likely shooting for.  A ‘hey look, evil tea party money!’ moment.  This is a narrative, not news.

The subtext here is that our Superintendent chose this path instead of drawing from NC resources and was likely innocently batting her eyelashes as Bonner questioned her on it for the article. This is the same woman who brought us the Common Core with no public vetting and signed NC up for Race To The Top Money by naming Common Core by name in the grant — nearly 6 months before the standards were released to the public. Factor in our state board of education did not vet the standards and rubber stamped their adoption on June 3rd, 2010. The standards were not released until June 10, 2010. Stick all that in your pipe and smoke it.
(Read the timeline on Common Core in NC here.)

Folks, this is a head fake.
It’s a transparent smear campaign to distract from the APUSH framework and the litany of issues with it. This method of distraction is what we bloggers call yelling ‘SQUIRREL!”.  Make a lot of noise over here, so that no one pays attention to the real issue over there.  Got it? 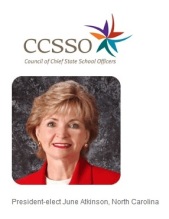 By the way, June Atkinson is now the full President of the Council of Chief State School Officers (CCSSO).

The CCSSO, along with the National Governors Association, hold the copyright on the Common Core. A copyright Dr. Atkinson has dismissed as no big deal, yet when asked about the APUSH framework at State Board of Education meeting, Atkinson said the copyright was important.
So which is it? Are copyrighted standards alright or not?

Atkinson, to date, appears to fond of outside entities controlling NC standards and curriculum.  That begs the question, what is Atkinson’s job then?  Given the legislature has had to step in and put things like multiplication tables and cursive writing back in, it is a valid question to ask. More to that point is the need for the Founding Principles Act in the first place.  What is going on that the legislature has to step in and patch holes in our state standards and curriculum?

Here’s the skinny on APUSH
It’s a hot mess.  As Jane Robbins accurately describes it, “a leftist polemic that presents American history in a relentlessly negative light”.

The new APUSH framework was led by David Coleman, President of the College Board. Coleman is also one of the chief architects of the hotly contested Common Core. Are you surprised Bonner left that out of the article?

On Monday, the State Board of Education held an ’emergency’ meeting to debate APUSH. Larry Krieger was on hand and went head to head with a representative of the College Board.

From accounts of those who attended, Krieger made his case. Audio that was supposed to be available for the public to listen in was riddled with errors and kept dropping people. I obtained the audio from DPI. Link to downloadable audio file; have pop-ups enabled so the download box appears: https://dl.dropboxusercontent.com/u/74990182/SBE120114.rm

Back to the squirrels and smear campaign
100k grant from the Koch brothers. That’s the big bogeyman attempting to be employed here. The charge here is to protect the narrative.

You protect it by not asking questions or you know, reporting? That means not ignoring the stark hypocrisy in pointing out money from one side, in this case a $100k grant versus the tidal wave on the another side.

Speaking of tidal wave – How about the over $3 billion Bill Gates has dumped into Common Core grant to curriculum writers, app makers, non-profits, school districts (including ones in NC) and even to the Dept. of Education? Even Diane Ravitch is calling for Congress to investigate this educational coup.

Nah, that doesn’t fit the narrative of protecting APUSH and providing Atkinson some cover while at the same time bashing the GOP held General Assembly.

Some additional thoughts
I left a lengthy comment on the article itself, which I will add at the bottom of this article.  NC media are notorious for this type of whitewashing of their ‘sources’.

Some highlights from that comment on those ‘sources’ Lynne Bonner turns to in order to support their position which include Moral Monday, Occupying, NCAE Organize2020 member Bryan Proffitt.

News and Observer bills Proffitt in the article as a ‘Durham teacher’. The guy is anything but just a teacher.  Excerpt from N&O:

“People whose “principal concern is profit-making” should not develop curriculum, said Bryan Proffitt, a history teacher at Hillside High School in Durham. Curriculum should be developed “in a democratic fashion” by people closest to the classroom, he said.

Tell me, Mr. Proffitt – where do you stand on Common Core?
Because what is happening with APUSH is very similar.
Newsflash – very few groups or people are out there not making profits on something. Good luck finding someone out there to make things for free, including curriculum.

Another source quotes is Harry Watson, history professor at UNC-Chapel Hill.  Given the scholarly scandals going on at UNC Chapel Hill, I don’t know that I would have used that source. Perhaps Bonner thought because Watson spoke out, that made him above reproach to quote.

Also, Bonner neglects to mention UNC-CH has received Koch grants in the past. I think the most recent one was for just over $116k. So have a lot of schools across the country and right here in North Carolina like Duke, UNC Pembroke and UNC Greensboro.  Oh, the horror.

Text of my comment on this biased and journalistic embarrassment below.

There is so much wrong with this article, it’s hard to know where to start.

OH NOES, Koch brothers gave a grant of 100k to an education related group!
Oh no, that’s horrible. It’s also horrible they give money to PBS’s NOVA — are all of you going to stop watching that now?

First, recognize a desperate distraction via a smear campaign when you see one. This article is just that. One really had to dig deep on this on this to put some kind of bogeyman spin to give Atkinson cover for basically attempting to skirt the law. DPI has too much power and too little oversight.

Second, the premise that June Atkinson couldn’t find anyone else to consult with on History — Do some homework people, that’s bunk. Even if it wasn’t, that would mean that DPI, led by Atkinson, had no one here in the state to write history curriculum? Please, tell us some more lies since AP had no problem finding Ted Dickson to write for their new 95 page framework?

Third, $100k is a drop in the DPI contract bucket, Bonner and you know it. How about those big, juicy Pearson contracts costing taxpayers millions? Not a peep.

Fourth, let’s ignore Bill Gates dumped over $3 billion into Common Core, which DPI and June Atkinson have NO problems with. Gates, Lumina, Hewlett, Carnegie — these groups have basically BOUGHT our education system. N&O and media would rather trash parents than do their jobs and actually report on that or report on about Atkinson and Perdue signing NC’s Race To The Top grant and they put Common Core in it by name… around 5 months before the standards were even released or adopted by our state!? Nothing? Crickets?

Fifth, DPI has relationships with outfits here in NC with deep ties and funding coming from Gates. Have you looked at the Hunt Institute? Of course not, it doesn’t fit your narrative.

Sixth, Don’t forget the guy who in charge of changing the AP history framework? David Coleman? He was one of the main architects of Common Core. What a coincidence!

Seventh, Larry Krieger has been very specific and cited quite a bit wrong with the AP Framework. There was an emergency school board meeting Monday where Krieger took on a College Board representative. None of that is linked here in this story — doesn’t fit the narrative!
I’ll fix that lack of opposing views to APUSH here with quite a repository of links: http://stopcommoncorenc.org/?s=apush

Eighth, Rep. Horn – All due respect, but MAN UP and get a clue. You’re being roped into a smear job. Don’t aid them; Push back.

Ninth, Bryan Profitt? Not just some teacher from Durham. You guys keep quoting this guy and painting him as this run of the mill guy. Hardly. He’s an NCAE Organize2020 agitator, an occupy supporter, Moral Monday supporter and far left liberal (http://wp.me/p14vwx-2vl) with a thing for women’s genitalis and Hitler, no, not kidding. Scroll to the bottom here: http://wp.me/p14vwx-2KN

Tenth, the UNC guy? West? After the Wainstein report, I don[‘t think I’d be hitting Chapel Hill for any quotes any time soon. Just saying.

UPDATES: Some related reading over at John Locke. For those in the comments and their ‘smear claims’, enjoy.

The Kochs (!!!) are so powerful that even Democrats are under their control