For more about Barber and his arrest antics read: Playing the Bus Card

Everyone get excited for more arrests, chanting and festivities in front of the state

legislature! By the way, no one gets arrested at these things that doesn’t want to be. It’s a stunt for media attention.  The gang will all be there, with the NAACP and AFL CIO leading the charge.  Oh and Occupy Raleigh is going to show up too, what fun! We know how mostly peaceful things stay when Occupy joins in. Sorry if I seem a little flip about these protests, but living in the Triangle region makes one a little fed up with Barber and his endless three ring circuses.

This MEGA Meltdown Monday is special though, it even have a snazzy video complete with slogan:

Join the Forward Together Movement for a Moral Monday Mass Rally and Action on Monday, June 3, 2013 at 5:00 pm. The 5th Wave of Moral Mondays will lift up three pillars of democracy: Education, Economic Justice and Voting Rights.

“Don’t try to make this about Black and White, this is about right and wrong!” – Rev. Barber

Yeah, whatever. Nothing is about right and wrong with Barber. He’s not interested in what’s right, he’s just interested in slamming Republicans no matter what and has been ever since they took control of the NCGA. Everything is about Black and White to Barber, because RACISM! So shut up you Teabaggers!  Now go read this misleading lede from WRAL’s ‘professional journalist’ Laura Leslie and hush.

The NAACP sure is fired up. They’re even doing a statewide tour, so no one will miss out on the arrests:

RALEIGH – The 25-stop Forward Together Movement Local Organizing Tour will launch tomorrow in Raleigh and crisscross North Carolina over the next two weeks, spreading the word about the Tea Party-backed extremist forces who have high-jacked the NC General Assembly.

More video and outrage at the NAACP site. You know, the NAACP in NC is a 501(c)4. Wonder if they were harassed by the IRS?  Hmm. Well, it doesn’t matter because the Executive Council of the North Carolina Democratic Party passed a resolution today:

Resolution in Support of Moral Mondays

“WHEREAS, our great state of North Carolina is being dragged back into the 19th Century by Republican legislators passing regressive legislation signed into law by Republican Governor Pat McCrory.

THEREFORE BE IT RESOLVED, that the the North Carolina Democratic Party supports the Moral Monday effort at the NC General Assembly to show our objection to these regressive actions; and

THEREFORE BE IT FURTHER RESOLVED, that the North Carolina Democratic Party encourages Democrats to go to the NC General Assembly in Raleigh to support Moral Mondays.”

Updates will be posted after the mayhem ensues, that is of course unless they get rained out which is highly likely given the forecast.

Today’s the day! Mega Moral Monday at 5pm today at bicentennial mall across from the #ncga. Will you be there? #shedecides#moralmondays

And Occupy.. with live stream. No such stream is found yet on Ustream as of this morning.:

This Amaris Brown person is quite the charmer.

1:30 PM Update- Melissa ‘All your kids are belong to Us’ Harris Perry to attend?

1:45 PM Update – I snarfed my drink laughing at this parody with accompanying image below

Oh, we have a shout out from the left:

Are you coming to the #MoralMonday event tonight? Here’s why you should: http://t.co/8Wuy9UCV1G#reoccupy#ncleg#ncpol

A truly landmark day in NC as thousands head to the capital to stand for justice. We will not let our lawmakers defund our futures and cut our opportunities. Forward together, not one step back!

LiveStream Feed here. Sounds is missing. Fail.  As I said, the whole point is to get arrested:

And having to prove who you are to vote is, of course, voter suppression – so sayeth race hustler Reverend Barber:

“It is extreme and immoral to engage in voter suppression tactics.” -Reverend Barber #MoralMondays

Hasn’t occurred to anyone that this one has more people because every lefty group out there decided to show up.

No, actually… this is the Left throwing a temper tantrum and protesting the GOP just to protest the GOP:

This is the south. Justice. Freedom. #ncga#ncpol#MoralMonday

5:45 PM Update – Oh look, Lefty Mayor Chilton has decided he wants to be arrested too. Felt left out I guess. Stay classy!

Protest organizers say they expect abt 100 arrests tonight at #NCGA. Carrboro Mayor Mark Chilton is said to be one of them. #ncpol

5:55 PM Update – We find the hackneyed and tired ‘GOP hate the poor’ meme. I’m sure a social justice tweet is out there somewhere too.

The general assembly and governor of are engaged in a potent pervasive war on poor and low income n. Carolinians – gene Nichol #moralmondays

Just like I said, no one gets arrested that doesn’t want to be:

And now for a LOL:

Socialists unite! RT @democracync A fired up crowd is starting to gather behind the #ncga for Mega Moral Monday #ncpol

6:06 PM Update: Planned Parenthood in the house – because, MY BODY MY CHOICE…and YOU PAY FOR IT OR ELSE!

And now for a moment of truth:

Primary goal of #MoralMondays is for far leftists to get arrested & put it on their “civil disobedience” resume. Laughing hard. #NCGA #NCPOL

@LadyLiberty1885 it’s all about attention. Most activist liberals are narcissists at heart. #NCGA #NCPOL #MoralMondays

Followed by a LOL:

Now it comes out why the big crowd, NC Justice Center sent out an attack mailer and it was written up by none other than WRAL hack, Laura Leslie :

Melissa ‘All Your Kids Belong To Us’ Harris Perry actually showed up (via Sean Langberg on Twitter):

And another Occupy/NC Student Power person who wants to be arrested:

Shout out to another NCSU student power member getting arrested today pic.twitter.com/qdsWE4ipDY

6:20 PM Update – The buses are ready to haul off those who are just dying to get arrested. Crowd being told to disperse.

#popcorn cc: @LadyLiberty1885 RT @astrogirlnc: #moralmonday being told now to disperse in 5 min or will be arrested #NCPOL #NCGA

WRAL makes sure everyone knows creepy Melissa Harris Perry is there:

Extremist? You mean like the state taking care of our kids instead of parents? My God that woman creeps me out.

Occupy makes sure they’re being paid attention to:

6:27 PM Update- And…. TOUCHDOWN!  National attention in order to attempt to shame the NCGA, of whom the people elected to clean up the Democrat mess left by Perdue and her ilk:

.@MHarrisPerry Excited that you’re covering the story. NC #MoralMondays is a movement that should garner natl media attention.

And the Mayor of Carborro just got arrested. What a resume enhancer! Via Dianne Gallagher on Twitter: 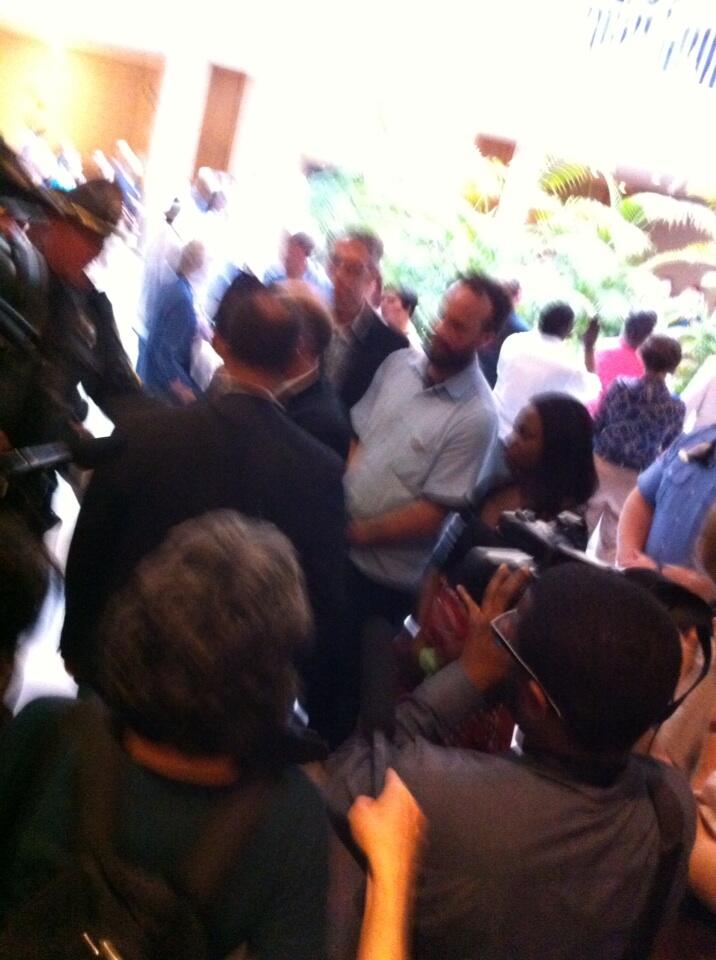 More arrests are now happening. I’m not linking to them — the attention is what they want. It’s the same tactic used by Occupy. Color me not only unimpressed but embarrassed for them.

6:35 PM Update – More arrests. I’ll have the tally later as I am sure WRAL will post it since they were there. Only ones of real note are 4 Carborro Aldermen and the Mayor of Carborro.  Quick rundown of the attendees list which is a who’s who of the Organized Left in NC :