Since last Spring, I’ve written several times about the Wake County School Board’s plan to reassign students based on a combination of numbers that make up a “socioeconomic index” as a proxy for race.  I was asked to consolidate the information, hence this article.

I encourage all readers to stop and read my July article summary that includes key quotes from board members and context before proceeding with the rest of this article.

At the WCPSS board’s June 1, 2019 retreat, they discussed their ‘diversity plans‘ and announced that “resegregation” was not going to happen “on their watch.”

Here is a verbatim copy of the resolution they produced at that meeting:

The crossed-out text is accurate. The Wake County School Board views diversity as the only priority and if parents disagree, well that’s just tough. Everything else about where your child goes to school is secondary to the board.

That house you bought in that neighborhood you like next to that school you love? Forget it. Your kid might not even go there under this assignment plan.

The result of the board’s resolution has been to focus on revamping the district’s assignment policy — or rather, it has become an effort to reassign kids using something similar to the College Board’s “adversity score.”

By using a similar method and substituting economic factors as a proxy for race, the board hopes to avoid being sued.

In July 2019, this timeline was produced to start the socioeconomic reassignment ball rolling:

The original timeline was pushed back and delayed. The more recent one is below. 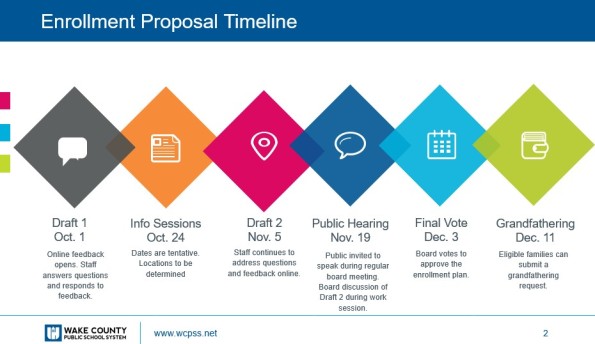 There was another delay and this plan has not been brought up again yet this year, but that doesn’t mean it isn’t in motion behind the scenes.

The Socioeconomic Index: Your kid is a number. So is their school.

At the July 2019 meeting, the News and Observer’s Keung Hui tweeted a number of times about the board deciding what “socioeconomic” factors would be used to move kids around the district to achieve the board’s desired levels of “diversity.”

The board discussed and later approved using the Wake County Economic Health Index to do that kid/school shuffling.

District staff used this Index to assign a socioeconomic score to every school. That score was based on the average of the scores of all students attending them. What this means is your child has a score floating above his or her head that will determine what school the school board thinks they should be allowed to go to in the name of maintaining “diversity.”

These goals were recommended to be part of a five-year plan and should be met by the 2024-25 school year. The reality is that there can be no end date because this will be a constantly moving target.

On the flip side, that means 74% of elementary schools, 63% of middle schools and 58% of high schools currently are ‘just fine’ according to the school board’s “socioeconomic index score.”

So, what is the board really talking about doing here? What is this? It’s a new and improved version of busing for diversity.  Kids will be uprooted from their local schools and bused around in an effort to maintain an ever-changing and self-imposed diversity score.

To be blunt, this is akin to repeatedly trying to nail Jell-O to a wall and wondering why it won’t stay put.

Swapping kids around from school to school in the name of diversity has become more prevalent in other states beyond North Carolina. A must-read on this trend is The Federalist article, Public Schools Revive Racial Segregation In The Name Of ‘Diversity’.

The Federalist article astutely notes that districts like Wake County that try to re-sort kids in this manner are actually using the absence of white students in their calculus and are themselves the ones engaging in segregation.

Another article on this topic is Adams: New York City Has a Plan for Completely Integrating Its Schools. Great. Now Can We Talk About Why Kids Aren’t Learning?

If this all sounds familiar, that’s because it’s all happened before, back in 2009.  The board members running who promoted neighborhood schools and parents who wanted the choice of the neighborhood school model were called “resegregationists” then too.

Jim Martin, the chairman of the nine-member school board, said he and his colleagues are mindful of the past. The district has chosen to keep student assignments fairly stable for the past several years in order to ease a chaotic situation created by the previous board.

“We don’t want to go back to a time where it felt like the school board was rearranging pawns on a chessboard,” said Martin, a chemistry professor at North Carolina State University in Raleigh, who is white. “Student assignment is one of the tools to address equitable and integrated schools. It is not the only tool. It’s not just about busing.”

With that said, “the whole issue of having, strong, equitable, diverse integrated schools is why I ran for office in the first place back in 2011,” Martin said. “We have not been able to reverse some of these increasing segregating trends, and that is a deep frustration.” Socioeconomic equity, Martin said, means more resources at a school level, which drives “opportunity creation.”

Martin admits busing is going to happen but neither he nor any board member has said what other tools they will use beyond busing. Why? Because there are none. In order to achieve this socioeconomic shuffle, busing is a requirement.

“There doesn’t seem to be any active effort to reach out to parents and ask them whether they desire this, or whether this would make their decision to stay in the Wake County public schools or go to a school of choice any different,” said Stoops, whose children are enrolled in a district magnet school and in a charter school. He believes the board is floating a trial balloon by talking about a renewed commitment to diversity.

“But their unwillingness to make this change over the last eight years is an effort to keep the board in the hands of a Democrat-backed majority. This is an instance where politics trumps their ideology,” he said.

Stoops captures an issue here that has become a real flashpoint – this board’s willingness to ignore parent concerns in favor of their political ideology and agenda.

It is important to understand that this board created the conditions which have led to a steady exodus of students and families from the district. Many parents may recall it was this board also ignored parents in the name of their own agendas several years ago by denying in-district transfers.

This is not a new fight, but the scale of which the Wake County Board is planning to move kids around is. Parents have already raised concerns. They’ve spoken out at the meetings. They’ve even written letters, but the board is still moving forward.

The children who will be caught up in the school board’s plan will be uprooted from their neighborhood schools. Students will have a literal numerical target on their back and can forget having any stability. This will impact their friends, sports, clubs or being close to home. It will also impact their grades, their parents’ schedules, before and aftercare and a whole host of other related issues.

It hasn’t been spoken of yet, but under this assignment plan, but clearly, there is the potential for a student to be moved multiple times.

More than just students will be impacted

This plan will not just affect those with children and their families, it will impact every single taxpayer.

You really kinda do: “'This is a public school system,' she said. 'You don’t purchase schools when you purchase your house.'” https://t.co/uPGQjxgCJU

This socioeconomic index plan isn’t about diversity. It’s the masking of failure by making all schools look the same. This does not help the failing kids or schools. It just perpetuates the problem, only now it’s just better hidden from view.

It is a well-known fact that good schools draw housing and then businesses follow. School choice models involving migration of families and business to charter school locations has underscored that fact. People live where they want to live, but schools play a role.

It is not a stretch to think property values will drop, home sales will be upended, businesses will then fail or move. Whole towns could be impacted. Another thing to consider is what such manipulations would do to voting precincts.

Wake County taxpayers have already been hit with five years of rate hikes. More and more money has been given to Wake County schools each year and its budget is set to break beyond $2 billion this year.

One has to as what has increased funding for a decreasing student population wrought? Stagnant test scores, an increase in social justice activities and programs, a decrease in real academic instruction and third-grade children who are not reading a grade level. Now, there’s the added uncertainty of where our children will end up going to school from year to year.

To be clear, diversity is a good thing, there are benefits and efforts to boost it are good-intentioned. But forced diversity? That’s actually engaging in conscious segregation and social engineering.

Friendly reminder: All nine of the Wake County school board seats are on the ballot this Fall. The candidate filing period opens in June.

A.P. Dillon is a freelance journalist and is currently writing at The North State Journal. She resides in the Triangle area of North Carolina. Find her on Twitter: @APDillon_
View all posts by A.P. Dillon →
This entry was posted in A.P. Dillon (LL1885), Big Ed Complex, EDUCATION, EXCLUSIVE, Parental Rights and tagged Reassignment, WCPSS. Bookmark the permalink.