Feds to Oregon: Nice Funding ya got there, be a shame if anything happened to it

‘Nice funding ya, got there. Be a shame if anything happened to it.’

That’s what the Department of Education is basically saying to Oregon over the state’s Bill 2655.

The federal government has leveled an official threat at a state over testing compliance as stated in ESEA, the Elementary and Secondary Education Act of 1965.

Bill 2655 threatens to topple the 95% compliance rate for testing as dictated by ESEA.

Parental rights? What are those?

According to Oregon Live, the threat came in a letter from, Deborah Delisle, who is the Assistant Secretary for Elementary and Secondary Education.

“Oregon schools stand to lose $140 million a year or more in federal funding if state lawmakers vote to enable parents to opt out of standardized testing more easily, a top U.S. education official is warning.

Legislation headed for Oregon Senate approval as soon as Wednesday could trigger serious sanctions that include the loss of federal funding, Assistant U.S. Secretary of Education Deborah Delisle said in a May 27 email and letter to Oregon schools chief Rob Saxton.”

According to Delisle’s bio, she previously held multiple positions at the Council of Chief State School Officers (CCSSO). The CCSSO is one of the D.C. trade organizations who helped create the Common Core. The CCSSO is also one of the copyright holders of the standards.

According to KOIN.com, the Portland Association of Teachers is calling the threat a ‘scare tactic’.

The message here seems to be pretty clear: Comply or no cash.

Ironically, one of the main points of the Department of Education Organization Act (1979) is being employed, but in a tryannical fashion:

“Encourage the increased involvement of the public, parents, and students in federal education programs.” 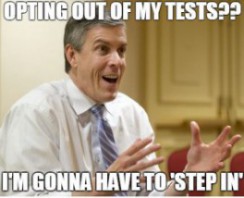 Arne Duncan said ‘the fed would have to step in’.  People wondered what that statement meant.

The Department of Education will force states to comply through fiscal blackmail using money collected from the states themselves.

A.P. Dillon is a freelance journalist and is currently writing at The North State Journal. She resides in the Triangle area of North Carolina. Find her on Twitter: @APDillon_
View all posts by A.P. Dillon →
This entry was posted in Common Core, EDUCATION, Parental Rights, Testing and tagged Arne Duncan, Opt Out. Bookmark the permalink.

1 Response to Feds to Oregon: Nice Funding ya got there, be a shame if anything happened to it