A Freedom of Information Act request sent to New Hanover County School System has yielded a letter sent by Gary Salimido of the NC Chamber of Commerce to the Common Core Academic Standards Review Commission (ASRC).

The letter from Salamido came attached to an email from Andrew Meehan of the Chamber’s Common Core coalition, “Hire Standards“.

In the letter, Salamido urges the co-chairs and the commission overall to look at rebrand states like Florida and Kentucky.

The letter also calls into question the solicitation of feedback from parents. The Chamber wants parent and teacher feedback to come before revisions are made.

Mr. Salamido, the Chamber and related parties have had numerous opportunity to comment. We (parents and teachers) have had one opportunity to speak out.  Did you miss the 40 of us at the Legislative Research Commission who stood up and spoke out?  We continue to comment through phone calls, emails, tweets and letters because, to date, that is all we have been afforded in this ‘public discussion’.

Let me also remind you, Mr. Salamido, that our children are not your ‘workforce’ as you so callously described them at that same Legislative Research Commission forum. It was not missed by those who attended that you didn’t use the word child, children or kids a single time. Your talking points from that forum had no empirical data or proof behind them then nor do they have any now.

Co-Chair Tammy Covil fired back a response to Mr. Salamido.

Her response sets the record straight on a number of accounts, but addresses the feedback concerns (and hypocrisy) of the Chamber of Commerce quite effectively. I’ve included that portion of the letter below:

You seem to suggest that feedback from the businesses community is more valuable than those most impacted by academic standards – teachers and parents.  To paraphrase SB 812, it is the ASRC’s charge to make sound, meaningful, and evidence-based recommendations regarding standards revisions.  It would stand to reason, therefore, that input from the primary stakeholders involved is critical.

If you’ll note the timeline, we will soon establish teacher and parent subcommittees.  These committees will not only assist us with the final review of our recommendations, they will maintain an active role in the revisions process as well.

Pardon my candor, but I fail to understand how feedback from corporations predominantly interested in protecting their financial investments would be more relevant than a classroom teacher or parent’s perspective.  I will add that many of the organizations the Chamber represents were covertly and intimately involved in the development of BEST NC’s 20/20 Education Vision Initiative.  There are far too many of them to list here.  Suffice it to say, the stakeholders conspicuously absent from that list are classroom teachers and parents.

I can’t help but note the irony in bemoaning a misconstrued inability to offer feedback, while simultaneously prohibiting the public (through secrecy and concealment) from participating in an identical opportunity.  That said, those wishing to offer testimony are encouraged to do so any time via email. 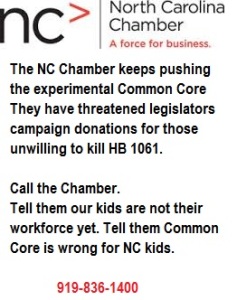 In conclusion, it would appear that the Chamber, by way of this letter to the ASRC,  is now trying to influence what direction the commission takes to do its work?

Perhaps that is because the commission is actually performing the work intended by SB 812? Replacing and not rebranding?

If South Carolina can do it, so can we.

Reminder: The Chamber bashed HB 1061 and backed SB 812, which created the Commission in the first place.

Reminder: The Chamber threatened to choke of donations to legislators who didn’t go with the bill they wanted.

“The big stick the business people are using is the threat with campaign contributions could slow down.” – Gene Arnold, NCSPIN 5/15/14

A.P. Dillon is a freelance journalist and is currently writing at The North State Journal. She resides in the Triangle area of North Carolina. Find her on Twitter: @APDillon_
View all posts by A.P. Dillon →
This entry was posted in A.P. Dillon (LL1885), Academic Standards Review Commission, Common Core and tagged ASRC, NC Chamber of Commerce. Bookmark the permalink.