A special education teacher in the Cleveland County public school system has been arrested and charged with taking indecent liberties with a student. 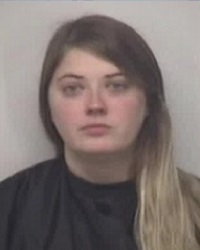 Whitney Fite Baker, age 28, was arrested on three counts of taking indecent liberties with a student. Baker was issued a $25,000 secured bond which she posted.

Taking indecent liberties with a student is a Class I felony that carries a sentence of 3-12 months per count.

Outside of the courthouse, WSOCTV and the Shelby Star captured video of the mother of the 15-year old victim confronting Baker.

“Why are you covering your face? “You weren’t covering it when you were sending the photos and videos,” the accuser’s mother said to Baker as her mother led her to a car with a jacket over her face.

“Neither was your boy,” Baker’s mother yelled back referencing the alleged photos and video sent back and forth on social media.

“I sent my child to school to get an education, not this,” the mother told WSOCTV reporter Ken Lemon.

Baker taught at The Turning Point Academy, a Cleveland County public school located in Shelby. She began working for the district in 2017 but according to media reports, Baker no longer works for the district.

“We are thankful for the support of our local law enforcement agencies in Cleveland County and appreciate their diligence in ensuring the safety of our schools,” said Greg Shull, Communications Director for Cleveland County Public Schools.

According to its website, Turning Point Academy is an “alternative schools” which serves students with discipline issues:

The school’s website says many of the students attend year-round and that “A majority of Turning Point students are court involved and are connected directly with the Cleveland County Department of Juvenile Justice.

Baker has a valid NC teaching license in the area of Exceptional Children: General Curriculum (K-12). That license, unless revoked, will expire June 30, 2020.

Since the beginning of 2019, Baker is the 56th school employee arrest tracked by this website.

A.P. Dillon is a freelance journalist and is currently writing at The North State Journal. She resides in the Triangle area of North Carolina. Find her on Twitter: @APDillon_
View all posts by A.P. Dillon →
This entry was posted in CRIME, EDUCATION, LL1885, Quiet Epidemic and tagged Cleveland County Public Schools, Quiet Epidemic, Whitney Fite Baker. Bookmark the permalink.