In this edition of WCPSS Updates, there is a litany of bus-related stories including the continuation of the special needs busing saga and a bus engine bursting into flames with students on board. Also, an update on the school board’s reassignment plan.

In case you missed it, here’s the previous edition of #WCPSS Updates: Supt. pay is raised while special needs kids have no buses, plus MVP Math, Reassignment draft delays and who is watching the kids?

Families with special needs kids in Wake County Public Schools (WCPSS) who do have busing find it is unreliable, according to one family in a WNCN report:

The McAward family said in the last seven-plus weeks of school, a driver has picked up their son three times.

“We sit around and wait and maybe they’ll show up, maybe they won’t,” Gavin’s dad Ryan McAward said.

According to the above report, the district has shunted communications on special needs busing issues to the school. To add insult to injury, the family says the school doesn’t reach out to you unless you call them first.

Another father ended up on social media trying to find satisfaction from WCPSS after no one picked up his son:

I don't usually air customer service grievances on Twitter. I am in this case, so you know it's bad. @WCPSS: you have to do something about @RideSTBus. No one came to pick up my special needs son for school this morning (or anyone else on his bus).

Yet another case is a single mom in Raleigh with an autistic child, as reported by ABC 11:

A Wake County single mother has been losing out on about three hours of pay every day so she can do someone else’s job and bring her special needs child to school.

Horton says he has been left behind by the Wake County School System and the district school bus just stopped showing up.

According to ABC 11, “Horton reached out to the school and the Transportation Department but says she’s getting the runaround.”

A letter was sent out to parents of Special Needs students in August telling parents at 61 schools, which is 32% of the 191 total public schools in the district, that there would be no transportation available for them.

The letter informed parents that they will have to drive their child to school until further notice and that they will be reimbursed at the federal rate for mileage to do so.

In March, the Wake County School Board asked for almost $5 million for “unanticipated transportation expenses for the 2018-19 school year,” and requested an additional $3.5 million dollars to cover transportation for roughly 4,200 special needs and homeless students.

David Neter, WCPSS Chief Operating Officer told the News and Observer in March that changes were being made to the bus contracts with some of the companies not being rehired for the 2019-20 school year and that the school board would vote on the new contracts. 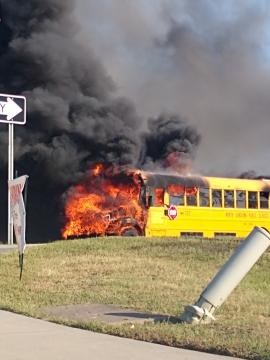 In related WCPSS busing news, a bus burst into flames last week while on Highway 55 in Cary.

At least one parent is very upset as WRAL reported:

Chris Michaels and other parents waited for their kids to file off the school bus one by one on Friday, one day after bus No. 1122 caught fire and burst into a ball of flames.

“We get crickets, absolute crickets. It’s nuts,” Michaels said. “And if they can’t figure out the problem, heads need to roll. People need to resign or we need a change of leadership there to make sure we’re actually getting safe buses for kids.”

In addition to buses bursting into flames, CBS 17 reports that “According to Wake County Schools, out of the 756 buses used daily by WCS only 15 of them have working stop-arm cameras.”

The board made a huge deal about enrollment and reassignment using a proxy for race during their July meeting. By the following meeting in August, the school board’s staff had come up with a “socioeconomic index,” of which there is now no mention of in the current reassignment proposal.

We also have not seen or heard again from the reassignment “facilitators” (Frederica Nash and Michael Martin) from RTI who in July suggested that in order to push a socioeconomic index assignment plan forward, “We have to reset the base program for all schools.”  It’s worth noting that since 2016 WCPSS has made payments to RTI totaling $382,948.

But just because the “socioeconomic index” isn’t being mentioned out loud doesn’t mean it isn’t being employed in the current proposal which the board is calling an “enrollment policy” change.

Why call it a reassignment plan when the Board is calling this an enrollment policy?

The fact parents are having to check to see if their kid is bused off to another school instead of the one around the corner from their home makes this is a reassignment plan.

Families in Holly Springs and Fuquay in southern Wake County will be seeing their kids shipped off to a school in North Garner if the Wake County School Board approves this latest reassignment plan.

Going forward, families moving into these areas will be forced to enroll in the schools put forth by the board, which in this case means North Garner. I can’t imagine the mayors of Holly Springs and Fuquay Varina are thrilled by this.

It’s hard not to notice that the Wake school board has shuffled southern Wake county kids multiple times over the last three years.

It was just over a year ago Cary parents were protesting the board reassigning their kids from Davis Drive to East Cary. Two years ago, the Wake school board had Garner, Apex and Holly Springs parents protesting reassignment changes that impacted children at four elementary schools.

According to the current draft plan, the changes are being made “To keep up with population growth and prevent the overcrowding of schools.” This was part of the reason they moved kids around in 2017 and 2018.

The current draft says that the district is building a new elementary and a new high school in Fuquay:

These two schools will be finished next year and the year after. If these two new schools are being built and are opening in the next two years, will the kids the board is proposing to ship to North Garner just have to be reshifted when these new schools are finished?

For some Holly Springs families, this is the second such reassignment in as many years. In addition, it should be noted that many of the families who protested MVP Math are reporting their neighborhoods are ones being forced to switch schools under this plan.

As one parent told me, “This can’t be a coincidence that MVP math opponents in our neighborhood have been carved out with almost surgical precision for reassignment.”

Parents concerned about this reassignment plan can check to see if they are affected here.

The district is taking online comments like they did during the Apex/Holly Springs reassignment debacle. Hundreds of responses are already logged under each of the ten school topic areas. Parents can voice their opinion in one of the forums here.

Public forum dates on the reassignment plan coming up include locations in Apex, Fuquay, and Raleigh, but none in Holly Springs, which is arguably being hardest hit. Here’s the list so far:

Bear in mind, this is for “feedback” and “questions” but given the board’s track record, this reassignment process is just a perfunctory fulfillment of notifying the public.

Here are the important upcoming Board meeting dates related to the reassignment plan:

Buried at the bottom of the reassignment feedback forum is a section that says the reassignment policy proposal “would change the calendar application schools – or “calendar option” schools – for a small number of families. We will be contacting these families directly.”

I’m guessing that families who had year-round who are now being forced to go traditional or vice versa are what this covers and the grandfathering rules are referred to in several comments.

One would be hard-pressed to find a Wake County that doesn’t have at least two trailers behind it which are being counted as permanent classroom space in school attendance headcounts.

Southern Wake is one area where the population has been steadily increasing and most schools have at least four trailers behind them, but this board has ignored it, focusing instead on growing magnet schools and building new schools in areas with less growth.

Despite the persistent trailer farms, enrollment in WCPSS schools has been slowing for the better part of the last three years. But surprise – at their October 1 meeting, the board is now paying attention to trailers.

It cannot go without mention that over the years, the school board has been notoriously bad at overestimating enrollment. (See here, here, here, here and here.)

The price for this incompetence is students being forcibly reassigned to compensate and Southern Wake families are seeing it play out in real-time yet again.

A prime example of student enrollment estimation and planning failure is White Oak Elementary in Holly Springs, which opened in 2016-17 had trailer put behind it a year later. During the work session meeting (video below), the board has White Oak’s base enrollment is already on the list for reassignment.

According to the presentation given to the board during the work session, nine elementary schools, 10 middle schools, and two high schools (Wakefield and Wake Forest) are being impacted in 2020-2021.

Watch below as the school board goes over the reassignment maps during their work session, focusing on Southern Wake County and their sudden interest in “crowding” in those schools.

Why The Public School Exodus Continues

Read about why 20% of families are no longer in public school system with a story about a family who was given the school assignment that they wanted only to have it snatched back by “the system.”

Read Former House member J. Russell Capps’ barn burner, Will our public schools sink the ship? wherein he lights up both Union County and Wake County schools over an unhinged politically biased teacher and social justice activism in the classroom.

A.P. Dillon is a freelance journalist and is currently writing at The North State Journal. She resides in the Triangle area of North Carolina. Find her on Twitter: @APDillon_
View all posts by A.P. Dillon →
This entry was posted in A.P. Dillon (LL1885), Big Ed Complex, EDUCATION, Wake County School Board and tagged Busing, Reassignment, WCPSS. Bookmark the permalink.
Loading Comments...