Where was the Teacher during the Brutal Beating of a Wakefield High Student? #WCPSS

Less than a week ago, a mom posted on social media about the brutal beating of her son at a Wake County High School. The perpetrator only received a 5-day suspension and has apologized, but I seem to be the only one asking: Where was the teacher during this beating?

Ashley Williams-Marble took to Facebook on October 21st to describe an assault on her son that happened on the campus of Wakefield High School in the Wake County Public School district.  An excerpt from her post:

Last week my son, who is a Junior at Wakefield High School, was physically assaulted while playing basketball in gym class. I actually should say sucker beaten, because he was attacked from behind. Punched in the head, & face multiple times. Attacked so hard he was knocked out, blacked out, & his nose broken in 5 places. 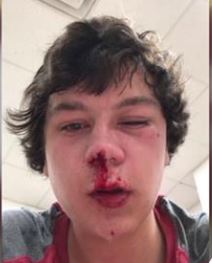 I got the call mid morning from the school telling me I needed to come right away. I was met at the front door, and ushered to the back. I will spare you the drama, details, & bloody pictures, but I can tell you my heart was broken in a bazillion pieces. Seeing my son in this condition, and not being able to take away his excruciating physical pain was a very helpless feeling. His precious little nose was so damaged, his left eye was swelling shut, there was blood everywhere on him, but the scariest part was the fear in his eyes. (I will get back to this later).

At the hospital, after many tests, and CT scans we discovered he had a concussion, facial contusions, & his nose was broken in 5 places. The next two days were filled with visits to specialists, multiple visits to urgent care, sleepless nights, more X-RAYs, throwing up from pain, lung problems, & severe coughing.

The post goes on to say that surgery was necessary to repair the damage to her son’s nose.

The attacker has not been named as they are 15 years old or under, but sources close to the story have told me the name of this person and have verified this young man was bragging after the incident on Snap Chat about his suspension being ‘some fun time off’.

According to Keung Hui at The News and Observer, the “Raleigh Police have taken out a juvenile petition against the 15-year-old Wakefield High student accused of assaulting the student mentioned in mom’s viral Facebook post.”

I’ve requested a copy of this incident report from the Raleigh Police, but no one has responded to that request yet.

I asked Wake County Schools on Twitter to confirm or deny that the student who attacked Mrs. Williams-Marble’s son was one of many minority students who is bused to Wakefield High for diversity and Free and Reduced lunch quotas.  Wake County has yet to respond.

Wakefield High’s principal did send a letter to Williams-Marble, calling the vicious beating an “isolated incident.” 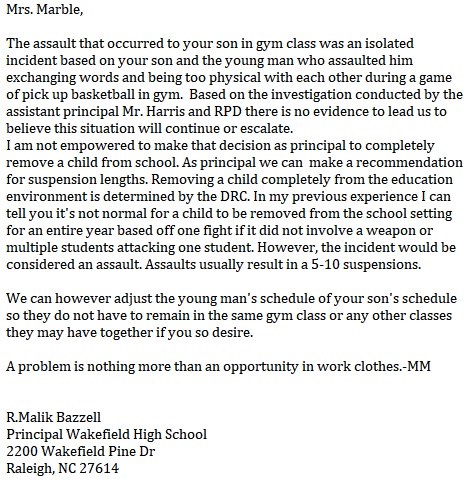 Where was the teacher?

A second letter was sent by Bazzell to all parents at Wakefield High which said in part that “Our staff works diligently and competently to address any such act or threat. I am confident in their collective ability to do so. We have many measures in place to discourage violence in our school so that we are a safe school.”

So far, no one other than myself – not even the parents of the student beaten – has asked a very important question: Where was the teacher during this violent beating?

An apology letter for breaking a kid's nose in 5 places requiring surgery is accepted by the family of the student who was beaten.

Not once has this question been asked:

“The schools have to have some responsibility in protecting our kids. I think it begins with punishment for more than five days out of school. This child should not be allowed back to school,” Ashley Williams-Marble told ABC11.

Many people were shocked this student was not expelled, but Wake County’s policy, titled “Guiding Principles: A Resource Guide for Improving School Climate and Discipline,” is a result of Obama-era discipline guidelines.

The Wake County “Guiding Principles” are a result of the Obama Discipline guidelines which in turn are based on the “school to prison pipeline” narrative.

I’ve written about Wake County’s fight problems before when in 2015, local media outlet WRAL reported that “since the beginning of the school year, Raleigh Police have responded to 209 fight calls at the city’s eight high schools.”

Given that the vast majority of Wake County High Schools run on a traditional calendar schedule and when school began in August, that  209 number translates to roughly about eight weeks of school at the time of the WRAL report.

Going one step further, that 209 fight call statistic breaks down to about 26.5 fights a week Raleigh Police responded to.

Flash forward to 2018 and the release of the 2016-17 NC School Crime report. In that report, assault resulting in serious injury increased from the prior year by 36 cases or 124.1%.

Apology Letter: “I didn’t realize my own strength.”

Since this beating has gained traction in the media and with parents, in particular, the student who attacked Williams-Marble’s son has written an apology note. The image below is via ABC11:

While most parents would be lawyering up and filing charges, Mrs. Williams-Marble has apparently forgiven the other student.  The image below is also via ABC11. 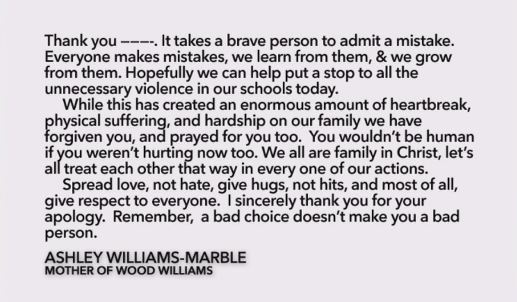 A.P. Dillon is a reporter currently writing at The North State Journal. She resides in the Triangle area of North Carolina. Find her on Twitter: @APDillon_ Tips: APDillon@Protonmail.com
View all posts by A.P. Dillon →
This entry was posted in A.P. Dillon (LL1885), CRIME, EDUCATION, Wake County School Board and tagged WCPSS. Bookmark the permalink.

2 Responses to Where was the Teacher during the Brutal Beating of a Wakefield High Student? #WCPSS