#WCPSS Board Pension for Supt Runs Afoul of State Law; May Cost Taxpayers over $350k 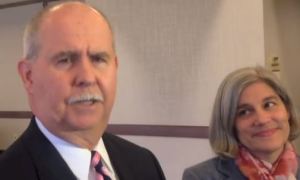 The Wake County School Board is yet again putting the county’s taxpayers over a barrel.

This time the board is facing a self-created problem due to lack of planning:
Former Superintendent Jim Merrill’s excessive pension of $180,036 per year.

But wait, the Wake school board’s latest screw up may end up costing taxpayers a LOT more than that.  What a clown show.

Read the opening paragraphs of this debacle at the News and Observer; emphasis added:

Former Wake County Schools Superintendent Jim Merrill’s retirement could cost county taxpayers an additional $350,000 as the school system fights the state over whether the pension was spiked.

Merrill, 67, retired as superintendent on March 1 and is now receiving a state pension of $180,036 a year, according to state records. The State Treasurer’s Office billed the Wake school system $351,992 to cover part of Merrill’s pension, saying it runs afoul of a state cap on how much it will pay in pensions for high-paid employees.

So, the Wake school board approved something they couldn’t afford or pay for? That’s what this says.  UNPOSSIBLE!

Wait, there’s more. WCPSS is refusing to pay because it’s not their fault the pension they  approved violates state law:

The Wake school system has refused to pay the bill, saying Merrill’s situation is not a case of inflating his pension as it neared retirement. Wake and several other school systems say the state’s pension spiking law is unfairly being applied.

Um, no.
What’s happening is the Wake School Board wrote a check bigger than their bank balance.

This is yet another example of what a nightmare this board is when it comes to finances and this far from this Board’s first fiscal fiasco.

The board also just approved a record $59.9 increase over their current budget, which is over $1.26 billion already.

This is ON TOP of the 1.2 BILLION dollar budget that @WCPSS Board already has and this is not the first time this has happened.

At what point do Wake taxpayers wake up?https://t.co/s0aQES1oRj#wcpss #nced

The Wake school system has refused to pay the bill, saying Merrill’s situation is not a case of inflating his pension as it neared retirement. Wake and several other school systems say the state’s pension spiking law is unfairly being applied.

For at least the last 5 years, the Wake County School Board has proven they know how to spend the taxpayer’s money on everything from “futurists” to hiring non-teaching staff that includes a radical Southern Poverty Law Center social justice warrior.

June 2014
WCPSS launches their new “vision” by putting on a public event featuring a “futurist” name David Houle who’s primary purpose seemed to be blowing sunshine up the rear ends of parents and promote more technology use in the classroom as well as Common Core. How much did this little event cost? $58,000.

April 2015
The Wake Board proposes a $1.4 billion dollar budget. This budget proposal was 14% larger than the previous year’s. Superintendent Jim Merrill said $48.3 million was needed to ‘keep up with enrollment growth’.

October 2015
The Wake County Board of Commissioners gives the Wake School Board almost what they asked for, with an additional $44 million, but it’s not to ‘keep up with enrollment growth’.

When the document used to assess Merrill’s performance which was the basis for his bonus was asked for Wake County Schools attorney refused to turn it over to both the News and Observer and to me.

I asked for the goals document and the lawyers for WCPSS told me it was part of his personnel file and therefore I could not have it.
Those goals dictate where tax dollars go.
This is bureaucratic ass-covering of the worst kind.#wcpss #nced

The reason given was it was ‘part of his personnel file’ and therefore off limits. That is a BS answer from Wake County because that document dictated how taxpayer money was spent. The people have a right to see it.

February 2016
It’s an election year and the Wake County School Board decides to leave a poison pill for the potential new incoming board.

The school board amended Superintendent Merrill’s contract and gave him up to two years of severance pay (over $560,000) if he’s fired from his contract early. Now, it stands to reason that the only purpose for the board making that amendment is if people were unhappy with the job Merrill was doing. Yet there he was getting bonuses based on goals no one was allowed to see.

April 2016
Since 2013-2014, Wake County School Board has been responsible for exponential tax hikes just between bonds and salary increases alone.

In April of 2016, Wake County School Board tossed out the idea that they want to propose yet another bond — an $850 million dollar one.  In 2013, an $810 million dollar bond was passed and a mere three years later the board now wanted an even bigger bond.

Remember, what the Wake Board and Supt. Merrill was basing their monetary requests on ‘student population growth’ and ‘maintaining levels of service’ yet year after year, it’s been proven the board has been dead wrong about enrollment increases.

July 2016
Superintendent Merrill sends out an email detailing cuts to school level services in order to ‘close the $17.5 million dollar budget gap’ while simultaneously indicating a 3% pay raise and a half percent bonus for non-teaching support staff. That 3% works out to be $2.9 million dollars.

Just a month or so earlier, the Wake Board also approved a $1.98 billion building program that would span the next 7 years.  The nearly two million dollar expansion was alleged to ‘accommodate the student growth rate’ which the board has inaccurately estimated in the past.

August 2016
Despite the large $1.4 billion dollar budget ask, WCPSS’s board claims budget gap of around $17.5 million yet at this time decides to purchase a car dealership’s property near downtown Raleigh to the tune of over $6.3 million dollars.  The full amount actually turns out to be $6,351,695 and the property is being eyed for a high school campus.

Remember, according to their own previous $1.98 billion dollar building plan, downtown is not an area that needs another high school, the surrounding suburbs to the North and, in particular, to the South are where the need is.

October 2016
The Wake Board still has a big, fat budget shortfall but decides to fill a long-time vacant tech position with a salary of $139,000 a year.

April 2018
It’s Groundhog day for Wake County taxpayers. The Wake School Board wants more money again. This time, it’s $58 million more on top of their $1.26 billion dollar budget. That’s right, interim Supt. Del Burns was asking for a proposed $1.7 billion operating budget for the 2018-19 school year that included a request of $489.8 million from the county.

The same month, Wake County Schools hires a social justice warrior and a white guilt obsessed woman into the “Office of Diversity Affairs” they started several years back.

White Guilt obsessed Teresa Bunner was hired to be the “Director of Equity Affairs” with a salary of $87,120.00.

Lauryn Mascarenaz, the Southern Poverty Law Center hack, has been hired to be the  “Director of Equity Affairs for Coaching and Leadership.” Her salary is $85,000.00.

Won’t somebody $top this board?

Or at least request an audit?   I’ve asked for the WCPSS line-item spending multiple times over the years. I’m not talking about the public line item budget either. I asked for the deep detailed spending – every pencil, every contract, every thumbtack. The district has yet to turn over this information to me and after waiting two years, I gave up. I think that was their desired outcome.

Now, what I’ve posted here are just a few of the bigger hits in the last 3-4 years. Hopefully, people will remember some of this the next time they hear the Wake County Board asking for more money.