Get your coffee. Sit down. This is going to be a long but necessary article.

Let this set the tone:

Until parents stand up and push back, the infusion of social justice and indoctrination will continue to crowd out academics in our schools. I believe this plays a major role of why school choice, in particular, homeschooling, is booming.
– A.P. Dillon

Another Day Another SJW
If you want more proof of the kind of social justice warrior indoctrination going on in our schools, you have to look no further than Rod Powell of Mooresville high school.

Powell is a Common Core true believer that I’ve had various online debates with.

But I’m not talking about the fundamentally flawed Common Core today. I’m talking about an article Mr. Powell penned at EducationNC and it’s beyond appalling.

The article is titled, Great BBQ is not enough: A teacher and his students take on HB2.

What Mr. Powell did in the article was demonize the legislature and use kids to do it.

According to his article, he had the kids pick ‘media articles’ of their ‘own choosing’ to sit down and which they would use to discuss HB2 in class.  Anyone with even a single brain cell knows that the media has misrepresented HB2 from day one.

The use of articles that are inherently editorialized and slanted as discussion pieces was a slick way of making sure his students came away with the opinion Powell apparently holds on HB2. He doesn’t say it outright but the intent is clear — you’re a fear-mongering bigot if you back the bill.

It is unclear if the actual law, in its entirety, was given to them to read because the article says this:

We did a document deep dive and read the text of the law itself, carefully paraphrasing and addressing key vocabulary words.

“Document deep dive.” That’s Common Core “close reading” doublespeak for, ‘we’re going to read something with no context and form a biased opinion of it’.

Did Mr. Powell bother to perhaps try to have an actual legislator come talk to them? You know, get it from the horse’s mouth? Nah. They might mean hearing fact instead of media spin and “paraphrasing.”

Speaking of context, the article also doesn’t mention anything about the Charlotte ordinance, which was the cause of HB2 either.  It’s a safe bet Mr. Powell’s students were not given the ordinance to read. If they had been, maybe some of them would have understood that what Charlotte did was ban single-sex facilities of both public and private inside of the city limits. It also violated the state constitution and multiple decency and building laws.

I would be willing to bet not a single word about Title IX was spoken either. Can’t let the kids know that under Obama’s Title IX guidance, anyone can identify as anything. The ramifications of that are that anyone will have access to their choice of dorms, showers, locker rooms, sports teams, clubs, scholarships — you name it. Nothing is off the table. The students would do well to read the dissenting opinion from the 4th Circuit court of appeals on this topic.

What is clear from the article is that Mr. Powell made sure his students saw it his way. The ones who didn’t agree with him will eventually.

You see, Powell juxtaposed anonymous comments from students in his article and included a few who don’t like the idea of open bathrooms or showers. What the juxtaposition did, whether or not he realizes it, was to signal to those kids: I see you, bigots.

Seeing as media articles are a big thing for Mr. Powell in class. I’m sure his students will find this article of his, or perhaps he’s already shown it to them.  I’m sure those students who dissented will be made to care now that their teacher has effectively labeled them a bigot in print. Good going, Teach.

To the kids out there:

You’re not a bigot.

Anyone telling you that you are is substituting an emotional reaction because the facts don’t line up for them and labeling someone a nasty name is the fastest way to get you to shut up.

If you want the full picture, visit my Charlotte Ordinance/HB2 repository. Every related official document is there.

Distraction Heal Thyself
Powell distracts from the real reason HB2 was written, which is the Charlotte ordinance. He does mention one area that I mildly agree with, only in as much as I think HB2 should have been split into two bills:

But the bathroom issue really isn’t the story. Tucked away inside the inner workings of HB 2 are machinations that limit the rights and abilities of local governments to protect the rights of their citizens (such as protections against unsafe working conditions and unfair wage policies), devices that strip citizens of the right to sue in state courts for discriminatory employment practices, and guarantees that HB 2 will survive any attempt by higher courts to overturn it.

Our leaders have diverted attention away from the real issue by oversimplifying this uncommon biologically and physiologically complex issue and turning it into a bathroom circus.

Mr. Powell, you’re a teacher yet you seem unaware, or at least fail to mention, in your diatribe that municipalities in North Carolina derive their rule-making authority from the state? Kind of an important point that gives a different context to your objections in the passage above.

Local municipalities creating a patchwork of laws across the state is not only dumb, but it’s also counter-productive given there are federal and state laws already in place for such protections, not to mention the policies of individual companies.   In fact, HB2 allows private business to operate as they see fit instead of being dictated to as they were by the Charlotte ordinance.

As to diverting attention, Mr. Powell, I didn’t see you calling out President Obama for his ‘diverting’ when his DOJ and the Dept. of Ed sent their edict to school chiefs on the matter.

Has the problem been overblown by our legislators? I think so.

This bill is adding a crushing weight to the lack of confidence that our educators AND students are already feeling about our legislature.

‘Lack of confidence in the legislature’.  Oh brother. 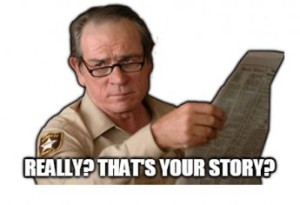 GEE.  It’s the legislature who is to blame when the top education officials in the state and in our districts are openly sending mixed messages and arguably just lying to the public about the situation?  What a confidence builder for students and staff?

When the President has his law enforcement and education officials ram ‘guidance’ down our throats,  it’s the Legislature who we should lack confidence in? Really?

The Scarlet B
The very next section is where his students can be sure that their teacher thinks they are a bigot if they disagree with him:

HB 2 plays on fear and intolerance for its support – two issues that schools in North Carolina are working to move beyond and that need no further inroads into our classrooms.

Got that, kids? This is what your teacher thinks about HB2, that it’s about fear and intolerance and you’re better than that. HB2’s not about your safety. It’s not about your right to privacy. It’s about legislators who dared to consider your safety and privacy and acted to protect you– they are the bigots. Wear your Scarlet B, kiddies.

Mr. Powell’s use of his students as foils for his personal opinions on HB2 is beyond appalling. It’s child abuse.  For the love of all that’s holy, have the guts to write about your own opinion.  Don’t use students as a writing tool to take potshots at the legislature and students who disagree with you.

Won’t Somebody Think About The Children!
This is the introduction to the section where he started to quote his students:

As could be expected, the comments of some students, in the reflection piece and class discussions, were crude and revolved around sexual innuendo.

The statement above is the tone-setter for the next few sentences Powell writes (typo included was in the original):

A 9th grade male – “You should use the bathroom for the equipment you got or not like on your your birth certificate.”

Some responses were reminiscent of the fears of sexual predation, rape, and assault expressed by some adults.

10th grade female – “This law increases the chances of perverts/rapists coming into the women’s room.”

12th grade female – “Dangerous ‘cause a guy can dress up as a woman and say I’m transgender and then go in the women’s restroom and take pictures of the girls and women in there.”

This section is followed by a second tone-setting statement, “Many questioned the implications and motivations behind HB 2.”  What followed are supposed to be the rational and intellectual responses.

Those responses mostly center around the theme that HB2 is discriminatory. Gee, I wonder where they got that idea, given their main source of discussion was biased and editorialized media articles?

Did these kids stop to think that the vast majority of people are being discriminated against for wanting the basic right to privacy in intimate spaces?

In that same general section of the article, on one hand, Powell seems to be making the case his kids are well-informed and worthy of taking on adult subjects.  Yet, on the other hand, where kids were concerned with their safety, their responses were deemed to be ‘reminiscent’ of opinions ‘expressed by some adults’.

In other words, Mr. Powell, not so subtly, makes sure the reader knows those kids are just mimicking what some adult said. Mr. Powell, ever consider those adults you mention are the student’s parents? Awkward.

Mr. Powell’s ability to try to manipulate the reader in his article is impressive. Now imagine that manipulation in his classroom.

Powell closes with one last parting shot at the legislature, again, using his students:

Our students are still forming opinions and views on our leaders, our government, and the adults in their lives.  Are the leaders of North Carolina providing guidance and appropriate role models?

This teacher says “no.”

My response to Mr. Powell is this:

Are the schools of North Carolina providing guidance and appropriate role models?

This parent says “no”.