Teacher pay in the state of North Carolina has continually risen for the last four years and the average has now surpassed $50,000 a year, not including benefits.

Recently released figures from the state Department of Public Instruction put the average salary for a North Carolina public school teacher at $51,214 this school year. That’s $1,245 more than the previous school year.

The $50,000 benchmark has been a major symbolic milestone, with Republican candidates having campaigned in 2016 about how that figure had already been reached. Democrats argued that the $50,000 mark hadn’t been reached yet and that Republicans hadn’t done enough, especially for highly experienced teachers.

The average teacher salary has risen 12 percent over the past five years, from $45,737 a year. Since taking control of the state legislature in 2011, Republicans raised the starting base salary for new teachers to $35,000 and gave raises to other teachers.
(Source: Courier-Tribune)

Some of the credit, as the article above notes, goes to the districts who jacked up their teacher supplement pay. 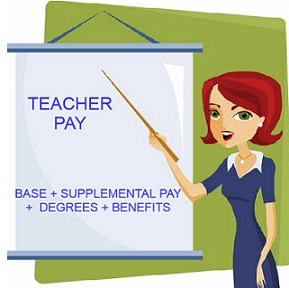 Every district has the option of including additional funds to teacher pay, called a supplement.

The bigger the district, the fatter the supplement usually. Wake County’s is the largest currently at $8,469.

Funnily enough, they stopped doing it around the same time former Superintendent June Atkinson started harping on teacher pay along with the outrage machines in the state.

I reconstructed that discontinued DPI report annually by hand using the DPI Statistical Reports.  For those who want to go look it up on their own, go to the NC Public Schools Website Data and reports, then click the link for Statistical Profile Online, then select State Summary > Public School Personnel > Chart 20.

Here are the top 5 districts for teacher pay supplements for 2018:

Expect them to throw lines like ‘But…But..pay adjusted for inflation!’ or employ some bizarre explanation that proves the struggle with Common Core math is real.

Don’t expect Democrats in the legislature to stop pouring gas on their self-created fire either, because if North Carolinians have learned anything over the last 4-5 years, it’s that enough is never enough.

No. They won't.
The only way the conversation can be civil is if Democrats control the #NCGA.#NCpol #NCed https://t.co/YotNPhA2Ey

Like what you read at LL1885?
Sign up for the Best Damn Weekly Newsletter EVAH.
Hit that Tip Jar!

A.P. Dillon is a freelance journalist and is currently writing at The North State Journal. She resides in the Triangle area of North Carolina. Find her on Twitter: @APDillon_
View all posts by A.P. Dillon →
This entry was posted in A.P. Dillon (LL1885), BlueprintNC, EDUCATION, NC Dems, POLITICS NC and tagged Aim Higher NC, NCAE, Progress NC, Teacher Pay. Bookmark the permalink.