Alongside the Hollywood useful idiots and astroturfed outrage over a bill that protects everyone in North Carolina, comes the lovely Twitter sock puppet accounts.

Here are just two I’ve come across in the last 24 hours.

Here is yet another #HB2Liars sock puppet Twitter account.
One follower. Created to troll the law. Pathetic. https://t.co/dZcVbwyqLt

The mute has come out for ==> @Harrin16Lindsey
Sad, pathetic sock puppet created to join the #HB2Liars pic.twitter.com/GMOoUpuJV6 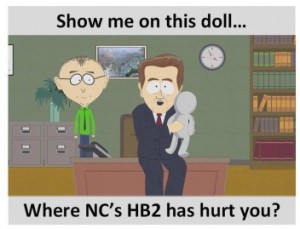 I suspect neither one of these Outrage Industry sock puppet accounts has read either document.

If they did, they either don’t understand either document or they are willfully lying.

Do your own experiment out there people. When someone screams ‘bigot’ at you or that the bill is “hateful” at you over HB 2, ask them specifically what’s wrong with the law.

When I say specific, ask them to cite the section of the law that has their panties in a wad. See what happens.

After their panties are in a wad, follow-up with asking them about the registered sex offender who was leading the fight for this ordinance.  Watch their head explode.

I’m gonna bet you a dollar at that point they turn around and fling the social media equivalent of poo at you instead of answering you.  They might even suggest you’re a whore or something:

SHUT UP and SIT DOWN, They explained…

This is the same type of coordinated bullying we saw go on in Indiana.  It is the same collection of useful idiots following the directions of the Human Rights Campaign.

They don’t want equality or freedom, this is about power and politics. They want to hammer any Republican within a 1,000 square mile radius who dares reject the social justice warrior agenda.

This isn’t about a law, which protects all NC citizens, allows private business to function as it wishes and protects school kids from the impending FedEd lawsuits.

No, this is about SHUT UP and SIT DOWN. Do it our way, or else.

This is about Shutuppery. It’s that simple.

Just like Hollywood Director, Rob Reiner, hasn’t read them either according to an editor’s note at the end of an  interview with Lt. Governor Forest in the Hollywood Reporter:

Editor’s note: THR asked Rob Reiner to respond to Forest’s assertion that he does not understand the law that he objects to and the filmmaker responded with the following statement: “This law is so discriminatory that Dow Chemical and I are on the same side. That ought to tell you something about how unjust it is.”

Mr. Reiner, here are the FACTS. Go read them, share them with your knee-jerk astroturf pals and then apologize to an entire state for being liars.

Liberal Hollywood at it’s finest. Speaking of Hollywood, there have been around 800 films or TV shows shot in North Carolina.

So out of curiosity, what was the last movie you shot in North Carolina Mr. Reiner?

Because I went through your directorial film list that goes back to 1974 and not a single one was shot in our state.

A.P. Dillon is a freelance journalist and is currently writing at The North State Journal. She resides in the Triangle area of North Carolina. Find her on Twitter: @APDillon_
View all posts by A.P. Dillon →
This entry was posted in LGBT, LL1885, NCGA, Pat McCrory, POLITICS NC, Shutuppery, The Articles, Useful Idiot, You Will Be Made To Care and tagged HB2, Liberal Hollywood, Rob Reiner, Shutuppery. Bookmark the permalink.