This installment of WCPSS Updates recaps several recent instances of inappropriate social justice activities that put student privacy at risk and have parents fuming. Parents are fed up and legal action may be on the horizon.

Also, information from the most recent board meeting and a long-overdue safety checkup for schools.

At least two schools in Wake County have been weaving in Social Justice and Social-emotional Learning (SEL) activities just in the first few weeks of school. One was in an Honors English class at Heritage High and another involves the entire student body at Apex Middle School.

Heritage High’s Melissa Wilson made students fill out a “Diversity Inventory” worksheet that asked extremely personal questions but also had students repeat their answers out loud for the whole class to hear.

The “Diversity Inventory” worksheet asked students to give information about their age, gender, race/ethnicity, sexuality, religion, and socioeconomic status for themselves, but also for their family or whomever they live with, their doctor, their elementary school peers, close friends, and teachers.

As pointed out in a blog post by NC Values Coalition, Wilson’s assignment is in violation of 20 U.S. Code § 1232h – Protection of Pupil Rights, subjection (b).

It was also confirmed in that blog post that Wilson had indeed been reprimanded for a similar incident in February of 2019. At that time, Heritage High Principal Scott Lyons had issued a letter to parents who complained which said that the teacher had been talked to and the lesson had been discontinued. Lyon’s letter also said that “the lesson has been used and is continued to be used at high schools throughout the district.”

Students in Wilson’s 2018-19 class reported that she had given students a Google survey created using Wake County resources. That survey was called “Man Enough?” and it asked questions about sexual orientation, gender, political affiliation and some disturbing questions about “toxic masculinity.”

Parents from Heritage High as well as concerned community members met with a Wake County staff member named Jeff Koweek, Director of Human Resources and Employee Relations. Koweek also served as the attorney for the State Board of Education.

Parents who were in attendance said the meeting was frustrating and that Koweek offered no recourse options, no information about where the worksheet originated and either refused to answer certain questions or claimed it was a “personnel matter” and could not answer.

When given a copy of Wilson’s sheet to complete, Koweek said: “I am not going to entertain that.”

Attendees said that Koweek offered no help or information on how parents could file a complaint, which is allegedly part of his job. In addition, Principal Lyons did not attend the meeting.

Ironically, Koweek was involved in the revision of the Staff-Student communications policy in 2018. The policy says staff are to communicate with students in a respectful manner that doesn’t violate board policy or any laws.

“The policy is trying to walk the line on what’s permissible and not duly restricting reasonable communications,” Jeff Koweek, a school district director of human resources, said in an interview with the News and Observer.

While the Staff-Student communications policy’s focus seems to be about preventing inappropriate sexual-related communications, the policy clearly states more broadly that “Employees are required to provide an atmosphere conducive to learning through consistently and fairly applied discipline and established and maintained professional boundaries.”

It is worth noting that according to Wake policy, Dr. Edward McFarland, the chief academic advancement officer, is listed as the responsible party for the type of complaint the parents have at Heritage High.

The entire student body has been instructed to engage in an activity called Cougar Connect which is also being referred to as “Circle time” or just “Circles.”

Parents were not told about “Circle Time” nor were permissions slips or any materials sent home for inspection.

“Circle Time” is scheduled to happen every single Monday for 30 minutes with students sitting in a literal circle. The students are then ‘welcomed’ to the space of the Circle then they are told to “pause, breathe and listen to the sound.”

According to the ‘rules’ for Circle Time, students are given a topic to discuss and only the person holding the “talking piece” is allowed to speak and rules say that information shared within the circle is supposed “stay in the circle.”

While the topics are not as immediately invasive as that of the Heritage High worksheets, students are being encouraged to share personal feelings, emotions and, in one session, to discuss their “values.”

According to parents I spoke with, Principal Monica Yllanes was hesitant to turn over the presentation associated with the activity. The first copy sent to the parents was missing a slide which had a hyperlink to a document called “Cougar Connect.”

The  “Cougar Connect” document details the rules of circle time and includes a long list of session topics and questions to be asked or considered.

After my initial report, a parent contacted me and said they were struck by how similar this activity seemed to be to Maoist discourse techniques and “thought reform” and ideological ‘remolding’ in China.

A commenter said that this kind of circle time activity was also occurring at Middle Creek High School. Parents at that school can feel free to email me at TheLL1885@gmail.com. Any emails I receive will remain confidential unless otherwise specified by the sender.

“The Florida-based School Safety Advocacy Council began visiting Wake schools on Tuesday as part of a $728,995 contract signed in July to do security risk assessments of all of the campuses,” reports Keung Hui at the News and Observer.

Let’s hope this outfit notices that there are children sitting exposed in trailer farms behind every single school. The Wake School board has counted trailers like they are official classroom space for as long as trailers have been in use – which is decades in many cases. That practice has got to stop.

Public comments begin around the 39:35 mak of the Board meeting video.

Parent Carrie Bley spoke out again about MVP math and begged the board to listen to the parents. Bley said they’ve sent the board “so many emails” and it “worries us that it doesn’t worry you.”

“We are dropping the ball on 6th, 7th, 8th-grade math. Teachers cannot stop talking about it,” said Bley.

Another parent, Emanuella Prister, gave the entire board a copy of the Heritage High worksheet and told them to do their homework. Referring to the homework, she said there is a common thread here and it is “radical ideology.”

“These are highly sensitive pieces of information that a teacher has no business asking of children,” said Prister, who asked the board members to answer the questions out loud just like the children at Heritage High had been asked in class.

Prister held up a print out of tweet from the Office of Equity Affairs that was promoting Howard Zinn.

“Zinn was an antisemite. He was no historian,” said Prister. “He’s radical and highly controversial.”

Prister added that she wants to the board to put it on the agenda for next time who is overseeing the Office of Equity Affairs (OEA) and who that office reports to.

“I said it 09/03/19 at the public hearing. The common thread here is indoctrination! “Multiplication is for white people?” Are you proud of your bigotry? We see your game plan: Making children ignorant so they gobble up your communist propaganda!’ said Prister in a tweet the following day.

Prister’s tweet includes a screenshot of a book list ‘curated’ by the Office of Equity Affairs for the express purpose to “disrupt inequities in your school community.’

The contact for this list is Lauryn Mascarenaz, a former employee of the Southern Poverty Law Center’s Teaching Tolerance organization.

According to teachers who attended the OEA’s ‘white privilege training and ‘Courageous Conversations’ conferences, many of these books were either suggested or required reading. 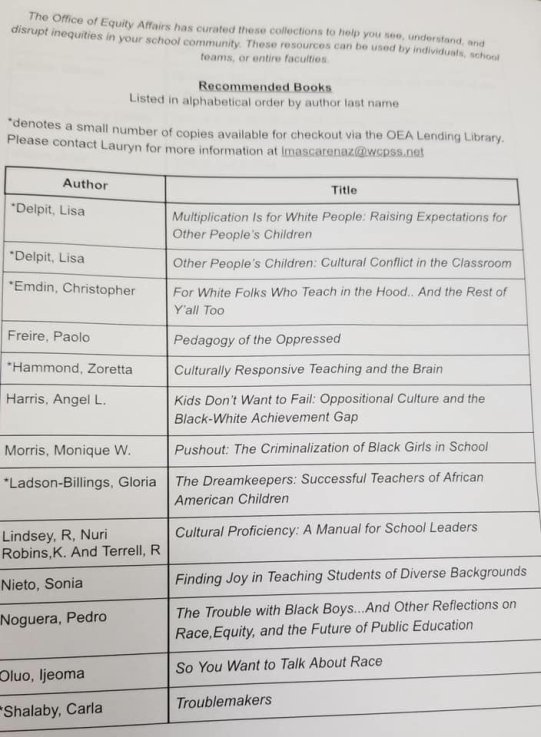 One of the books is Zaretta Hammond’s Culturally Responsive Teaching and the Brain, which I wrote about in August. The WCPSS Office of Equity Affairs spent $3,900 on a 2-day workshop that had the same name as her book.

Hammond’s work is similar to that of Glenn Singleton’s in that the main thrust is to blame white people for the failings of minority students. Both Hammond and Singleton’s theories are key elements in the OEA’s “Equity Framework” which will “leverage student voices” in the classroom.

The OEA’s “Equity Framework” focuses on training teachers to have an “action-oriented mindset” to push social and racial justice themes and activities in their classrooms.

Teachers are supposed to see “inequities wherever they are,” according to Rodney Trice, Director of the OEA in a presentation to the NC State Board of Education.

Trice went on to say we need to make sure these inequities are “disrupted wherever we see them,” and that the goal was to “see, understand, interrupt.”

The public should remember that the vote to implement a student enrollment and reassignment based on a “socioeconomic index” is rapidly approaching.

Read the particulars of the “socioeconomic index” by scrolling down this article to item number three.

The board has so far refused to identify how this enrollment/assignment change will be accomplished beyond uprooting and busing children all over the county.

Bear in mind the resolution that accompanied the decision to revamp the student enrollment policy:

Was this article useful to you?

A.P. Dillon is a reporter currently writing at The North State Journal. She resides in the Triangle area of North Carolina. Find her on Twitter: @APDillon_ Tips: APDillon@Protonmail.com
View all posts by A.P. Dillon →
This entry was posted in EDUCATION, Parental Rights, Wake County School Board and tagged School Safety, WCPSS. Bookmark the permalink.