Another NC Teacher Gets Plea Deal After Having Sex With A Student – Three Times.

Another North Carolina teacher has been convicted of sex crime-related charges but has received a lighter sentence due to entering a plea deal.

Last month a female middle school teacher was given 2 years probation as part of a plea deal after being charged with sexual assault of a 14-year-old boy. 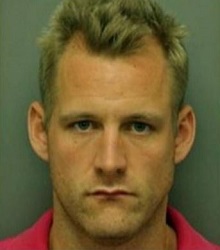 Devon Ross Lategan, now age 29, was charged with having sex with a student during the 2016 school year.  According to charging documents, Lategan had sex with a 17-year-old female student three times within one week in June of 2016.

Lategan had been arrested in Wake County and was released the same night after he posted a $50,000 secured bond.

Two years later, Lategan has accepted a plea deal and will only serve 45 days in prison. Due to his plea deal, the prison sentence he would have received, 13 to 23 months, was suspended.

This past week, Superior Court Judge Mark Powell sentenced Lategan to 45 days in the Henderson County Detention Center. Upon completion of that 45 days, Lategan will then have to complete 60 months of probation.

Lategan will also have to surrender all teacher licenses and register as a sex offender. Devon Ross Lategan has not shown up on the NC Teacher Licence Revocation list yet, however, the list has not been refreshed to include June reports yet.

At the time of his arrest in 2016, Lategan was teaching science at Wake County Magnet school, Athens Drive High.

Just prior to teaching at Athens High, Lategan taught at West Henderson High as an honors and AP Biology teacher.

Lategan abruptly resigned from Henderson County Public Schools on June 13, 2016, which is roughly around the same time the sex acts with his student occurred.

According to school officials in Henderson County, Lategan was allowed resign and did not indicate whether or not state education officials had been informed. Henderson School officials stated that the resignation was due to a “family relocation.”

A.P. Dillon is a freelance journalist and is currently writing at The North State Journal. She resides in the Triangle area of North Carolina. Find her on Twitter: @APDillon_
View all posts by A.P. Dillon →
This entry was posted in CRIME, EDUCATION, Quiet Epidemic and tagged Devon Ross Lategan, Quiet Epidemic, WCPSS. Bookmark the permalink.
%d bloggers like this: