Never have two words struck such despair in the hearts of parents and students. The majority of states adopted and implemented Common Core between three and five years ago.

Yes, my home state of North Carolina adopted and implemented Common Core too. The state is currently in year five of Common Core’s implementation, but you’d never know it from looking at test scores in the state which have been stagnant for years.

Education Week has a handy map denoting the status of Common Core across the country: 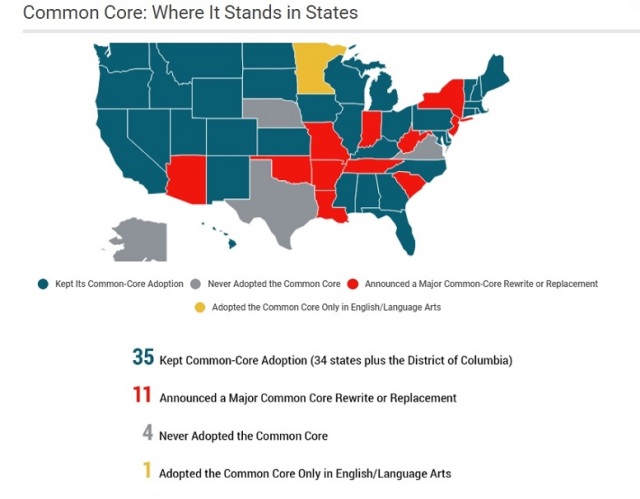 What strikes me is how little the public knows about the history of how North Carolina came to use Common Core, so I decided a history lesson was in order.

Bear in mind while reading the following timeline that in 2009, Arne Duncan was the Secretary of Education. That year he made a special trip to North Carolina and gave a speech at an NGA symposium hosted, in part, by the Jim Hunt Institute.

The main thrust of Duncan’s speech included peddling what would become the Race To The Top grant – provided the states complied with “four assurances“, one of which was to adopt ‘career and college ready standards’. Common Core: A North Carolina History

January 14, 2010
Superintendent Atkinson and Former Governor Perdue sign the Race to the Top Application. The North Carolina Department of Public Instruction’s complete Race To The Top application uses the Common Core State Standards by name as the standards the state will use to satisfy the ‘career and college ready’ requirement of the grant.

June 3, 2010
Superintendent Atkinson, Governor Perdue and the State Board of Education sign off on Smarter Balanced Assessment Consortium’s ‘Memorandum of Understanding’. This consortium, known as the SBAC, is one of two consortia created to carry out Common Core-aligned testing. The Memorandum is another layer locking NC into the Common Core. The NC Board of Education adopts Common Core at the behest of Dr. Atkinson.

Yes, you read that correctly — Common Core was released after North Carolina put Common Core into their Race to the Top grant application and adopted the standards.

Fall 2012
Common Core was implemented in North Carolina Schools (K-12). Teachers are only made aware they will be using Common Core only a few months before the start of the school year.

April 11, 2013
The North Carolina General Assembly, barraged by irate parent phone calls, cut the funding on the SBAC tests. This does not deter the Department of Public Instruction, who enters conducts an SBAC field test in half of North Carolina schools. To date, no one has
been able to answer how these field tests were paid for and no one has seen the results. 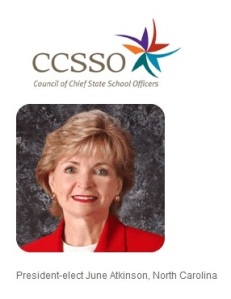 Fall 2013
North Carolina’s Superintendent, Dr. Atkinson, was made President-Elect of the CCSSO, one of the three groups who created the Common Core and holds the copyright on the standards. Local media fails to report on this connection.

2014 Highlights
The North Carolina General Assembly’s Common Core LRC produces a report which is critical of Common Core and suggests a replacement. A draft of this replacement bill was entered into the LRC report, authored by Senator Tillman. This draft becomes Senate Bill 812.

The House also created a bill, House Bill 1061. The language in 1061 was stronger; a tug of war ensued between the House and the Senate. Various groups including the NC Chamber of Commerce, who supports Common Core, launched an assault on 1061.

The conference version of Senate Bill 812 passed both houses after exiting a Conference Committee and was sent to Governor McCrory, who signed it on July 22nd, 2014.

August 2014
Appointments to the Academic Standards Review Commission (ASRC) were made.
Appointed to the ASRC (5 by Senate, 5 by House) were two current k-12 teachers 2 school board members, one retired math teacher, one district superintendent, one former Principal who is now a ‘project zone’ superintendent, one assistant principal, two NC State
Board of Education members. 1 businessman was appointed by Governor McCrory.

Despite multiple parents and experts applying, there were no early childhood experts or parents from the general public were chosen to serve on the commission.

Senate Appointments
These appointments were made by General Assembly Senator Phil Berger.

According to SB 812, the ASRC was expected to do a comprehensive review of the standards and give recommendations for changes to the State Board of Education by the end of December 2015.

ASRC MILESTONES
September was the first meeting and Co-Chairs were elected (Andre Peek and Jeannie Metcalf).

From day one, the commission fought and begged for their funding. This was a shameful series of events that dragged on for six months due to someone at the General Assembly putting the commission’s funding in with the controversial Coal Ash Bill. This lack
of funding kept the commission from bringing in speakers who might rebut the Common Core.

Two work groups were formed to review the Common Core and look for the most egregious issues. The Math team was led by Dr. Ted Scheik & English Language Arts was led by Dr. Laurie McCollum.

The first few meetings (Oct-Jan) were frustrating as the Dept of Public Instruction appeared to be running the show with lengthy presentations that were confusing and convoluted.

Tammy Covil was elected Co-Chair in February after Metcalf stepped down.

In late November 2015, information came to light that there was a group shadowing the work of the ASRC, but they had kept their meetings private. This shadow group was formed and led by education non-profit, BEST NC.

After about six months of work, the ASRC saw a consensus developing about the standards. Here is a summary of the issues that had been identified at that time:

1. A number of the standards in K-5 (both ELA and math) are age and developmentally inappropriate.
2. The integrated math used in Common Core in middle and high school is deficient.
3. There are better math standards out there than Common Core. Minnesota is being looked at for math and Texas for English.

There was a question as to why the gold standard for English (Massachusetts) was excluded.

2016
After pressure was brought to bear by various non-profits, the NC Chamber of Commerce, various Common Core advocates and the NC Department of Public Instruction, the ASRC scuttled their 15 months worth of work at their last and final meeting.

The General Assembly, displeased at the results of the ASRC, puts together House Bill 657.

The bill offers students a choice of traditional math or Common Core Integrated math.
The bill gets stuck in committee and does not emerge. The Legislature ends the current session and the bill is essentially killed.

At the same time that House Bill 657 was going on, the Department of Public Instruction was ‘revising’ the high school Common Core math, commonly known as Integrated Math. The revisions are mainly cosmetic.

The Department of Public Instruction also announced that they will be looking at the K-5 math, but not until 2017. This means the state’s youngest learners would be subjected to more age and developmentally inappropriate math ‘strategies’ for yet another school year,  jeopardizing the foundational math skills of these students.

Since announcing the K-5 revision plans, the Department of Public Instruction has said nothing more on the topic. Without a new set of K-5 standards, it will be Common Core again for the 2017-18 school year.

For more details on the ASRC or Common Core, visit my personal repository of NC Common Core related materials and articles.