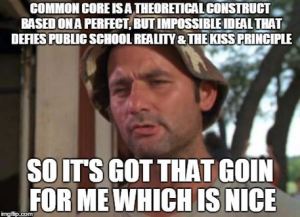 “My breaking point came with a math problem asking kids to combine Grover Cleveland’s electoral votes won in 1884, 1888 and 1892, a sum that would mean nothing to even the most obsessive presidential historian.

The publisher of that workbook, Pearson, also holds the state contract to design the tests , leading schools to adopt its workbooks to get a hoped-for edge .”
– NY Daily News, A mother’s Common Core breaking point: Why Cuomo is failing parents’ test

A.P. Dillon is a freelance journalist and is currently writing at The North State Journal. She resides in the Triangle area of North Carolina. Find her on Twitter: @APDillon_
View all posts by A.P. Dillon →
This entry was posted in Academic Standards Review Commission, Common Core, LL1885, Testing, The Articles, Twitter, Video and tagged ASRC, Common Core, Weekend Reads. Bookmark the permalink.