Sometimes, you have to laugh at the lack of self-awareness.

@LarryNilles Oh Mr. Nilles, that’s rich coming from you and the rhetoric you spew. It’s not false either. #ncpol

Hilarious coming from a union desiring, regular Moral Monday participant who seems to have a thing for socialism and teachers with a thing for occupying and socialism.

Reminder: The NCAE’s protest arm, Organize2020, and Nilles have the same goal — a union.

The tweet he’s complaining about – which is pretty much true if you realize the fact that Common Core teaches to the middle 40% and increases the gaps for special needs and low-income kids:

But Mr. Nilles is not concerned with facts on Common Core. The NCAE is one of the followers of the NC Chamber on Common Core who care more about producing workers than our children receiving a true education. No, Nilles is more concerned with rhetoric than the facts. Ginning up discontent —  That’s his job. Turning our schools into battlegrounds is the Nilles/NCAE hallmark.  I witnessed his handiwork first hand in my son’s backpack, as did many horrified and outraged parents around the state, remember? 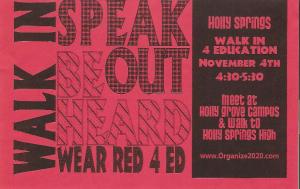 A.P. Dillon is a reporter currently writing at The North State Journal. She resides in the Triangle area of North Carolina. Find her on Twitter: @APDillon_ Tips: APDillon@Protonmail.com
View all posts by A.P. Dillon →
This entry was posted in Common Core, NCAE, Organize2020 and tagged Common Core, Hypocrisy. Bookmark the permalink.
Loading Comments...