Why Does Gov. McCrory Keep Listening to Eric Guckian?

Common Core is a fundamentally flawed experiment being performed on our students. Proponents have been unable or unwilling to defend the standards from real criticism ranging from the loss of local control, age and developmental inappropriateness to the intrusive data collecting to the fact it’s “higher standards” goal is to get kids into a “non-selective 2-year college”.

Yet, in the face of all the complaints, our Governor is still mooning over the standards:

RALEIGH — Gov. Pat McCrory said the Republican-driven bill to repeal the Common Core education standards “is not a smart move,” using his strongest language yet to warn against an effort pushed by conservatives in his own party.

“These are things we need to correct and recognize,” he said, citing concerns with implementation and testing in remarks at a Raleigh meeting of the N.C. Business Committee for Education, a group that supports the standards. “But again, you don’t just throw out the whole thing if you have some minor issues you need to fix. We are trying to get some of the language out of the current bills in which we toss the whole thing out with no replacement.” – N&O

With all due respect, Governor, I’m saying this as someone who voted for you and backs you but… BULLCRAP.

The article at N&O goes on to say the Governor hasn’t said he would veto it or not. Veto it and watch the moms descend on your mansion with bullhorns and signs and trust me — we won’t be accepting of cookies either.

Common Core is not just ‘one minor issue’ but a landslide of problems, the first and foremost being the standards are COPYRIGHTED.  We are at the mercy of two D.C. trade organizations to dictate what we do in our schools. Have you read Appendix B, Governor?  Have you read my open letter to you? If you have, re-read it because it clearly didn’t make a dent.

Read the whole story behind these “advisers” to McCrory:

If you’re unfamiliar with this information, it is likely because our media has not reported one peep about it. Nothing in the N&O/Charlotte Observer, who has served as a mouthpiece for the NC Chamber of Commerce on Common Core. Nothing in WRAL, who hypocritically mocks opposition through religion while promoting Moral Monday using the Bible as a podium. Nothing from ABC11 either.

Likely the NC Chamber is also buzzing in Governor Pat’s ear. Well, we know where they stand — ramming Common Core down our throats by using their money and influence to blackmail legislators.  We see the private-public partnerships out there, we see the digital learning alliances. We see this administration is very tight with the business community. That’s usually a good thing, however, with Common Core, it’s a train wreck of epic proportions which will have a lasting detrimental effect on our children and our state.

Common Core is not higher standards, it’s, in fact, a sub-basement start for academic achievement.  It does not do what it claims to nor can proponents prove it ever will.  Just the mere fact it usurps our control and state sovereignty over our own schools should make you think twice.

Wake up and smell the reality, Governor. 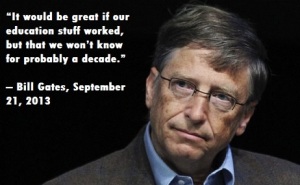 A.P. Dillon is a freelance journalist and is currently writing at The North State Journal. She resides in the Triangle area of North Carolina. Find her on Twitter: @APDillon_
View all posts by A.P. Dillon →
This entry was posted in Common Core, LL1885, NCGA, Pat McCrory, The Articles and tagged Eric Guckian, HB1061, Pat McCrory, SB812. Bookmark the permalink.

5 Responses to Why Does Gov. McCrory Keep Listening to Eric Guckian?