Yesterday in Raleigh, an NC Chamber (Update: See Part II) continued to wage war on the opponents to Common Core by holding a forum at Marbles Kids Museum. At this forum, speakers and guests included far Left leaning NC state Senator Stein, the Sr. VP of Strategic Initiatives for Alliance for Excellent Education, and a few teachers who made some rather unsettling claims about the Common Core. Several people from SAS were there, of course. Remember, SAS has a ton of money to gain from Common Core, yet their own Cary Academy doesn’t use it. Hypocrisy anyone?

The keynote speaker, Ms. Schneider, from Alliance for Excellent Education, Inc.? Her company has received $12,502,880 in grant money from the Gates Foundation. Of that over $12 million, $6,676, 370 was for pushing Common Core. The Gates Foundation has spent over $3 billion on initiatives and companies to create and push Common Core. These folks at this meeting are ultimately about money, not kids.

We’ll get to a bit about Allison Reid later. Ms. Rodgers is a former Assistant Principal of the Year and Muriel Summers was on the handpicked panel of educators at the NCGA Common Core Study committee’s 2nd meeting. That second meeting was supposed to be opposition, but instead we got a sham panel likely pushed into place by Dr. Atkinson. Summer’s speech made the ears bleed of everyone in the room. In a word or two, it was one long love letter to Common Core and like the Core, unsupported by an evidence or facts. Scroll down to part 13 in this article for more.

The original docket of presenters included the COO from Achieve, Inc. – one of the creators of Common Core. The only opposition was our Lt. Governor, Dan Forest. Good for him for getting there and representing the will of the people.

Please note, this is part one of two on this event. I have more coming.

Fun Fact: The US Chamber of Commerce held a forum on the same day and time. Coincidence? Nah. “Confronting the Myths: The Truth About Common Core” is the title. I laughed.

Senator Stein was sure to put in a politicizing word or two to the effect that anyone opposing the Common Core must be against the White House and the President. See how that works? He uses a false premise as fact and dodges answering any real questions of substance on the Common Core. Shutuppery! This is not Senator Stein’s first offense either – he’s pulled this stunt before. Ms. Pete spoke to him one on one where he basically gave her the Jedi hand wave when she questioned him.

@JoshStein_ no one against has mentioned The POTUS. You just said that’s why people are against.#tcot — Felice Perry Pete (@steelcurtaingal) May 21, 2014

Gee, look who followed me during their forum:

@NCChamber Ah, now you follow me? Want to answer who is funding “Hire Standards”? Care to release the documentation? #StopCommonCore #ncpol

Due to the scheduling of this event smack in the middle of a school week and in the early morning, I was unable to attend. However friend and Common Core opponent, Felice Pete, was able to be there. She tweeted out some of the comments being put forth and I have presented them below. 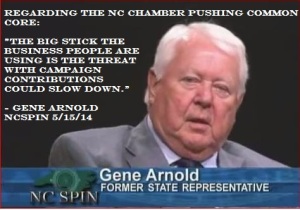 Reminder: The NC Chamber is going whole hog on Common Core to the degree they are blackmailing legislators with the threat of making their campaign contributions ‘go cold’.

TY for being there! RT @steelcurtaingal: @zanbunn I’m at a breakfast presented by the Chamber on #CommonCore.

These next three should be considered ridiculous positions by the teachers who were there touting the Core. How in the world did NC ever manage without the Core before? How in the world did our graduation rates keep climbing and however did our kids get into college? Common Core is not a magic bullet — it’s a magic dud.

The second one is worse. Common Core made her (Allison Reid) a better teacher? Um, come again? Is she saying she was a crappy teacher before? Hang on, we’ve been told over and over the Core is just standards. How are line item standards making her a better teacher? Is she saying it’s a method of teaching now? A curriculum?? These Core people can’t keep their messaging straight.

Oh wait… THAT Allison Reid. Forgot, she’s Wake County Teacher of the Year.   So, by her logic, did Common Core make her Teacher of the Year? Good grief.  The message being sent here is one of fear mongering. If you take away my Common Core, I’ll go back to being a mediocre teacher! Really?  Is Common Core your fairy Godmother sending you to the prom with glass slippers on?

The third is worse. What kind of honors English class has someone with a second grade reading level in it? Either Ms. Reid is dramatizing or something is seriously wrong with the school she’s at. Then again, Common Core is designed to make everyone go the same speed regardless.

Teachers #CommonCore allows students to think. Where they not thinking before? #twelfthplaceribbonwinners

Teacher Allison Reid has in her Honor English class a student reading at 2nd grade and others at college level. Why?

#CommonCore is math problems with words. It’s amazing we made it. No words in math. #Raleighef

A.P. Dillon is a freelance journalist and is currently writing at The North State Journal. She resides in the Triangle area of North Carolina. Find her on Twitter: @APDillon_
View all posts by A.P. Dillon →
This entry was posted in Common Core, LL1885, NCGA, Shutuppery, The Articles and tagged Achieve, Inc., Josh Stein, NC Chamber of Commerce. Bookmark the permalink.