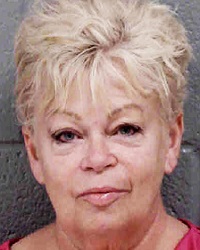 Sex with a student is a Class G felony with a sentence of 8 to 31 months.

Crimes against nature and indecent liberties with a student are Class I felonies, carrying a sentence of 3-12 months.

Ogle is the 52nd teacher arrest tracked by this website since January 1.

Ogle is listed as a career and technical education (CTE) health occupations teacher at Garinger high school. The district has indicated Ogle has been suspended with pay effective Oct. 31 pending the outcome of an internal investigation.

In the spring of 2019, Ogle allegedly began a relationship with a 17-year-old that became sexual during the summer months. Ogle was reported to a staff member of the school by that student just prior to her arrest in Huntersville. It is unclear at this point if the student was male or female.

This is the second arrest of a Garinger High School teacher this year.  In February, Tameisha Guthery, age 29, was charged with DWI and resisting an office by the state highway patrol in Charlotte after she crashed her car near the I-77 to I-85 ramp.

At the time, Guthery worked at Garinger High School and initially lied about that to officers and said she worked at Harding University High. Guthery also refused to give officers her real name. According to the highway patrol, the time of arrest Guthery became belligerent and another agency had to assist in escorting her into custody.

Guthery no longer appears on the staff directory list for Garinger High and according to state records, her North Carolina teaching license is still active.

A.P. Dillon is a freelance journalist and is currently writing at The North State Journal. She resides in the Triangle area of North Carolina. Find her on Twitter: @APDillon_
View all posts by A.P. Dillon →
This entry was posted in A.P. Dillon (LL1885), CRIME, EDUCATION, Quiet Epidemic and tagged CMS, Emma Neil Ogle, Quiet Epidemic. Bookmark the permalink.