North Carolina Public Schools has released the 2017-18 School Crime report. In it, serious offenses continue to be troublesome, including sex offenses nearly doubling. 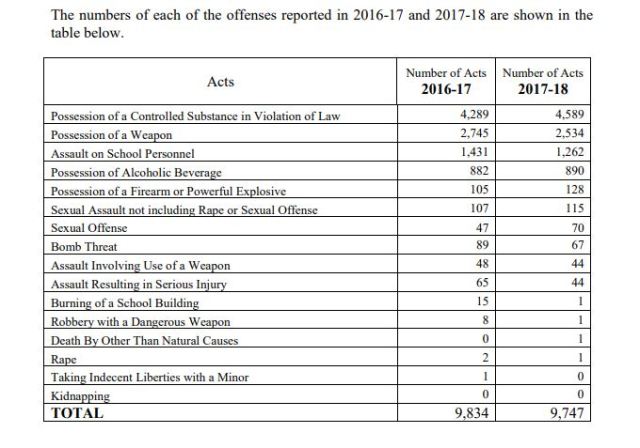 The report is based on “reportable crimes,” which means acts that should be reported to law enforcement. The State Board of Education defines and divides 16 reportable acts, but deems the first nine list below as ‘violent’.

Reportable Crimes for 2017-18 decreased by 87 or 1.6% decrease over the previous year. The overall decrease in reportable crimes for all grades was also 87, a drop of 0.9%. The overall crime rate decrease was 1.1%.

Most frequently committed by students who were ninth-graders, male and either black or Native American.

For a breakout of crime across grade levels click HERE.
For my article on last year’s school crime report click HERE.

A.P. Dillon is a reporter currently writing at The North State Journal. She resides in the Triangle area of North Carolina. Find her on Twitter: @APDillon_ Tips: APDillon@Protonmail.com
View all posts by A.P. Dillon →
This entry was posted in A.P. Dillon (LL1885), CRIME, EDUCATION, NC DPI. Bookmark the permalink.