Chris Anglin, the Fake Republican in the NC Supreme Court race turns out to have a very real arrest record. 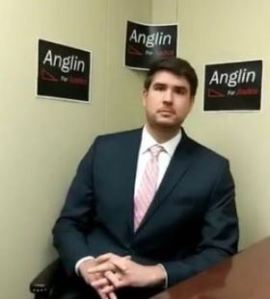 Anglin is the personal injury attorney who decided to change his party affiliation from Democrat to Republican a week or so before filing to run.

Anglin denies he is a plant but his campaign manager is long-time NC Democrat political operative, Perry Woods.

Both Woods and one of Governor Cooper’s top advisers, Ken Eudy, are Facebook pals with Anglin.

Anglin also scrubbed his law firm’s social media, but screenshots (left) are forever. His firm’s Facebook page was scrubbed too and someone deleted a video that was a hilariously bad ad for the firm. Don’t worry. I downloaded a copy.

You do the math. The guy’s a joke.

The News and Observer ran a story yesterday detailing NC Supreme Court candidate Chris Anglin’s criminal record. Apparently, the Fake Republican was quite the partier while at Elon Law school:

Anglin was pulled over in Greensboro in January 2009, around 1 a.m., and charged with driving while intoxicated. He was 23 and had a blood alcohol content of 0.14, nearly twice the legal limit. He pleaded guilty to the DWI in September of that year, and a few months later in December was charged with another crime — attempted breaking and entering. He later pleaded guilty to a lesser charge of second-degree trespassing in that case, which on Wednesday he also attributed to struggles with alcohol in his 20s.

In an interview after a judicial candidate forum in Charlotte Wednesday, Anglin said he was “incredibly intoxicated“ coming home from a party in Greensboro and tried to enter the wrong apartment, which led to the charges.

The News and Observer watered down that Anglin is really a Democrat, spent most of the article attacking the GOP for calling out Anglin’s previously undisclosed criminal record with zero comments from Anglin’s Democrat campaign manager.

One would have to be pretty daft to think The News and Observer didn’t know this tidbit and sat on it right up until early voting started.

Sitting on a story like this arguably puts the focus is back on Anglin and off radical Anita Earls, who was campaigning last week with Eric “kick them” Holder.

1. He’s a Democrat who switched parties just before filing.
2. No comment from his Democrat campaign manager Perry Woods?
3. How long was this story sat on?#ncpol @PeteKaliner @sistertoldjah https://t.co/CiRMb5Mlyp

Anglin spinning his DWI and breaking and entering as ‘ addition experience’ he can bring to the court is not only insulting, it’s some truly incredible spin.

Just to state the obvious…
If Anglin believed his arrests would "actually be helpful to bring to the court, since he has a first-hand understanding of addiction," he would have made it part of his campaign.#NCpol #NCGA https://t.co/r8Xnbuk8P8

Do you want an Eric Holder Disciple who is a Social Justice Warrior with a law degree or Barbara Jackson –  a sitting Justice with six years of experience under her belt?

I'll be voting for the incumbent sitting Justice, Barbara Jackson and not Anita Earls, who is an SJW with a law degree & disciple of Eric "Kick them" Holder. https://t.co/jxws0PNa99 #ncpol pic.twitter.com/BWdAxOOhLk

A.P. Dillon is a reporter currently writing at The North State Journal. She resides in the Triangle area of North Carolina. Find her on Twitter: @APDillon_ Tips: APDillon@Protonmail.com
View all posts by A.P. Dillon →
This entry was posted in A.P. Dillon (LL1885), ELECTIONS, POLITICS NC and tagged NC Supreme Court. Bookmark the permalink.