The NC Rape Kit backlog, which according to Roy Cooper in 2016 was not supposed to exist anymore, is back in the news.  The state’s attorney general took a break from blocking media records requests and held a press conference about the backlog last week. 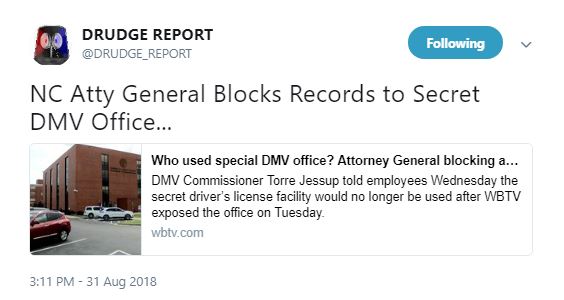 Roy Cooper told us in 2016 that this backlog was fixed.
It's now 2018.
Josh Stein is trying to make this look like a parade by getting out in front of the crowd.

Since 2003, when Roy Cooper was Attorney General, he’s been claiming he’s been on top of clearing the backlog of sexual assault kits across the state.

Noelle Talley, who is now a Deputy Communications Director for Governor Cooper was Cooper’s Department of Justice spokeswoman in 2016. She told WRAL in 2016 that  “There’s no backlog figure because there is no backlog.”

WRAL fact-checked a TV Ad used by Cooper while running for Governor in 2016.  The key claim they looked at was this one:

“When I became attorney general, we discovered a backlog of more than 5,000 DNA test kits and years worth of shoddy investigations,” Cooper acknowledges. “But what Gov. McCrory isn’t telling you is that we cleared the backlog. We also solved over 2,000 crimes and put killers and rapists in prison from cold cases. We fixed the problems at the crime lab.”

WRAL’s fact check on this Cooper claim earned him a “Red Light” rating, which means it’s a false claim. The ad, called “The Truth,” was scrubbed from Cooper’s YouTube channel.

Since winning the Governorship, not a single media outlet has revisited Roy Cooper’s claims of having ‘cleared the backlog’.

Josh Stein since assuming the role of Cooper’s old job, has attempted to deflect his responsibility for it and that of his predecessor onto the legislature.

NC has a massive backlog of untested sexual assault evidence collection kits. Each victim deserves to have his or her kit tested. That requires resources. Unfortunately, the legislature failed to provide any. https://t.co/VparVQAAOF

Despite the openly biased assist from the Charlotte Observer editorial board, Stein’s attempt to shift the blame went over very poorly and earned a swift smackdown from top Republican women:

“Under Democratic and Republican budgets dating back to the 2003-04 budget, state taxpayer money was set aside to test these rape kits. And it is unconscionable that during his sixteen years as attorney general, Gov. Cooper not only failed to heed the pleas of rape victims like the woman who said the untested kits were ‘the next stab in my heart’, but then lied to the people of North Carolina and said he had fixed the problem.

According to EndTheBacklog, North Carolina has the largest number of untested rape kits in the country with over 15,000. The only other state that comes close is Georgia with over 10,000.

Diving deeper into that 15,000 number

AG Stein’s press release on the new federal grant money included a couple of links at the bottom. One of which was to the report that was provided to the legislature.

As it turns out, that report includes information that puts the untested rape kit backlog higher than the over 15,000 Stein has been claiming.

Here are the key sections of the NC DOJ report with the page number included:

Police Departments or entities not reporting in alphabetical order:

Backlogs in the Hundreds and Thousands

So which law enforcement agencies have the biggest backlogs? Durham had the most with 1,711, followed by Raleigh at 1,428 and Winston Salem with 1,339.

A.P. Dillon is a freelance journalist and is currently writing at The North State Journal. She resides in the Triangle area of North Carolina. Find her on Twitter: @APDillon_
View all posts by A.P. Dillon →
This entry was posted in A.P. Dillon (LL1885), CRIME, Media Bias, POLITICS NC, Roy Cooper and tagged Josh Stein, Roy Cooper. Bookmark the permalink.
Loading Comments...