A Cherokee Public Schools teacher has been arrested on five felony counts involving sexual activity with a student. 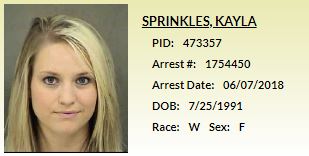 Kayla Alayne Sprinkles, age 26 of Hayesville, North Carolina has been charged with five felony counts of having sex act with a student.

The dates that the activity allegedly took place are from December 2016 to sometime in April 2017.

Allegedly, Sprinkles initially fled after learning a Grand Jury had brought charges against her, but then later turned herself in to the Mecklenburg County Detention Center.

Sprinkles was released on a $25,000 unsecured bond and her next court date is July 2nd.

Andrews High School has not issued a statement. It is unknown if Sprinkles has resigned or has been terminated.

A.P. Dillon is a reporter currently writing at The North State Journal. She resides in the Triangle area of North Carolina. Find her on Twitter: @APDillon_ Tips: APDillon@Protonmail.com
View all posts by A.P. Dillon →
This entry was posted in A.P. Dillon (LL1885), CRIME, EDUCATION, Quiet Epidemic. Bookmark the permalink.