Durham is out of control. OUT. OF. CONTROL.

The same DA who let the Durham commies get away with destroying public property is offering this guy a “restorative justice” plea deal. 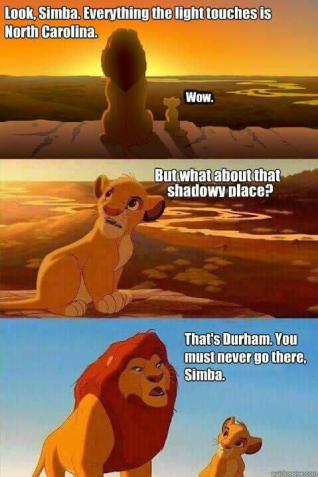 Media mostly left out that Berish is a repeat offender. ABC11 did catch it and it’s included in the video segment with their article on this plea deal.

ABC11 included in that video segment that Berish has other court dates scheduled in conjunction with violating his parole including assault on a female.

In  May of 2016, Berish was charged with speeding and failure to wear a seatbelt.

The year before that, he was charged with “Defrauding an Innkeeper” and misdemeanor conspiracy.

The defrauding an innkeeper charge is usually something like eating somewhere and skipping on the check.

(NCGS § 14-110) No person shall, with intent to defraud, obtain food, lodging, or other accommodations at a hotel, inn, boardinghouse, eating house, or campground. Whoever violates this section shall be guilty of a Class 2 misdemeanor.

What does this “restorative justice” entail?

According to the media reports, Berish had dinner with the family of the victim, asked for forgiveness, gave an apology and then the family gave the man who shot their daughter and fled the scene a bunch of art supplies.

I KID YOU NOT.

According to District Attorney Roger Echols, Berish’s case has been handled through the a restorative justice process, which is designed to bring together the victim and the person charged in the crime to create a space to discuss an incident and come to an agreement on how a perpetrator can take responsibility for their actions.

According to Echols, Medina’s family met multiple times with Berish, who read an apology and asked for forgiveness.

Echols said Medina and her family offered forgiveness and Berish presented Medina with a gift of art supplies before they shared a meal as part of the program.

As part of the restorative justice process, Berish will plead guilty to all charges Thursday morning and will be required to speak at gun safety and awareness programs, Echols said.

Berish’s case is the first violent felony to be put through a restorative justice program before train in North Carolina. (WRAL)

I can only imagine this girl’s horror at sitting across the table from the man who shot her in the abdomen. This family is as nuts as the District Attorney.

This is the same kind of crap they tried in multiple school districts which what a total disaster.

Why? Maybe because the kids figured out they could do whatever they wanted to with zero consequences beyond a having to do a group hug. The same premise applies here.

This is the same Durham District Attorney who failed to prosecute most of the Communists who destroyed a Confederate statute that stood… wait for it… in front of the Durham Courthouse.

It’s also the same DA who is facing a challenger who has been accused of plagiarism on her campaign website and is endorsed by a socialist organization.

I’ll say it again, Durham is out of control.

A.P. Dillon is a reporter currently writing at The North State Journal. She resides in the Triangle area of North Carolina. Find her on Twitter: @APDillon_ Tips: APDillon@Protonmail.com
View all posts by A.P. Dillon →
This entry was posted in A.P. Dillon (LL1885), CRIME, POLITICS NC, Racial Justice and tagged Durham. Bookmark the permalink.
Loading Comments...