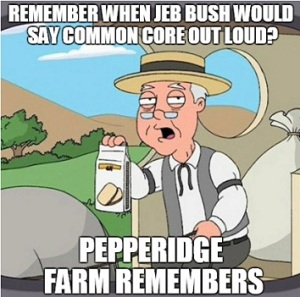 Jeb Bush and his Foundation for Excellence in Education have been one of the loudest proponents on Common Core.

Bush made statements about the testing and about opposing Federal involvement. This is pure double-speak.

SBAC and PARCC are the Common Core tests and they are indeed assessments done ‘in a certain way’ as chosen and directed by the U.S. Department of Education.

“I am for higher standards,” Bush said, declining to utter the politically charged phrase himself, but dispelling some of the more outlandish misconceptions about the program. “I am for creating real restrictions on the federal government’s role in this so you can alleviate people’s fears that you’re going to have some kind of control by the federal government of content, of curriculum, or even standards. I’m against all that.”

“I’m against the federal government being involved in demanding that assessments are done in a certain way,” he added.

Politico: Jeb Bush: Not Running From Common Core, But Not Saying It Either

Is he trying to reframe the discussion about the term, Bush was asked by a reporter?

“No,” he responded after an educational summit headlined by the former governor headlined here.

Was he toning down his rhetoric, considering how anathema Common Core is to some conservatives in Iowa, an early vote state?

“I’m for higher standards. And I’m for creating real restrictions of the federal government’s role in this,” Bush said.

*Sure* Saw the polling data, freaked out. Chris Christie: ‘I Have Grave Concerns’ About Common Core http://t.co/hJ9SRMMm2x #StopCommonCore

A.P. Dillon is a freelance journalist and is currently writing at The North State Journal. She resides in the Triangle area of North Carolina. Find her on Twitter: @APDillon_
View all posts by A.P. Dillon →
This entry was posted in Common Core, ELECTIONS and tagged Election 2016, Jeb Bush, PARCC, SBAC. Bookmark the permalink.