All Due Respect, Common Core Has To Go

Of course everyone wants high standards. This is why we oppose Common Core.

“The biggest fallacy of the Common Core standards is that they have been sold to the nation without any evidence that they will accomplish what their boosters claim.”  – Diane Ravitch

All due respect to John Locke Foundation’s President, John Hood, but his latest article on Common Core is really a rather depressing pat on the back to the English Language standards and likely setting ablaze the hair of parents like me reading it.  The rest of the article kind of hangs on this premise in this paragraph:

“The result was Common Core State Standards in language arts and mathematics. For many states, including North Carolina, the language-arts standards were clearer and more rigorous than the state-developed standards they would replace. With regard to math, however, the verdict isn’t so clear. Some states, again including North Carolina, had such weak math standards that Common Core is an improvement. But other states, including high-performing Massachusetts, are taking a step down by adopting Common Core.”

No. Neither the Common Core Math nor English standards are clearer or more rigorous. What proponents call rigor is actually age/developmentally inappropriate tasking. The Math sets our kids back a minimum of two years and ham-strings STEM path kids.  They are fundamentally flawed, untested and were written by a cadre of folks who either have never set foot in a classroom or the last time they did people were wearing bell-bottoms and dancing to disco. Add to that to the fact there is no empirical evidence Common Core is superior nor any evidence national standards are the way to go. As to the testing being too easy – take it up with the Department of Public instruction who keeps changing the scaling, messing with cut scores and other monkey business.

Comments like the one in Carolina Journal article come from one place. Fordham Institute. Common Core opponents need to stop repeating the falsehoods put forth by the Gates funded Fordham ‘Grading Report’. It’s been debunked and criticized by multiple states and the conflict of interest in how the ‘Grading Report’ was funded makes the results questionable at best.

Here is a must read on how one of Fordham’s own representatives admits NC standards were better:  “Indiana, Massachusetts, North Carolina, and Tennessee have better standards than CC.”

How About We Take A Look At Those NC Proponents? 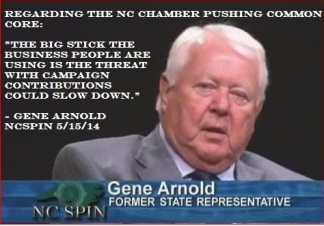 Given John Hood was sitting next to Gene Arnold on NCSPIN this past weekend, I would hope he’d write about that incredible admission Arnold made about the chamber basically blackmailing legislators in order to keep Common Core.

A Bit About The Evolution of Common Core

To say the Common Core was not forced on the states by the federal government is a true statement if you’re reading it literally. The reality is there was significant carrot dangling by the Department of Education behind the scenes on this. That coercion is continuing – just look at the President’s budget proposal.

Common Core went through multiple versions before it became known as such. The Jim Hunt Institute had a heavy hand in it along with the Bill and Melinda Gates foundation. Be aware, one outlet estimated Gates pumped 2.3 billion into ‘Career and College Ready’; I pulled down all the numbers from their grant site. it’s more like $3 billion.

These two primary groups, Hunt and Gates, wanted to get this into the states almost a decade ago but couldn’t do so via a government program; the public was already in fits over government intervention in our schools at that time. Enter the CCSSO and the NGA. These two D.C. trade groups then became the vehicle to push the standards. Gate’s funded pet project, Achieve, Inc., was then teamed up with them. Then Obama administration stimulus came along which had a large portion siphoned off for Race To The Top (RTTT).  Arne Duncan then locked arms with the CCSSO, NGA and Achieve and pushed ‘career and college ready’ requirements in the RTTT grant.

The powers that be in Washington D.C. and the creators of Common Core are attempting to ensure no one gets out alive. Common Core is anything but “state-led”. It’s Gates-led and Fed-led.

A.P. Dillon is a freelance journalist and is currently writing at The North State Journal. She resides in the Triangle area of North Carolina. Find her on Twitter: @APDillon_
View all posts by A.P. Dillon →
This entry was posted in A.P. Dillon (LL1885), Common Core and tagged Common Core, HB1061. Bookmark the permalink.
Loading Comments...