How reporting all facets of current events matters

It has long been the habit of North Carolina media outlets to report stories that cite seemingly random people, and in particular, activists, without telling the audience any background or details about that person or activist.

It’s been a long-standing habit of mine to fill in those reporting gaps because reporting on all facets of current events and it matters.  What follows is a juxtaposition of two such stories.

I’m not the only one who sees this and it’s not just North Carolina media. All media do this to an extent. Some of it is about brevity, but in many cases, it is about crafting and maintaining a particular narrative.

Clyde Cooper’s BBQ is a Raleigh landmark institution. In my 24 years of living here, I have never seen them speak out like this, but who can blame her after hearing the Raleigh Police Chief say this:

“I will not put an officer in harms way to protect the property inside of a building,” says the Raleigh Police Chief. pic.twitter.com/r7UghPpVVv

The owner, Debbie Holt, told ABC 11 how they called 911 during the riots last weekend to report fires being set in businesses near her own restaurant. No help was received:

“You know you’ve got no protection with your city, for your city,” Debbie Holt said. In her unmistakable Southern accent, the Clyde Cooper’s proprietor is as angry as we’ve ever seen her. Where she’s from, the word ‘ill’ means ‘mad.’ And the chaos from over the weekend has Holt running a fever: “Oh, I’m ill as hell.”

“We all own this,” said Police Chief Cassandra Deck-Brown, who at one point chastised the media for documenting destruction and looting on video this week, while not doing enough to stop it or inform the police.

“It’s more than just a show that you follow the bad behavior to be out there to have a soundbite,” Deck-Brown said. “There’s a responsibility and accountability to tell the story, but to help prevent it also.”

What the owner of Clyde Cooper’s witnessed during the riots last weekend is also included in the must-read petition linked near the bottom of the ABC 11 article.  The petition includes a very long, angry message from Holt, who does not hold back on her thoughts regarding the absenteeism of the governor during the riots.

Roy Cooper walked with protesters on Monday, June 1, 2020. Why did he not come out two days ago, on Saturday night? Then, on Sunday night, protesters went to visit him at the governors mansion. Why didn’t Roy Cooper come out to see them? Was he scared? Why was he scared? I’ll tell you why – it’s because the evilest and most destructive things were happening to our wonderful downtown Raleigh! He was being protected, correct? Well, meanwhile, nobody was protecting the city of Raleigh, the small businesses downtown, or any business downtown for that matter. I saw first hand that we, business owners, had NO PROTECTION!

Holt’s outrage is shared and highlights the hypocrisy of the governor’s recent actions or lack thereof. I recently wrote about the governor’s double-standards in the response by Raleigh leaders and the governor between the Floyd protest and that of ReOpen NC.

But there’s more, and it is directly related to that walk the governor took.

ABC 11 reported on the Clyde Cooper reactions but also reported another story about one of the organizers of the protests downtown, James Conrad, who met with the governor and the Raleigh Police Chief about protester “demands.”

Conrad is one of the multiple groups that allegedly met with Cooper and was among the same protesters that Cooper decided to take a stroll down the block outside the executive mansion with.

As the crowd looked like they were breaking up @NC_Governor marched through. The crowd is now chanting “march with us”. @WNCN pic.twitter.com/3MdKtXbeCP

But that’s not the main point of my mentioning this story.  It’s about that original issue mentioned in the opening of this article: The selling of the subject of a story as ‘just an activist’ or run of the mill bystander.

ABC 11 either didn’t look or failed to mention that Conrad had an extensive criminal history, with 6 arrests prior to the one this week. And they were not the only outlet to do so. 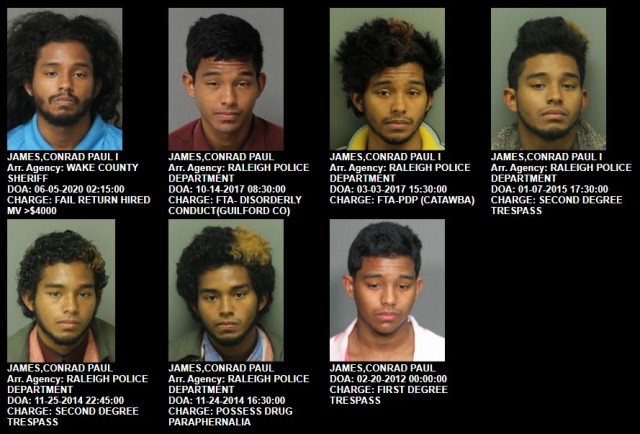 Left-leaning NC Policy Watch and far-Left IndyWeek’s reporting on his arrest were sympathetic in tone to Conrad and also made no mention of his extensive arrest record which goes back to 2012. The charges Conrad racked up range from criminal trespass in the first and second degrees to schedule 1 drug charges and disorderly conduct and span Wake, Guilford, and Catawba Counties.

For those who want to know more about this recent arrest, see my thread which begins with this tweet.

I had previously covered Conrad when he organized a protest during the day on June 2 in Raleigh. Here are the tweet threads documenting Conrad as the organizer and the march to the NCGOP.

In the first thread, I quote a News and Observer article that in 2018 he was shot during a drug buy. The article says that “detectives said Conrad James and Curtis Koenigshofer had driven to the apartment building at 511 Shelly Ridge Lane about 7:30 p.m. to buy narcotics from someone.”

In the second thread, I followed Conrad as he led the group to the NC Republican Party’s headquarters (NCGOP) which is not far away on Hillsborough street.

Several attendees approached him during Conrad’s Facebook Livestream of the event asking why they were going to the NCGOP and that this protest was not supposed to be political, it was “supposed to be about cops.”

Conrad replied that the NCGOP had criticized the governor for walking with them the day prior, on Monday. He also said they would “paper” the building with demands from the group.  In the end, Conrad had to settle for a dozen or so leaflets being left under the front door mat because no one had brought any paper to write demands on and no one had brought copies of the demands. At one point, he can be heard on his Livestream asking protesters to go into a nearby hotel to raid their office center for paper.

In closing, “Blessed are the peacemakers.”