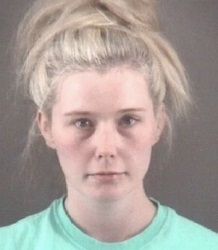 Sarah Melissa Wilson, age 25, was arrested for “aiding a juvenile student to possess” a handgun on educational property. The gun in question is a .25-caliber Raven pistol.

Police say Wilson kept the handgun in her classroom after the student brought it to her during the week of April 22. Police indicated that Wilson returned the gun to the student and according to court records, at least two juveniles ended up handling the weapon.

She gave a written promise to appear in Forsyth District Court on May 30th and was released from custody.

Wilson has worked as a language arts teacher since August 2017 at the Paisley Magnet School located in the Winston-Salem/Forsyth school district. According to school officials, she has been suspended with pay. Her teaching license was issued by the state on August 30, 2017, and expires in 2020 unless revoked.

“At Paisley, last week our team was alerted that a student may have seen a weapon on campus. Administrators worked to help police to begin conducting interviews to determine if indeed a weapon had earlier been at school,” said Interim Superintendent Kenneth Simington in a statement. “By early Friday, investigators communicated to us there was evidence that a weapon had been on campus and as soon as we had those facts, we alerted parents to the investigation.”

According to law enforcement, criminal charges against both juveniles involved in the case may be forthcoming.

A joint undercover sting named Operation Last Chance netted 10 people and among them was a Rockingham County elementary school teacher.

According to charging documents, Tulloch allegedly used a 2005 BMW X5 car for storing and selling cocaine. The indictment documents state that Tulloch trafficked “cocaine by possession of more than 400 grams of cocaine or any mixture containing cocaine.’’

The target of Operation Last Chance were local drug dealers in the Eden area and involved a coordinated effort by the Eden Police Department, the Reidsville Police Department and the North Carolina State Bureau of Investigation.

According to the district, the parents of Tulloch’s students were notified when Eden police told them about her arrest. Rockingham County Schools officials said that Tulloch is suspended with pay from her fourth-grade position at Stoneville Elementary School.

Tulloch’s North Carolina teaching license was granted by the state in July of 2017 and is set to expire in 2020 unless revoked beforehand.

Was this content useful to you? Help keep it coming.

A.P. Dillon is a freelance journalist and is currently writing at The North State Journal. She resides in the Triangle area of North Carolina. Find her on Twitter: @APDillon_
View all posts by A.P. Dillon →
This entry was posted in A.P. Dillon (LL1885), EDUCATION, Quiet Epidemic and tagged Quiet Epidemic. Bookmark the permalink.
Loading Comments...