Video has surfaced of an anti-semitic rap performance that was allegedly the ‘entertainment’ portion of a UNC-Chapel Hill hosted conference.

Filmmaker Ami Horowitz shot the video while attending a conference titled “Conflict Over Gaza” that was held on the campus of UNC-Chapel Hill during March 22-24. 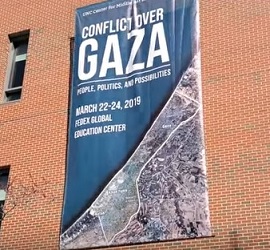 The conference was also co-sponsored by dozens of UNC affiliated groups and departments, including the Chancellor’s Global Education Fund, as well as Duke University.

The event was funded by taxpayers through a $235,000 federal grant.

The rap is performed by Tamer Nafar, a Palestinian ‘hip hop’ performer who uses music and humor to mask and then elevate the BDS movement’s blatant antisemitism and its anti-Israel/anti-Jew agenda. 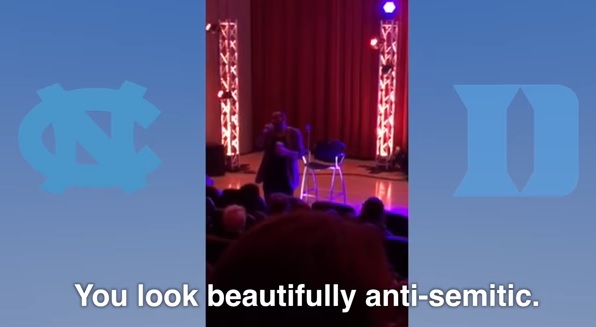 “Let’s try it together. I need your help. I cannot be anti-Semitic alone.” Nafar tells the audience in the video.

This video was produced by an individual who attended the “Conflict over Gaza” conference and recorded discussions with a number of attendees who were unaware he was taping their statements. The content was heavily edited, and the product as presented does not provide context as to the questions and the full, complete answers given. Moreover, we do not believe this video represents the spirit of scholarship at the event.

The conference brought together internationally recognized scholars and professionals from NGOs, think tanks, and academia to address a range of topics about Gaza from different viewpoints. The sponsors supported the event as an educational opportunity, and this video misconstrued the breadth of discourse that took place during the panels.

Our University is united by students, faculty, and staff from more than one hundred countries and represented by a diverse range of perspectives, traditions, and faiths. Diversity is an intrinsically vital part of shaping dialogue that can address complex issues, and we uphold a commitment to fostering a welcoming environment to people from all backgrounds.

Conferences such as this are organized by scholars who have academic freedom to develop the programming and invite their selected speakers and performers. UNC Global supports faculty in hosting these conferences without endorsing the beliefs of speakers or performers.

ABC11 provided UNC with the “raw, unedited version of the performance” and UNC doubled-down, replying with the original statement “with emphasis on the final paragraph.”

“I heard there was a conference going on about the conflict in Gaza, and my initial assumption was that it was going to be a hate-fest against Israel,” Horowitz told ABC11. “When I went there, that is what I found, but what I did not expect was for it to evolve into open anti-Semitism.”

Last Thursday, Duke University issued a joint statement from President Vincent E. Price and Provost Sally Kornbluth that addressed antisemitism in broad strokes but did not condemn what happened at the Gaza conference:

“We want to be very clear: antisemitism is one of the great scourges of modern life. Its resurgence, as demonstrated by the worldwide increase in hate crimes and incidents, is deeply troubling and should be of great concern to any civil society. “Whether it occurs on our campus, in our community, through graffiti, rallies or concerts, in conference rooms or courtrooms, we must all speak out forcefully against actions and statements that target and threaten members of our Jewish community. On our campus and beyond, the lines of politics, trust, activism and civility cannot become so blurred that we lose our commitment to mutual respect. We must guard against the danger that our passions obscure our common humanity, and we must remind ourselves that what injures any one of us injures us all.”

ABC11 reported that UNC Interim Chancellor Kevin M. Guskiewicz also issued a statement, but it only addressed the ‘rap’ performance and came after Duke’s condemnation of anti-semitism.

A performance during a recent conference held on our campus contained disturbing and hateful language. Like many members of our community, I am heartbroken and deeply offended that this performance happened. I stand steadfast against Anti-Semitism and hate in all its forms. The Carolina spirit is not about hateful language that divides us, but about civil discourse that advances ideas and knowledge. We must continue to aspire together to that ideal.

Going by Ami Horowitz’s video alone doesn’t give a full picture of just what went on at this conference.  After reading Peter Reitzes‘ 3-part series of the event at The Tower, it was far worse than Horowitz’s video shows.

Reitzes’ account of the conference highlights the dangerous gaslighting employed by the Boycott, Divestment, and Sanctions (BDS) movement, including speakers who are known to openly make anti-semitic blood-libel statements.

The full series which I have linked to below includes details about some of the panel sessions and gives a clear picture that is was not an ‘educational event’ or ‘exchange of ideas’, but instead a taxpayer-subsidized Israel bashing event.

In the very first installment, Reitzes noted that “None of the local organizations that educate and advocate for Israel were invited to participate in any manner in this conference.”

Hillel North Carolina issued its own statement on the group’s blog, which, in part, slammed the event as biased:

“A conference planned without a commitment to providing multiple perspectives results in bias, regardless of intent. Conference organizers selected largely like-minded speakers, including many who were on record as favoring boycotts, divestment and sanctions against Israel. It is no surprise that they left participants with an incomplete, inaccurate understanding of the underlying causes of suffering in Gaza. Substituting advocacy for academic discourse only serves to undermine academia’s highest principles.”

Days after the ‘Gaza conference’, fliers with Swastikas on them were found in the UNC-Chapel Hill Library and were also found drawn on the walls in the halls of at least one residence hall.

The fliers found referred to “an evil Jewish plot” and said “do everything you can to fight the silent covert Jewish attempt to enslave and kill good Americans,” according to a Facebook post about the fliers by North Carolina Hillel.

A.P. Dillon is a freelance journalist and is currently writing at The North State Journal. She resides in the Triangle area of North Carolina. Find her on Twitter: @APDillon_
View all posts by A.P. Dillon →
This entry was posted in A.P. Dillon (LL1885), EDUCATION, Higher Ed and tagged UNC Chapel Hill. Bookmark the permalink.