A Cumberland County high school teacher has been arrested for sexual relations with a student after being sought by the local law enforcement. 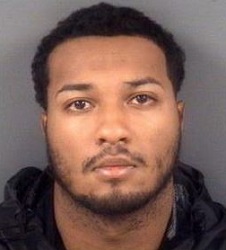 Dmitri Pelaez, age 30, has been charged with six counts of indecent liberties with a student and one count of sexual activity with a student.

Pelaez was being held under a $40,000 bond at the Cumberland County detention center.

According to the Cumberland County Sheriff’s office the investigation into Pelaez began on November 16 regarding “sexually explicit” text messages were sent to a 16-year-old student.

Three more victims have come forward to report “similar incidents” and those claims are also being investigated.

Pelaez, who is currently suspended, was a world history teacher and the boy’s junior varsity soccer coach at South View High School.

Pelaez is the second South View High teacher accused of having sexual contact with a student in the last two years.

In 2017, former South View track coach Matthew Aaron Holmes was charged with six counts of having sex with a student between November 2015 and February 2016. Holmes’ case is still ongoing and his license has not yet been revoked by the State Board of Education.

A.P. Dillon is a freelance journalist and is currently writing at The North State Journal. She resides in the Triangle area of North Carolina. Find her on Twitter: @APDillon_
View all posts by A.P. Dillon →
This entry was posted in CRIME, EDUCATION, LL1885, Quiet Epidemic and tagged Dmitri Pelaez, Matthew Aaron Holmes, Quiet Epidemic, South View High School. Bookmark the permalink.

3 Responses to Cumberland Teacher Arrested For Sexual Relations With Student