In the final installment in the American Lens series, Socialists Among Us, we take a look at three key players in North Carolina: Sendolo Diaminah, Todd Warren, and Anca Stefan.

Revisit the prior installments:

In 2016, the Durham School Board was considering changes to their meeting attendance policies. The primary reason was to accommodate one of their members, Sendolo Diaminah.

He had missed 9 of the last 13 meetings of the board due to “activism related travel.” According to local reports, “Diaminah told The Herald-Sun that he has missed meetings due to out-of-town travel as part of his work as a national organizer with the Black Lives Matter movement.”

Diaminah resigned his position and abandoned the Durham School Board in 2016. He told the News and Observer that he resigned to, “to focus on social justice issues and helping to defeat presidential candidate Donald Trump.”

His remarks run contrary to his purported reasons for wanting to join the board in the first place.

Diaminah went on to tell News and Observer that, “What I did not know when I ran for office was that during my term the Movement for Black Lives would erupt and that Donald Trump would run for president,” he wrote.

“Over the course of the last two years, my paid work as a trainer of Black social justice organizers around the country and my unpaid work building up organizations to defeat Trump have taken on incredible proportions.”

Diaminah has yet to respond on who is paying him for his organizing and protest activities.

All of this backstory is interesting, but what’s more interesting is that Diaminah is allegedly the General Secretary for the Freedom Road Socialist Organization (FRSO).  In addition, he is a leader of Peoples Durham (also known as Durham People’s Alliance), another socialist-themed organization.

Diaminah played the role of “community organizer” for the People’s Durham Neighborhood Project and Education Organizing. Of note, The Durham People’s Alliance, a socialist-themed organization, endorsed Sendolo Diaminah for his run for Durham Public schools Board in 2014.

Diaminah is involved with Black Organizing for Leadership and Dignity (BOLD). In part, his Bio at BOLD reads, “Sendolo Diaminah (aka Lola) is a butch queen organizer and aspiring movement strategist who has been practicing organizing and studying social movements/transformation for ten years.”

Diaminah participated and presented during a nationwide conference call organized by FRSO on Sunday, October 30, 2016. The topic of that call was “Revolutionary Strategies to Beat the Rising Right Wing.”

This call’s purpose was to define what is “the nature of this right-wing threat?” The event description continued and listed presenters,”Hear about these crucial questions from our panel of top political strategists, including Linda Burnham, Bill Fletcher, Jr., Nelini Stamp, and Freedom Road Socialist Organization national leader Sendolo Diaminah.”

Two comrades of Diaminah are Todd Warren and Anca Stefan. They were all arrested together at a protest staged by Organize 2020, the “Social Justice Caucus” of the NC Association of Educators in June of 2016. Bryan Proffitt was also arrested at that event.

Joining Stefan, Proffitt, and Diaminah in that round of arrests in June was Todd Warren.

Warren is the main leader of the NC Association of Educator’s Social Justice Caucus, Organize 2020. Warren is also a Spanish teacher at Guilford elementary school in Guilford County near Greensboro.

First and foremost, Warren is an activist, as he explains to interviewers in a video sponsored by Triangle Jobs with Justice; which another FRSO front group:

Warren is involved in the Guilford County Association of Educators (GCAE) and is currently running for President of the organization.

Given his promotion of teacher and student walk-outs, multiple arrests and socialist ties, it’s worth asking who Warren is running for – the county or to advance his political machinations? His campaign page even highlights his activism with the union based ‘Raise up’, a ‘raise the minimum wage’ protest group.

He also has ties to the Freedom Road Socialist Organization, Occupy, Progress NC’s Education protest outfit, AIM Higher NC, and according to his Facebook page, he participated in the Charlotte Black Lives Matter protests.

Warren has supported the Union push to raise the minimum wage called Fight for $15 and has been a regular supporter of the NC NAACP’s Moral Monday movement.

Warren’s wife is also an activist and was arrested on December 15th at the Moral Monday led protests against House Bill 2 at the North Carolina General Assembly. Todd Warren has also been arrested at a past Moral Monday event.

One of Warren’s Organize 2020 and FRSO linked associates is Anca Stefan. While not as high-profile as Diaminah or Warren, she’s seen her share of media moments.

Stefan is apparently of Romanian descent and currently works as a teacher at Lakewood Montessori Middle school in Durham, North Carolina.

She is a member of Organize 2020, was a member of Occupy Durham and has ties to the Freedom Road Socialist Organization.  Stefan models one of their t-shirts below. 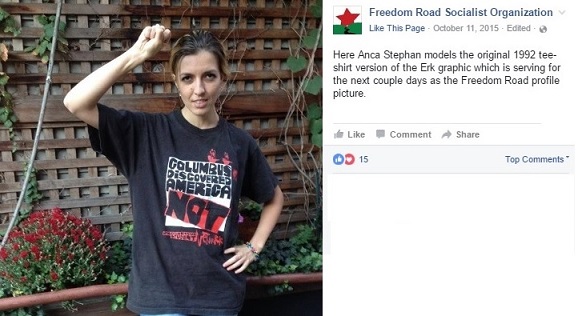 More recently, Stefan was involved in an Anti-Trump rally that took place at the Durham Farmer’s market.

In an interview with WNCN, Stefan said she was, “happy with the rally’s turnout” and that, “She believes in unifying the younger generation.”

“It’s encouraging to see people coming together and expressing that fear through and impulsive to unity. To embracing each other and to reaffirming the values we share and that we want to share in the future,” Stefan said.

So why does all of this matter?

Media outlets in the state keep referring to them simplistically as ‘activist’ or ‘teacher’ or characterizing them as just some generic citizen off the street. The way the media portrays them is misleading at best.

More importantly, all three of these socialists have ties to or are working within the North Carolina education system.  Parents, do you know who is teaching your child? Comrade or Educator?

Socialism and attempts at it being practiced have wrought more death and prolonged misery on mankind than any world war or plague. Why?  Socialism ignores the basic and primal facts of human nature and the human condition.

This article first appeared at American Lens News on January 25, 2017.

A.P. Dillon is a freelance journalist and is currently writing at The North State Journal. She resides in the Triangle area of North Carolina. Find her on Twitter: @APDillon_
View all posts by A.P. Dillon →
This entry was posted in Am Lens, POLITICS NC, THE LEFT. Bookmark the permalink.