While most were waving American Flags or ones with President Trump’s name on them, another group of people were holding banners of another kind – ones about stolen lives.

A man and a woman each took the end of a piece of a banner and extended it so that the names and faces printed on it were visible.

A young girl and an older woman unfurled a second banner. A third, fourth and fifth followed suit and a wall of these banners had suddenly been formed.

Moving closer to the banners, more text on the banner became visible and there was a grim realization that these smiling faces were all deceased.

Those holding the banners didn’t smile like the faces of the deceased being displayed.

Some had teary eyes, others have a stony expression. One woman trembled from what she describes as living with a “mixture of sadness and constant suppression of rage.”

These banners are just a few in a project called the Stolen Lives Quilt. 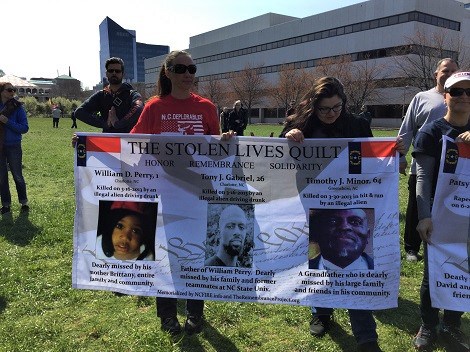 The Stolen Lives Quilt is an effort started by The Remembrance Project, which honors those whose lives were taken by illegal aliens.

According to the Remembrance Project website, the Quilt has reached over than 16 states since it began in 2012. North Carolina is one of those states and each one of the smiling faces on the banner in front of me was that of someone killed in the state by an illegal alien.

“The remembrance project is made up of families who are victims of illegal alien criminals,” said Johnson. “These people, all these faces you see here on the flags have been killed by illegal aliens in North Carolina.” 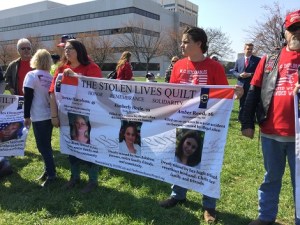 Johnson said that there have been over 200 since his group began tracking them in 2007.

Johnson said no one seems to know about these people because their stories are not being told by the media.

The Stolen Lives Quilts displayed at the March 5th March for Trump rally included the following people which span an age range of 18 months to 64 years of age:

Catherine Ann Webb Flores, 34
Shot to death by her illegal alien husband who then shot himself on 7-4-09

Adam James Kempf (12)
Killed by an Illegal Alien while attempting to board his school bus on 10-25-12.

Kimberly Hoyle (39)
Vehicular homicide by an Illegal Alien with no drivers license on 1-21-12.

Patsy Eason-Barefoot, 60
Murdered by asphyxiation by an illegal alien on 8-25-09.

Ronald “Ronnie” Dale Viehweger (40)
Killed by an Illegal alien who hit him while riding his motorcycle on 5-24-09.

Charles C. Clements, Jr. (27)
Father of 3 and Army Specialist who was on a 15-day leave from his tour in Afghanistan was shot by a gunman who opened fire in a Spring Lake restaurant 3-29-09. The gunman would later be identified as a Jamaican drug dealer who was in the country illegally.

William D’Ari Perry, 18 mos.
Killed via car crash caused by an illegal alien in Charlotte on 5-16-13.

A.P. Dillon is a reporter currently writing at The North State Journal. She resides in the Triangle area of North Carolina. Find her on Twitter: @APDillon_ Tips: APDillon@Protonmail.com
View all posts by A.P. Dillon →
This entry was posted in Am Lens, CRIME, EXCLUSIVE. Bookmark the permalink.
Loading Comments...