The Strained Relationship Between The News & Observer and Facts (UPDATED)

This article by SisterToldjah first appeared at American Lens News on Nov. 23, 2016.

With all the talk about “fake news” as of late, as well as the credibility hit the mainstream media took in the aftermath of the surprise victory of Donald Trump, you’d think news outlets would be taking concrete steps to make improvements in the accuracy of their reporting.

Restoring the trust between readers and journalists by reporting the facts would be a priority, one might conclude.

Such doesn’t seem to be the case with the Raleigh News and Observer (N&O). Like its sister publication the Charlotte Observer, change is difficult. Oh, not when it comes to demanding everyone else “overcome their discomfort” with change, like women who want to maintain privacy and security in bathrooms and fitting rooms. Instead, their problems relate to correcting their errors when they’re pointed out.

On Tuesday, the NC Civitas Institute filed a lawsuit against the NC State Board of Elections. In a nutshell, their complaint seeks to have same day voter registrants subjected to the required verification process before the election results are finalized. Unfortunately, that’s not how N&O reporter Colin Campbell chose to report it on his Twitter page: 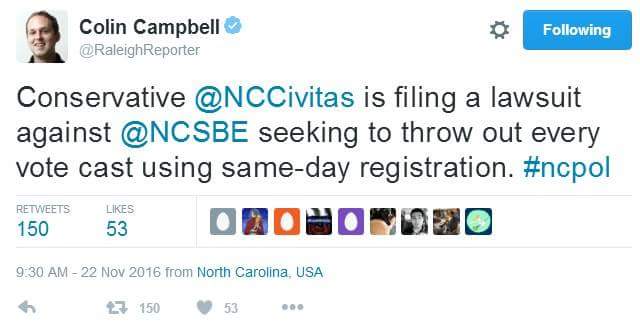 American Lens was the first to point out his error:

.@APDillon_ correct. This is from the @NCCivitas complaint to the NCSBE. pic.twitter.com/4vCo9Stp1u @RaleighReporter #ncpol #ncgov

Others, including WWNC’s Pete Kaliner, later notified him of the inaccuracy of the tweet as well. But as of this writing, Campbell’s tweet is still up and the retweet count continues to grow.

Undeterred, later in the day another tweet was published by Campbell in response to one from the state GOP.  And like the previous one on the Civitas lawsuit, he grossly mischaracterized it by inaccurately describing their issue with the N&O’s coverage as something it wasn’t:

Another #fakenews alert from the N&O. It's clear what NCGOP is asking for, & it's not for the paper to "stop" covering ProgNC. Smh. #ncpol pic.twitter.com/kE46jZdtVg

Conservatives have long complained that the N&O’s reporting on progressive groups in North Carolina is one-sided, incomplete, and favorably biased, with minimal balanced coverage and attention being given to their web of funding resources. The state GOP’s frustration with how these groups are featured, rather than scrutinized, in the N&O speaks to that.

This isn’t the first time, by the way, that the N&O has been alerted to factual errors in tweets – nor is it the first time those notifications have been ignored* (see update at the bottom of this post). It also should be noted that, unlike several of Campbell’s tweets on the issue, the reporting on their website about the Civitas case is largely correct.

Yet the branding of a news org is not just in what’s on their websites and print/audio/video media. It’s also represented on the public Twitter and Facebook pages their writers use to report scoops, teasers, and breaking news on behalf of their respective news outlets.

The accuracy of what’s reported there is just as vital as that of any piece that ultimately gets published, especially when you consider the growing number of people who get their news from social media sources.

If the N&O (or Charlotte Observer) wants to be selective in how they spin facts from a slanted perspective as it relates to current events on their editorial/opinion pages, that’s fine. But when it comes to objective news reporting, especially on important political issues impacting North Carolinians, it’s imperative that they do better.

*UPDATE* – 8:55 PM: Around 4 pm this afternoon, Campbell announced that he deleted his original Civitas tweet:

Deleted a tweet from yesterday that didn't properly describe @NCCivitas lawsuit. Full story if you were confused: https://t.co/2WhLY7zCzB

The staff of American Lens appreciates the correction.

A.P. Dillon is a freelance journalist and is currently writing at The North State Journal. She resides in the Triangle area of North Carolina. Find her on Twitter: @APDillon_
View all posts by A.P. Dillon →
This entry was posted in Am Lens, ELECTIONS, Media Bias, News and Observer and tagged Civitas Institute, News and Observer, Sister Toldjah. Bookmark the permalink.
%d bloggers like this: