A candidate for the North Carolina General Assembly recently sent out an email touting her arrest at a Moral Monday in 2013. 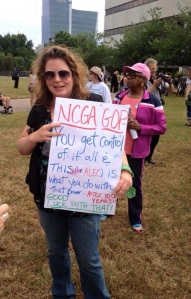 Jennifer Ferrell (D) is running against Nelson Dollar (R) for the district 36 house seat. In 2013, Ferrell made an unsuccessful bid for an Apex town council seat.

On September 26th, Ferrell sent out an email spotlighting the arrest and included a picture of her holding up an incoherent protest sign (See image).

In the email sent out by Ferrell, she says that, “As a woman, a mother to young children, and a concerned citizen, it was important to me to stand for justice and personal freedom for all.”

The email also says that Ferrell,  “will serve every constituent in every corner of this district with integrity.”

Well, for almost every constituent.

This site was likely lucky to get the email. In August, it was revealed that Ms. Ferrell has blocked nearly anyone who seems conservative on Twitter, myself included.  Her reason was that she

So much for representing all constituents.

Ferrell’s blocking activity even caught the eye of the News and Observer:

@jenfornc36 You do know voters who you blocked can’t talk to you, right?

Looks like #ncga candidate @jenfornc36 was not a fan of my story on Twitter blocking https://t.co/yBIrLrYZmF #ncpol pic.twitter.com/uUsbEvwmA3

The News and Observer noted that Ferrell called it ‘pre-emptive blocking’:

Ferrell defended what she called the “pre-emptive blocking of silent and vocal Twitter ‘trolls.’ ”

Others might call this a self-imposed ‘safe space’ from differing opinions.

A.P. Dillon is a reporter currently writing at The North State Journal. She resides in the Triangle area of North Carolina. Find her on Twitter: @APDillon_ Tips: APDillon@Protonmail.com
View all posts by A.P. Dillon →
This entry was posted in A.P. Dillon (LL1885), ELECTIONS, EXCLUSIVE, Moral Monday, NCGA and tagged NCGA. Bookmark the permalink.