Ok, so yesterday I posted a video about people in Times Square being asked who said a series of different quotes — was it Trump or was it Hillary? The vast majority guessed wrong.

A comment was left that got me thinking about just how many people believe Trump’s ‘whatever candidate lies’ bullcrap and truly have no idea where the other candidates stand. Twitter is littered with Trump supporters yelling ‘they lie’ at all other candidates.

Alternatively, I have to wonder how many Trump supporters know where Trump stands.

How did that feel, Trump supporters? To have me say that Trump lies? Made you mad? Well, now you’ve had a dose of your own medicine. Can we talk actual facts now?

There were several aspersions cast in the comments section of yesterday’s article. Let’s address some of them, shall we?

However, before we break down some ‘Cruz lies’, let’s be clear: Anyone claiming Cruz is ‘establishment’ needs their head examined.

From day one he has been in the Senate, he has represented the people and fought with the establishment on a regular basis. All one needs to do is to look at how much Lindsey Graham and John McCain hate him to know that is true.

The whole ‘Cruz is a liar’ theme is an Alinsky style deflection tactic. Period. Full Stop.

If Donald Trump has suddenly decided to break with his 40 year history of supporting, funding and defending liberals and their policies, good for him. Having said that, I’m not buying it. At all.

Now, on to the facts.

Did Cruz support it? Yes.  Free trade is a good thing, people.

Did Cruz change his mind and later oppose it? Yes.

One was Obama’s TiSA – a trade service agreement that bundled in changes to US Immigration law – was being bundled into TPA. This was a very big deal.  Cruz put in an amendment to block such immigration alterations.

The other was the favors and backroom deals being exchanged for votes. In particular, many were withholding support in order to get their way on the EX-IM bank.

Cruz was asked about TPP directly in a Townhall with Jeff Kuhner:

Here is what Cruz has said on TPP:

TPP is a specific trade agreement currently being negotiated by the United States and 11 other countries, including Canada, Japan, Australia, and New Zealand. China is not a negotiating partner. There is no final language on TPP because negotiations are still ongoing and have been since late 2009. Neither the Senate nor the House has voted yet on the TPP. There will be no vote on TPP until the negotiations are over and the final agreement is sent to Congress.

Cruz has not taken a position to support or oppose TPP yet.

There has been no vote yet and Cruz has said that TPP should not be voted on during a lame duck session.

Cruz said, “No conservative would want a bunch of members who have just been defeated or [are] retiring passing big government liberal policies with Obama in office. TPP needs to be voted on when members are accountable.” 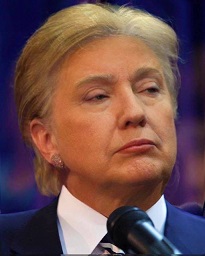 One of the most hilariously sad things being said is that Cruz supports Obamacare.

No. He doesn’t. He never has and has been the leading voice fighting it in Congress.

Trump not says he hates it and Cruz loves it. That’s hilarious given Trump’s own statements on Obamacare.  Trump has recently has said he favors a ‘market-based solution’, yet doesn’t give a single detail about said solution.

Trump is Hillary on healthcare. His recent 180 course change comes after his support of Obamacare. Where was Trump when Conservatives were calling out all the problems with it years ago? He was funding the Democrats pushing it, that’s where.

Heidi Cruz is an evil Goldman Sachs employee
Yes, she works for Goldman Sachs in Houston. So? She’s taken a leave of absence while the campaign is on, by the way.

Are we now vetting the jobs of wives because someday their husband might run for President?  Get real.

Every single politician has ties to one investment firm or another. So does every single person in this country who has a 401k or IRA. Get over it.

Yes, I said bullcrap, because it is.  I mean, really people?

How hard is it to understand Cruz’s mom was an American citizen and therefore he is a natural born United State Citizen?

Every single bullcrap (yes, bullcrap) court case challenging his status so far has ruled that he is a natural born citizen. These court cases are again, Alinsky style distractions. The latest rulings were in Illinois, Florida and Pennsylvania.

Fact: He is natural born, not naturalized.
Fact: The Cruz family moved to Texas when Cruz was four years old.
Fact: Cruz has said that when he was a child, that his mother told him that she would have to make an affirmative act to claim Canadian citizenship for him.  As such both he and his family assumed that he did not hold Canadian citizenship and never pursued it until said citizenship was  proven in 2013.
Fact: On May 14, 2014 Cruz filed to officially renounced his Canadian citizenship.

Common Core
The claim Ted Cruz supports Common Core is positively the most amazing lie ever. In no way, shape or form has Cruz ever supported Common Core. He’s been opposed to it from the start and has a good grasp on the fact our Department of Education is totally out of control.

I personally spoke to Cruz last June about Common Core and the Department of Education when he was in Raleigh for the GOP convention.  I literally sat one chair away from him and got to question him on it.  GO READ.

Donald Trump has taken Cruz’s position on Common Core as his own. That’s not conjecture, that’s fact.

What Trump supporters may not know is that Trump has Bill Bennett whispering in his ear about Common Core and Education.  Bennett is a paid Common Core shill.  Governor Abbott took Bennett to task over a year ago on Common Core. 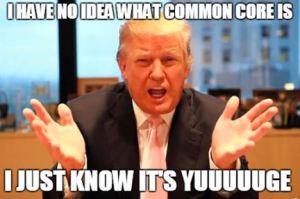 What Donald Trump knows about Common Core and education can fit on the head of a pin.

His use of Common Core as a rallying cry is a slap in the face to millions of parent who have been fighting Common Core for the better part of five years now.

A.P. Dillon is a freelance journalist and is currently writing at The North State Journal. She resides in the Triangle area of North Carolina. Find her on Twitter: @APDillon_
View all posts by A.P. Dillon →
This entry was posted in ELECTIONS, Issues, LL1885, Random Musings and tagged Donald Trump, Ted Cruz. Bookmark the permalink.

8 Responses to Trump Lies, you know.